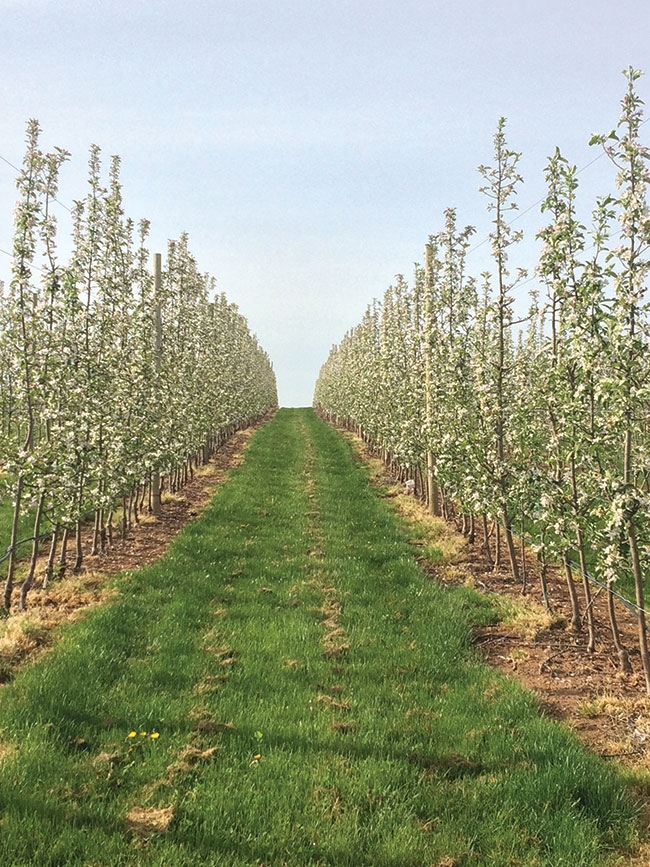 Tour guide Chris Duyvelshoff, tree fruit specialist with Perennia, listed the considerable benefits of fall application of pre-emergent herbicides on orchards, including an early start on weed control during the weed-free period [from bud break to 30 days after blooming], not having to spray during the busy spring season, and better residual weed control with some herbicides.

Eisses has new B10, G935 and G202 rootstocks, plus the well known M9, B9 and M26 rootstocks, said Duyvelshoff, adding Eisses’ typical row planting has been 10-feet wide, but with a recently planted Ambrosia block at nine feet. It is a small, upright tree and shouldn’t have any vigour control issues, “but he won’t plant at nine feet again.”

The NSFGA tour also visited Andy Parker’s Cap Farms in Grafton, where he planted a tree wall of Ambrosia in 2013. The tree walls are 11 feet apart, which Parker believes is well-spaced for his harvesting-aid machine and the Ambrosia tree size, Duyvelshoff said.

Since the trees are two feet apart, with their size and their wall spacing, it is easier to estimate the tree wall’s crop load, Duyvelshoff said, adding that Parker tries to thin to about 50 apples per tree.

Crisp Growers Inc. Orchard in Morristown, jointly owned by several Annapolis Valley apple growers and managed by Andrew Stirling, was another stop on the tour.

The operation has many bench-grafted trees. “More growers are growing their own trees due to a shortage of nursery trees across North America,” Duyvelshoff said. “You get a bigger tree by bench-grafting. It is a little more time-consuming and it is not as uniform a growing tree as produced by T-budding.”

At Kelly Penner’s Nazinga Farms in Aylesford, a bud-in-place feasibility study is looking at orchardists growing their own trees rather then buying finished nursery stock.  The advantage of budding in place at the final tree spacing is there is no transplant shock, Duvelshoff said, but “you have to grow it like a nursery tree and, at the final spacing, it is more time and labour consuming. You also have more variability in tree size and they are not as consistent as nursery trees.”

At the final orchard stop – Melvern Square’s Spurr Bros. Farms, managed by Lisa Jenereaux – tour members examined the top-working grafts she did with Honeycrisp onto 111 rootstock.

“She found it was very productive, the main challenge being vigour control because they are older rootstocks,” Duyvelshoff said. “We looked at a fertilizer trial, evaluating N rates on newly planted trees. We didn’t have a response to N beyond 20 grams per tree, regardless of N sources or single versus split applications.”

During the tour’s lunch stop at Lloyd Dyck’s Apples and Spice Orchard in Waterville, Blake Sarsfield, NSFGA president, and Peter Eisses, chairman of NSFGA’s production committee, presented Duyvelshoff with the NSFGA’s Golden Apple Award for his contributions to the industry.

Michelle Cortens is Perennia’s new tree fruit specialist. She is a graduate student of the University of Guelph’s Ontario Agricultural College where she worked as a research assistant, followed by a stint as an extension assistant at the Ontario Ministry of Agriculture and Rural Affairs in weed management. Cortens was also involved in writing teacher-assistance material.