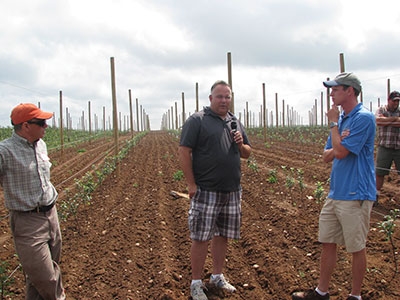 Nova Scotia apple producer Andy Parker is developing a high density orchard through the bud-in-place technique by grafting tree buds into rootstocks already planted in his orchard rather than into rootstocks in a nursery.

This is a rather unusual method for Nova Scotia, observed Chris Duyvelshoff, a tree fruit specialist with Perennia, adding that bud-in-place is cheaper than budding nursery rootstocks and there is no transplant shock. Nursery budded rootstocks will give a couple of years extra growth resulting in earlier fruiting, he said.

According to Parker, the block in which he budded the newly planted rootstocks already looked like a nursery. “So, why not make it your nursery?” he said.

“In bud-in-place, you may lose a tree to fire blight but if the fire blight gets into a nursery to infect a tree, you will likely lose adjoining trees,” Parker said. “From a financial perspective there is much
less risk.”

He currently has a new block of the club variety Pizzazz budding-in- place as he was informed he’s be unable to get nursery stock until 2016. It is all on M26, except for one row of B9.

“I would rather fight vigor than budding,” he said in reference to M26.

Rob Haynes, of Mori Essex Nurseries in Ontario, recommended controlling for fire blight in rootstocks in the nursery, noting that Quebec growers have encountered problems with fire blight in their rootstocks.

He also suggested using Geneva rootstock, which will give faster growth.