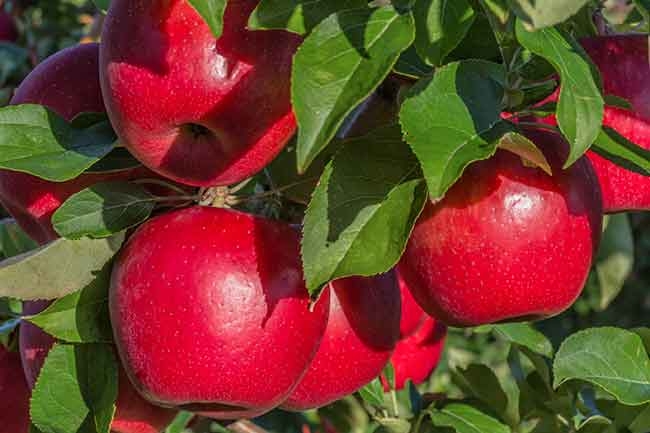 Crisp Growers Inc. is currently trying to make good economic decisions, which means getting high-value cultivars, such as Honeycrisp, into the ground. Photo: Dreamstime

David Cudmore, CEO of the Scotian Gold Cooperative, explains that some 14 Nova Scotia apple growing families and Scotian Gold members, not wanting to see those acres go out of production, banded together to sell shares in the newly-formed company, Crisp Growers Inc.

It now has 26 shareholders, including Scotian Gold, as a minority 13 per cent shareholder, says Cudmore, adding it is governed by a seven-member board of directors.

“He grew up in an apple growing family,” says Cudmore. “The whole idea is we are trying to make good economic decisions in what we are doing.”

Right now, that means getting high-value cultivars into the ground.

“It is Honeycrisp right now.”

Most of the planting is at 1,000 trees to the acre, says Cudmore, adding that Crisp Growers’ modernization plan removed 140 acres of McIntosh, Cortland, Ida Red and Golden Delicious in 2014 while retaining 100 acres of McIntosh, Honeycrisp and Ambrosia on 12 by 20 foot spacing.

Cudmore notes Crisp Growers has a planting pattern of four rows of Honeycrisp adjacent to two rows of Gala, Ambrosia and Sonya, all cultivars that can act as pollinators.

He says the Annapolis Valley doesn’t grow a lot of Gala.

“We have trouble getting the size in the fruit and it is susceptible to fire blight. But it is the largest selling variety in North America.”

Crisp Growers is prepared to take a chance on Gala – for now – because it sells well, says Cudmore. But, because of the heightened risk of fire blight, “we may not encourage growers, in future, to grow Gala. If the fire blight can’t be controlled, we can understand more growers not wanting to grow it.”

Since 2014, Crisp Growers has brought in 60,000 nursery rootstocks but have planted few of them, he says.

“We had some issues with the quality of the rootstocks we received.”

“If bench grafts work, you get an extra year of growth,” says Cudmore.

Perennia tree fruit specialist Chris Duyvelshoff says Crisp Growers have a model of planting high-value cultivars at a high density. He also notes budding-in-place rootstocks are less expensive than transplanting bench grafted nursery trees. Also, if they have a “successful take,” the trees don’t get the transplant shock that nursery stock does. Nursery trees, he adds, are also very difficult to obtain.

But Duyvelshoff warns growers to be careful when applying herbicide control products around budded-in-place rootstocks as it can damage the young trees. Nursery transplant trees are also very sensitive to herbicides, which creates a very limited range of vegetation control products that can be used, he adds.

“A lot of hand labour will be required in weed control near a new planting, especially where bud-in-place establishment is used,” says Duyvelshoff.

In 2014, Crisp Growers also planted a small trials plot of multiple leader Honeycrisp for evaluation but Cudmore was not impressed by the response of the planting as it seemed to slow tree growth. For now, he says any further planting the operation will do will be on single leader.

Duyvelshoff agrees, observing, “there is not much to see yet.”

Last year, Crisp Growers planted Honeycrisp, Gala, Ambrosia and Sonya on Budagovsky 9 rootstocks at a spacing of 2.5 by 12 foot or on M9 at a five foot by 14 foot spacing. All new planting will be on 12-foot rows with the plan to develop a high density annual planting of 25 acres in a tree wall, Cudmore says.