Fox Seeds, a private firm formed by the Asparagus Farmers of Ontario (AFO), continues to grow sales in Canada and beyond 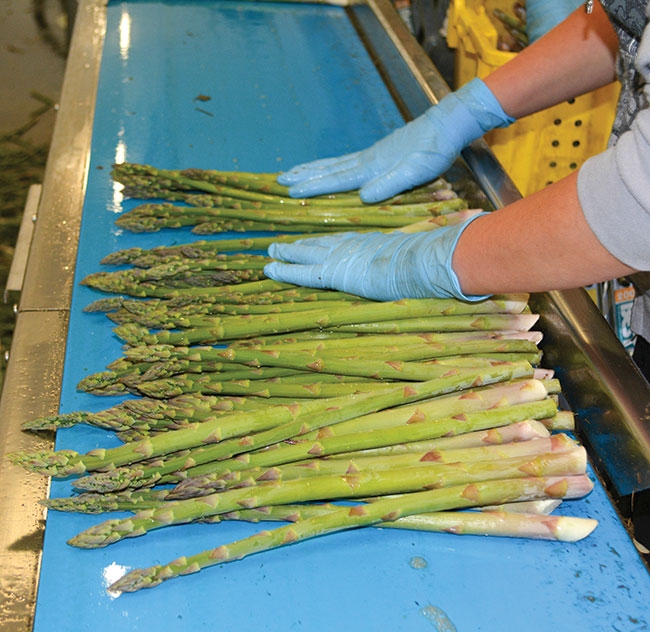 Fox Seeds is currently putting a lot of effort into building visibility for its asparagus varieties in Europe with the assistance of its European distributor, Global Plant Genetics (GPG). Contributed photo

Love for asparagus is growing in the U.S., Canada and Europe, which is music to the ears of those at Asparagus Farmers of Ontario (AFO) and its offshoot seed firm, Fox Seeds.

It was back in late 2012 that the Ontario Asparagus Growers’ Marketing Board changed its name to AFO to reflect a ‘grower first’ philosophy. At the time, a new governance structure was also created, and Fox Seeds was formed. Executive director for both entities, Bernie Solymár, came on board in 2013. He indicates that, because AFO is a not-for-profit organization regulated under the Ontario Farm Products Marketing Act, selling seed would have to be done under a private corporation. Fox Seeds got its name from the type of sand found in Norfolk County, where a large percentage of asparagus is grown in Ontario. The University of Guelph’s breeding program for the vegetable is also located there.

Fox Seeds provides a royalty to the University of Guelph in exchange for rights to grow and sell seed for Guelph Millennium (a winter-hardy, long-lived and high-yielding variety developed by Dr. Dave Wolyn of the University of Guelph about 20 years ago), Guelph Eclipse (which debuted in 2017) and Guelph Equinox (release set for 2020). Fox Seeds has had very strong success in selling Guelph Millennium seed – about 95 per cent of asparagus grown in Ontario and Quebec (where most Canadian asparagus comes from) is that variety. About 75 per cent of existing Michigan cultivation is also Guelph Millennium and 80 to 90 per cent of new planting there as well. Millennium is also the dominant variety sold in Washington State over the last three years. Lastly, sales are off to a good start in Europe (more on that later).

“Guelph Millennium is an excellent variety that provides strong production at the start of the season,” Solymár explains, “but growers are interested in additional later peaking varieties, as well ones with enhanced disease control, more cold-hardiness and drought tolerance. Guelph Eclipse is very productive and has better tip quality, a very tight tip, and significantly thicker spears, which are particularly desired by growers in Michigan. Trials are showing that Guelph Equinox is similar to Guelph Millennium and it’s very exciting that in trials, its production per acre is 50 to 100 per cent higher than Millennium.”

Fox Seeds is looking at potential new markets across the ocean for all three varieties, and others are being tested for possible commercialization as well in the UK, Poland, northern Spain, northern France and Germany. In addition, research trials are ongoing or in the works in Chile, Japan, China and Russia.

“Dr. Wolyn has been breeding new asparagus varieties for 28 years,” Solymár explains. “The breeder does the initial crosses and early trials, and when there are varieties identified with potential, we produce small amounts of seed and then grow for seed in commercial plots.”

Solymár is particularly excited about expansion in Germany, where they grow about 20 times the amount of asparagus grown in Ontario.

“German asparagus growers produce predominately white asparagus, which is just green asparagus with soil mounded over it, so the spears never see sunlight and turn green,” he explains. “It’s milder tasting than green asparagus and must be peeled. Because younger consumers nowadays don’t want the inconvenience of peeling and they associate green colour with health, there is an increasing demand for green asparagus. The white varieties don’t do as well when grown as green, and we believe we have a superior green variety in Guelph Millennium.”

While Millennium is not what would be yet considered well known in Europe, Fox Seeds is currently putting a lot of effort into building visibility with the assistance of its European distributor, Global Plant Genetics (GPG).

Fox Seeds is currently putting a lot of effort into building visibility for its asparagus varieties in Europe with the assistance of its European distributor, Global Plant Genetics (GPG).

“We’ve had a long history with Jamie Petchell of GPG, he’s known as Mr. Asparagus over there, so we had no challenge in finding a good distributor,” says Solymár. “Together we’re using social media, putting in a presence at tradeshows, and also providing seed to nurseries and growers to test.”

Since Solymár started at Fox Seeds, he says the focus has always been on producing enough seed to meet demand.

“With Guelph Eclipse, as with any new variety that’s introduced, it takes a few years to get seed production where you want it, but we’re getting there,” he says. “Our challenge now is to continue to develop new markets and, like any company, we want to increase profits and increase sales. The demand for asparagus has been very strong the last three or four years because it’s become more popular and people also want to buy local. The U.S. exchange rate has also meant good export profits. But while Fox Seeds has had few challenges and great success, at the asparagus industry level, challenges are coming with the new minimum wage rate in Ontario for example, and current NAFTA negotiations may have significant negative impacts.”

It’s been a varied road to AFO and Fox Seeds for Solymár, who has 12 years of extension experience with the Ontario Ministry of Agriculture, Food and Rural Affairs and 12 years as a private consultant. For several years, he provided expertise to the Canadian Horticultural Council’s Apple Working Group in developing their Integrated Fruit Production project, and also did field research testing novel biological control agents.

“I think my two roles at AFO and Fox Seeds compliment each other,” he says. “The evolution of Fox Seeds has been very exciting because we’ve had a product in hot demand. We’ve been able to move quickly to build market share and we have a very solid basis to increase our sales in many markets around the world.”