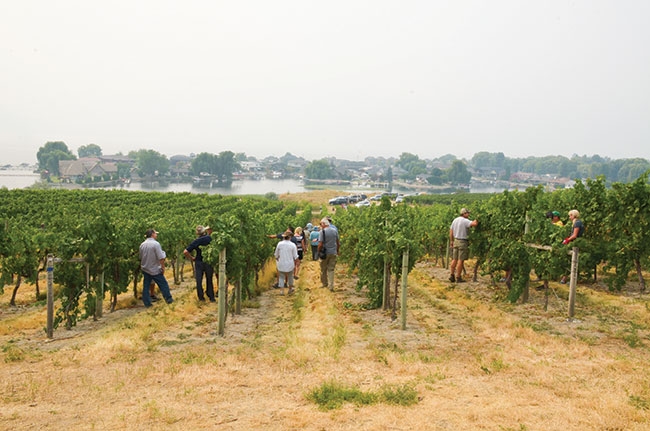 A pallor of smoke from the worst fire season ever in B.C. cast an eerie fog-like cloak over Okanagan Lake and the vineyards.

B.C. grape growers and winemakers were treated to a day in the vineyard with an Italian viticulture expert, as part of the Triggs International Premium Vinifera Lecture Series.

Stephano Poni (PhD), professor of viticulture and chair of the Instituto of Frutti-Viticoltura of the Università Cattolica del Sacro Cuore of Piacenza, Italy, used the West Kelowna vineyards of Quails Gate and Mission Hill wineries as a backdrop to share and discuss canopy management best practices in early August.

Organized by Brock University Cool Climate Oenology and Viticulture Institute (CCOVI), the lecture series features world leaders in the cultivation of premium vinifera grapes, thanks to a generous donation by Don and Elaine Triggs to the CCOVI.

Poni’s visit to the Okanagan followed a similar event in Niagara-on-the-Lake in Ontario. He also presented a public lecture at both locations. This was the 10th Triggs event in Ontario and the fourth time the program has been offered in B.C.

“We acknowledge the generosity of Don and Elaine Triggs for supporting this program,” said Debbie Inglis, director of the CCOVI at Brock.  “It gives us much food for thought as the industry continues to grow in B.C. and Canada.”

While the Okanagan valley was in the midst of one of the longest stretches without rain on record, the Ontario organizers were happy to escape the rain and cool temperatures that were causing mildew issues and threatened to slow ripening back home. A pallor of smoke from the worst fire season ever in B.C. cast an eerie fog-like cloak over Okanagan Lake and the vineyards.

“Currently, in Italy, we are having a very hot summer, it is over 38 C,” Poni said by way of introduction. “So, I am asked to do the opposite back home as you are doing in Ontario.

“In Italy, we must often try to delay ripening, not achieve ripening. We are researching canopy management practices to delay sugaring but not delay the other processes, like colour and aroma.”

“In Italy, we must often try to delay ripening, not achieve ripening. We are researching canopy management practices to delay sugaring but not delay the other processes, like colour and aroma.”

Quails’ Gate vineyard manager, Jo Breti, explained the various chardonnay clones that were planted as early as 1987. He described the soil as much like the lake – sand, clay, and silt for over 50 feet. The site had not yet been irrigated by early August. Although it is some 50 metres above the lake, spring floods had raised the water table and the vines were only just beginning to show signs of dryness.

Poni addressed the Scott Henry training system that was employed in the block, which divides the leaf canopy vertically, with shoots growing up and down.

“Where vigour is high, it is a good system,” he said. “It provides a nice balance between a reasonably high yield. It has high leaf area, so you have enough leaf area to crop a higher yield but, at the same time, you have a good cluster exposure.”

When does vigour become high enough to justify a divided canopy, Poni asked. He said it disappoints him when the training system does not match the growing conditions on a site. Correctly balancing the vigour is essential for maintaining the lowest inputs and getting the maximum return.

Correctly balancing the vigour is essential for maintaining the lowest inputs and getting the maximum return.

“One difference I noticed with the Scott Henry we looked at in Ontario is how the bottom part of the canopy is managed,” Poni said.

He pointed out that at this Okanagan site, the bottom shoots were in essentially a vertical position.

“Another option is to have the bottom shoots a bit shorter and mostly horizontal. That would give the advantage of a mixed canopy with vertical plane plus horizontal plane. We know from experience with old traditional systems, like the pergola type we have in Italy, that a mixed canopy is rated as the most effective at intercepting light.”

Joe Breti and Poni joked back and forth about how winemakers drive the viticulture decisions in the vineyard.

“Winemakers will often say that if we increase yield, we automatically decrease quality,” said Poni. “But that is not always true.”

A mild increase in yield may be needed, he added.

“A slight increase in yield might be what you need to control vigour and increase quality. This is an old principal and we need to be aware that in many cases a difficult problem may have a simple solution.”

The issue of canopy density is one of the oldest ones, Poni said, and if you ask different people, you will get totally different answers.

The issue of canopy density is one of the oldest ones, Poni said, and if you ask different people, you will get totally different answers.

“We know in a lot of instances, any canopy having two to three leaf layers can be optimum,” he said.

For the simple reason, three leaf layers are enough to intercept and hold the light but at the same time is not too dense.

“A grower comes to me and says ‘I have eight layers, the three you recommend and I have five more,’” Poni joked. “That is not the same thing. At night, you have a much higher night time respiration and the CO2 balance gets worse when you have increased leaf area.”

With a high canopy density, you might spoil quality due to a microclimate affect, he warned.

Poni described a study in Italy evaluating the optimum canopy in a given trellis. Using a sprawl canopy, they started with 13 square metres of leaf area. It was a vine with 1.5 metres of cordon.

“We started to pull out leaves from the inner part of the canopy to see what was the optimal area and we monitored it with a gas exchange system,” he explained. “We were actually able to remove up to four square metres of leaf area without affecting photosynthesis.”

That study showed the four square metres they removed were excessive for the vine balance.

“We have a golden rule in viticulture that you need approximately 1.5 square metres of leaf to ripen a kilo of fruit,” Poni said. “I can tell the grower with that six metres of leaf area he can profitably ripen about four kilos of grapes. Of course, we would need this information for each variety and for each trellis system.”

The aim for a Scott Henry system is to keep an 8-inch window open between the upper and lower canopies. While it is commonly assumed that upper row quality would be better it is not necessarily so, said Poni.

“When you have an open window, you have light penetrating down through the canopy. If the bottom canopy is slightly horizontal, you should have enough light to achieve ripening. Remember, photosynthesis is the guy who is producing the grapes.”

Kevin Usher shared the positive effects of leaf removal on Syrah vines, part of five years of continuous trials.  “Using pre bloom removal in Syrah we were getting up to about 60% crop load reduction, mostly through the abortion of berries during fruit set,” explains Usher.  The cluster physical size remained the same as did berry size, but the cluster was much looser he says.  “We didn’t see any gains on fruit ripeness, but we did see big differences in phenolic development so flavanols, tannins, anthocyanins, these sorts of things.”

“When we did leaf removal at fruit set you don’t see all those physical changes happening, but you get the quality changes,” he says. “Though not is not as extreme as we saw at pre bloom leaf removal.”

There are different goals for leaf removal with white varieties he explains.  “But what we have been finding is later leaf removal can actually help with developing flavor and aroma.”

There are different goals for leaf removal with white varieties he explains.  “But what we have been finding is later leaf removal can actually help with developing flavor and aroma.”

Jose Ramon Urbez—Torres spoke about monitoring trunk vine disease spores to help manage what he considers one of the most important grape diseases in Canada.  “We don’t have any registered products for controlling trunk vine disease in Canada so we are doing research to try to bring in some products,” says Urbez-Torres.

“One of the experiments here, is trying to understand how the disease works in the Okanagan valley,” he says.  He uses solar powered spore trapping devices that work 24/7, at five locations across the valley.

The pathogens form on the trunk of the vine and at the right combination of rain, humidity and temperature, the spores discharge and enter the vine through pruning wounds.

“We see the first peak of spores around the beginning of March,” says Urbez –Torres.  “We want to know when there is a higher load of spores throughout the growing period, so we can recommend when growers should apply controls to protect the pruning wounds.”