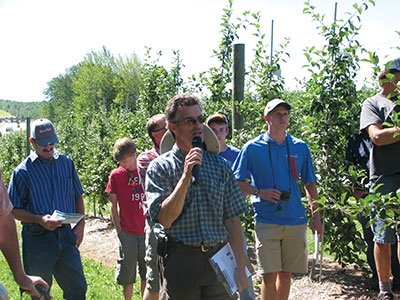 At Eisses Farms Ltd. in Centreville, John Eisses has a newly established fruit wall, one of the first in the Annapolis Valley. In cooperation with Perennia, the provincial agricultural consulting agency, a crop load management trial is underway on his fruit wall. Eisses has 140 acres of orchard and active replanting program on semi-dwarf rootstocks. Some of the new blocks he is planting are on land that previously was not in orchard.

At the trial site, on the fruit wall, the trees are Ambrosia on the M9 rootstock in a two-foot by 12-foot tree and row spacing.

The closely planted trees in the wall are pruned closely to maintain a narrow canopy to encourage sunlight penetration to promote apple production.

Duyvelshoff added that during the summer of 2013, they examined the timing on pruning to encourage fruit bud production.

He suggested the optimal time for pruning to encourage fruit bud growth would be between the six and 10-leaf stage of canopy growth.

At another pruning trial site using Gala, the response was very similar, he noted.

In their hedging of the Eisses fruit wall, there was very little damage, reported Duyvelshoff.

“The overall amount we cut off was quite small because the trees were already quite narrow.”

He added they also hand thinned the fruit wall to encourage colour in the fruit from increased sunlight exposure.

“We will be also looking at the timing of hedging to see if it encourages flower bud development and more fruit next year.”

Duyvelshoff hopes in 2014 they will be looking at tractor-mounted hedging trials.

Crop load management trials on blocks of Honeycrisp on EM 26 and Ambrosia planted in 2006 are underway in the Noggins Corner Farm orchard in Greenwich of Andrew Bishop.

Doug Nichols, a tree fruit researcher with NSFGA is working on the trials with Dr. John DeLong of the Agriculture and Agri-Food Canada Kentville research centre, said the trials block produced a nice crop of Ambrosia in 2012.

That Ambrosia crop, however, required a lot of hand thinning, he said.

“We haven’t yet got the formula for thinning just yet.”

The Ambrosia also received an application of Promalin at petal fall and Maxcel at the 10 to 12 mm size of the fruitlets to reduce crop load and increase fruit size and quality.

Dr. DeLong added crop load management and the maturity of the fruit as it enters storage are important factors in crop quality.

He said their plant growth regulator trial used new, experimental thinners – ACC and Protone – that are not yet registered and available in Canada.

“ACC is a hot thinner,” he said. “ACC and Protone together mercilessly thinned the fruit.”

Dr. DeLong added researchers will have to work on the application rate and rate of efficacy in trials next year.

Nichols added the ACC and Protone were applied 15 days after full bloom and within seven days after the application fruitlet and leaf drop were observed on both treatments with ACC and to a lesser extent with Protone alone.

He noted, however, Protone applied with Fruitone, prevented leaf and early fruit drop.

Currently, Protone is only registered in the U.S. for colouring in grapes and there is no registration for ACC, said Nichols.

“If we can encourage Valent (the manufacturer of ACC and Protone) to fast track registration, it will be to our advantage,” he added.

ACC, an aggressive thinner, stressed fruitlets, “like anything we have ever seen before,” Nichols said.

Applied with Protone, the July fruit drop results showed “trees that were all but completely de-fruited,” he added.

He has a crop load management trial underway at Andy and Gail Parker’s farm, applying the Valent products as well as MaxCel 30 days after full boom.

Nichols tried MaxCel to see how it would work in a late thinning environment.

ACC, he observed, thinned even more aggressively 22 mm fruitlets than 13 mm fruitlets, which suggested to him they should look at reducing its application rate. Seven days after the ACC treatment, leaves and fruitlets were on the ground and this concerned Nichols because leaf loss can mean reduced fruit set next year.

“We will be assessing fruit that goes into storage for any ACC carryover.”

In passing, Nichols noted there was a problem with tree collapse in one row of Royal Gala dead from collar rot, “which is a problem in wet sites but this is a very dry soil.”

Robert Haynes, general manager of the Mori Essex Nurseries of Niagara-on-the-Lake, Ont., who was on the NSFGA orchard tour, observed that Geneva rootstocks are resistant to phytophthera root rot.