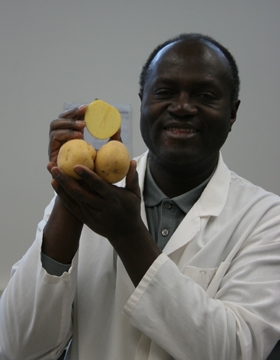 The new potatoes – called AAC Confederation and AAC Canada Gold-Dorée – were recently named by Progest 2001 Inc. based out of Sainte-Croix, Quebec, and Canadian Eastern Seed Growers Inc. based out of New Brunswick, respectively. The “AAC” in both names is a nod to their AAFC origins!

Both company presidents are really excited about the commercial potential these potatoes possess and feel they could rival Yukon Gold. AAFC potato breeder Dr. Benoit Bizimungu couldn’t agree more and describes both potatoes as having good yield and disease resistance profiles that makes them more profitable to produce and can be considered an improvement on Yukon Gold.

“Taste and texture are important,” said André Gagnon, president of Progest 2001 Inc. “We need tasty special potatoes that fit customer needs. We feel that AAC Confederation has the potential to become a popular yellow variety for consumers.”

When naming AAC Canada Gold Dorée, André Côté – co-owner of the Eastern Seed Growers Inc. with his brother, Eric Côté – said they were inspired by this potato’s golden colour when choosing its name.

“We chose AAC Canada Gold-Dorée for its golden flesh and its golden potential as a winner in the markets.”

Both AAC Confederation and AAC Canada Gold-Dorée are graduates of the AAFC potato breeding program, based in Fredericton, NB.

“A lot of work goes into developing a new potato variety,” said Dr. Benoit Bizimungu, a research scientist with AAFC. “For instance, the AAC Canada Gold-Dorée was six years in development before being released in 2015 to the potato industry to be evaluated of commercial potential. It is no surprise that the potato was taken up so quickly by the industry because it has great attributes.”

Dr. Bizimungu believes this latest licensing demonstrates the breeding program is making progress in identifying the kind of potatoes the industry needs and shows the value of the department’s national breeding program.

Each year under the Accelerated Release Program, AAFC releases 10 to 15 potato selections during a special Potato Release Open House for industry to consider.

These potatoes provide options to best meet the needs of Canadian consumers and producers. If industry likes what they see, they can conduct field trials of the selections and eventually bid for sole evaluation rights.

As for AAC Confederation and AAC Canada Gold-Dorée, the two companies expect to begin selling seed for the two new varieties by 2020.