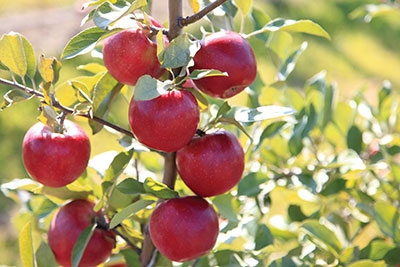 Known for its crispy texture combined with a sweet and juicy flavour, SnapDragon has a distinctly bright red dappled colour.

Unlike many other produce items, apples are commonly sold by variety and consumers have shown a continued interest in trying new apples that offer unique colours, flavours and textures. SnapDragon has a limited crop this year but supplies are expected to increase
in 2015.

“This bi-colour apple is a hybrid of a Honeycrisp that has excellent quality, storage and shelf life,” stated Jeff Crist, vice chairman of the board of directors of NYAG.  “Our consumer research revealed that consumers not only responded very favourably to SnapDragon’s crisp texture and sweet taste but also noted high willingness to purchase.”

Because of the super sweet flavour profile of this apple, growers expect SnapDragon to be a hit with Moms who are looking for a healthy alternative to traditional junk foods. Marketing efforts will include point-of-sale materials, high-graphic packaging, in-store demos, public relations and social media activities. Growers will also make in-store appearances and be available to visit with shoppers during select in-store demo events in November.”

To help educate consumers, a website was developed to highlight the benefits of SnapDragon and provide consumers with recipes and pairing suggestions at www.SnapDragonApple.com. The site also includes a Meet the Growers section that profiles a grower of the month and includes the full list of growers in New York State. Also included are links to Facebook and Twitter pages.

Formed in 2010, the New York Apple Growers is a grower-owned company united with the mission of introducing exclusive, premium flavor apple varieties to the marketplace. The organization is comprised of 145 grower members in the state of New York, representing about 60 per cent of the state’s apple production.

Developed by Cornell University, SnapDragon, as well as RubyFrost, is licensed for a managed release with the New York Apple Growers (NYAG) and RubyFrost will go to market in January 2015. Growers pay royalties on trees purchased, acreage planted and fruit produced, and the income is used to market the new apples and support Cornell’s apple-breeding program.

Both SnapDragon and RubyFrost have been a decade in the making with the first trees planted in farmers’ orchards in 2011. Now the still-young trees have produced a limited crop this year with plans for a much larger roll out in 2015-16.

“Retailers will appreciate SnapDragon because although the apple’s harvest window starts relatively early – in late September – its long storage and shelf life means they may be able to offer it with consistent quality for a longer time than Honeycrisp,” said Susan Brown, an apple breeder at Cornell’s New York State Agricultural Experiment Station in Geneva, New York.