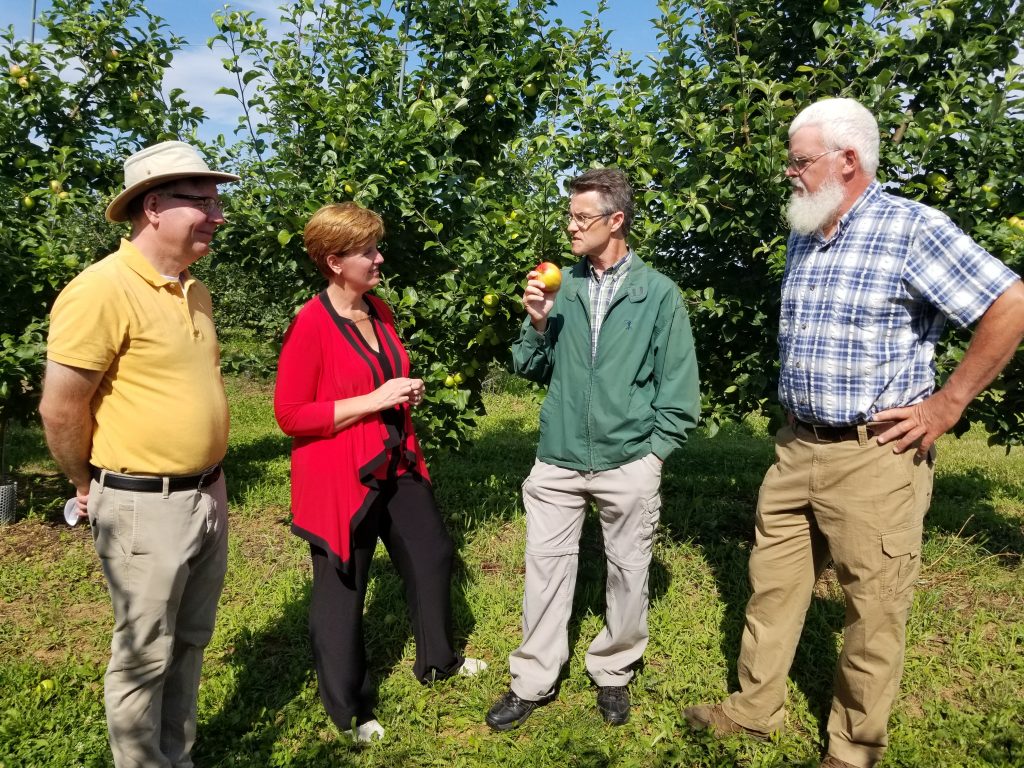 An investment of up to $384,490 is being made under the federal AgriScience Program. The Honourable Marie-Claude Bibeau, Minister of Agriculture and Agri-Food, was joined by Keith Colwell, the Nova Scotia Minister of Agriculture, at the Kentville Research and Development Centre to announce funding for the Nova Scotia Fruit Growers’ Association (NSFGA).

The NSFGA was established in 1863 and aims to promote Nova Scotia apples internationally and to collect information on new varieties, diseases, insects and other data to pass along to growers.

The funding will support the NSFGA to research and develop new environmentally sustainable tools and production methods to control fungal disease and insect pests in apples, while extending harvest time and retaining post-harvest quality. Through these efforts, the NSFGA aims to reduce losses from fungal disease, apple maggot and post-harvest disorders.

“There is a great deal of optimism in the Nova Scotia Tree Fruit industry. This is due, in no small part, to the introduction of new varieties and new technology which would not have been possible without the support of research projects such as this. This funding will help us fine tune the technology necessary to keep us competitive in the world tree fruit industry,” said Larry Lutz, president of the NSFGA.

Additional support of $167,526 is being provided through the Pan-Atlantic Agriculture Project Partnership Initiative (PAPPI) which includes funding from the federal government and the provinces of Nova Scotia, New Brunswick and Prince Edward Island.

PAPPI was established by the four Atlantic provinces to encourage Atlantic Canadian collaboration for eligible projects under their cost-shared Canadian Agricultural Partnership (CAP) agreements. Projects considered under PAPPI have mutual benefit in the region, leading to improved profitability, competitiveness and/or sustainability of the agriculture and agri-food industry in Atlantic Canada.

The Canadian Agricultural Partnership is a five-year, $3 billion investment by federal, provincial and territorial governments to strengthen the agriculture and agri-food sector. The Partnership includes programs and activities to enhance the competitiveness of the sector through research, science and innovation.

In 2017, the farm gate value for apples in the Maritimes reached $24.7 million, an increase of $9.2 million from 2011 due to the success of high value cultivars such as Honeycrisp and Ambrosia apples.

“Nova Scotia is Canada’s fourth largest producer of apples, and we want to improve how the fruit is produced and stored. The support we’re providing is an investment in research that will help producers find ways to continue to improve the quality of higher value varieties of apples, such as Honeycrisp, Ambrosia and Gala,” said Minister Colwell.