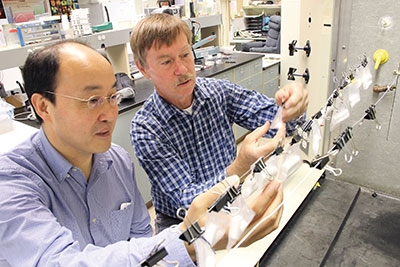 A blend of odours that attracts spotted wing drosophila (SWD) flies has been developed into a new lure product for improved monitoring and control of these tree-fruit and berry pests.

Based on those findings, Trécé, Inc., of Adair, Oklahoma, has commercially formulated the compounds into a novel blend and controlled-release lure, which is marketed under the trademark Pherocon SWD, along with a related trap.

“We developed the attractant because farmers and pest managers need improved methods of attracting, monitoring, and managing the fly to prevent severe potential losses of cherries, berries, grapes, and other fruit crops,” says Landolt, who leads the ARS Fruit and Vegetable Insect Research Unit in Wapato, Washington. “The lure’s availability should provide better information to growers who use trap-catch data to make pest-management decisions.” Those decisions include where, when, or whether to spray.

Known scientifically as Drosophila suzukii, SWD is a nonnative species from eastern Asia that was first detected in the United States in 2008. Since then, it has become an established pest of numerous tree-fruit and berry crops in both the eastern and western United States, says Landolt.

If unchecked, female SWD flies deposit their eggs beneath the surface of host fruit. Subsequent larval feeding inside the fruit causes it to soften, bruise, and wrinkle, ruining its marketability.

Capturing drosophila flies with lures containing wine and vinegar isn’t a new approach. But Landolt’s team was first to conduct a top-down examination of which chemical constituents in the aromas of these liquids specifically attract the flies.

Initially, acetic acid in vinegar and ethanol in wine were thought to be the primary attractants. Though important, the two compounds weren’t the only sources of attraction for SWD flies, the researchers found. In extensive testing, they showed that ethanol alone was less attractive than wine, and acetic acid alone was less attractive than vinegar. Similarly, combinations of ethanol and acetic acid were also less attractive to the flies than wine-plus-vinegar blends, which suggested that other constituents were at work. Indeed, in field tests, wine-plus-vinegar captured 10 times more flies than acetic acid-ethanol blends.

Interestingly, combining acetic acid and ethanol with the wine-plus-vinegar blend worked best of all.

In more recent studies, the team showed that SWD prefers certain types of wine and vinegar over others, with Merlot wine and rice vinegar attracting more male and female flies than Chardonnay wines and apple cider vinegar, for example.

Of 20 total Chardonnay and rice-vinegar chemicals the team evaluated, acetoin and methionol triggered the strongest responses in SWD when combined with acetic acid and ethanol.

A third chemical, ethyl lactate, also attracted the flies but was determined unnecessary for optimum attraction. It was ultimately dropped from the final lure formulation, which contains acetoin, methionol, acetic acid, and ethanol. “If one of those is missing, you get significantly lower attraction,” notes Dong Cha, an ARS postdoctoral researcher who, along with Landolt and coauthors, reported the findings in the February 2014 issue of Pest Management
Science.

Jan Suszkiw is a writer with the USDA’s Agricultural Research Service Information Staff.