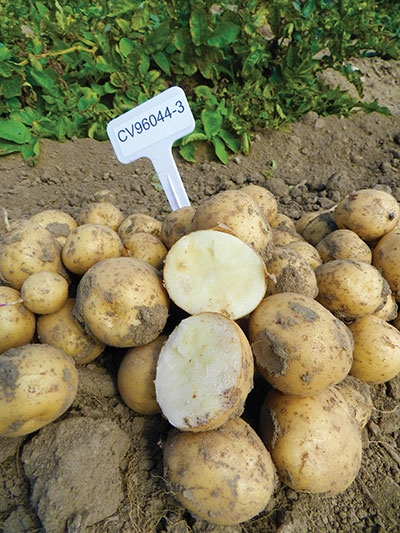 Variety CV96044-3 will be open for bidding in 2014 as part of AAFC’s Accelerated Release program to give growers an opportunity to further evaluate the variety in the field. Rosalie I. Tennison

Following the reverberations of the low carbohydrate diet craze, the potato industry has continued to tout the nutritional value of potatoes. As most growers know, potatoes are high in nutrition. But how does the industry convince consumers? In an effort to continue to meet the nutritional needs of consumers while giving them a “healthier” potato, breeders at Agriculture and Agri-Food Canada (AAFC) have developed a potato with a low glycemic index.

Variety CV96044-3 will be open for bidding in 2014 as part of AAFC’s Accelerated Release program to give growers an opportunity to further evaluate the variety in the field on an exclusive basis with the option to negotiate a commercialization license agreement. Developed by Dr. Benoit Bizimungu and his team at the Lethbridge Research Centre in Alberta in collaboration with Dr. David Holm, a colleague breeder at Colorado State University, the potato will fit well into a market looking for small, gourmet potatoes with a low glycemic index. It also will appeal to diabetics and those looking to lower their carbohydrate intake. Unfortunately, the identification of glycemic index and how that trait is perceived by consumers is confusing, but the arrival of this variety has marketing potential and perceived health benefits.

“This could be the future of the potato in North America,” says Terence Hochstein, executive director of the Potato Growers of Alberta (PGA). “We have to begin marketing by brand and this variety has some good potential for public consumption.”

He admits consumers will not likely see the variety in store bins for a number of years, but if growers see a benefit to growing the variety and consumers start asking when it will be available, the market potential is very positive.

The variety has uniform round tubers with white skin and cream flesh and features early maturity with high tuber set. The crop was grown in variety trials using standard production practices but the seed-pieces were placed closer together at planting and the crop was top-killed earlier than is normal. Once harvested, the potatoes were graded for marketable yield.

“This selection actually has a dual purpose potential,” Dr. Bizimungu explains. “It can be used for table market or chips processing. It was successfully evaluated for potential production of small potatoes under irrigation in Saskatchewan in 2009.”

Dr. Bizimungu says more work needs to be done to evaluate the variety under different growing environments, which is where the Accelerated Release program comes in. There also needs to be more work completed on best management practices to improve yield.

Hochstein says the PGA grew some of the variety in its test plots and it showed great potential.

“There is a possible niche market with this variety, but seed growers first have to see the benefit,” he comments.

Even though a low glycemic index potato variety will give growers more opportunities and consumers more choice, the industry still must work to educate the public about the nutritional value of potatoes. In particular, more education needs to be done to explain the confusing nature of basing one’s dietary requirements on glycemic index alone as the glycemic index of potatoes is different, depending on whether they are eaten hot or cold. Internationally, there is a growing consensus among scientists that glycemic index information should be included on food labels and in dietary guidelines. It may not be enough to give consumers what they want; it may also be necessary to keep telling them what they need to understand.