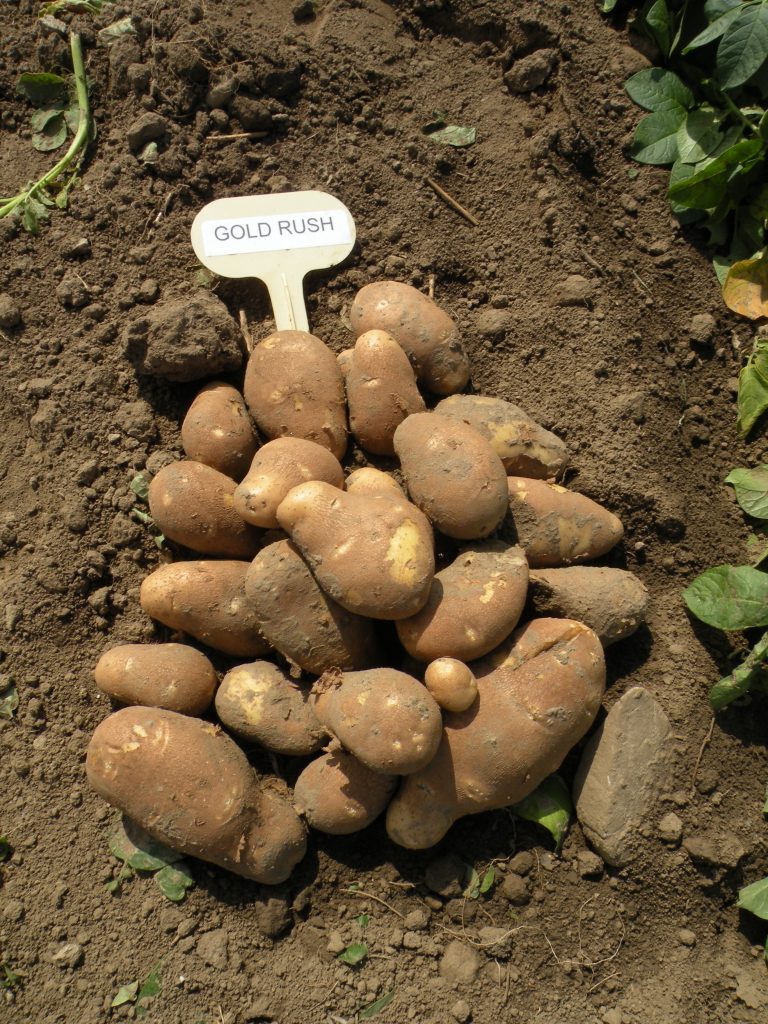 One of the russet varieties tested during the B.C. potato variety trials in 2012 was Gold Rush. Margaret Land

Almost 10 years ago, B.C. began hosting its own provincial potato variety trials. Since then, the program has grown by leaps and bounds, both in size and success.

“I went back and looked at some of the data from the first trial to now to see which varieties we had in the trial – previously not grown in the area – that are now being grown,” said Heather Meberg, a consultant with ES Cropconsult Ltd., the private firm that manages the trial on behalf of the province’s potato growers. “There’s several varieties – like Agata, Imola, Satina – that weren’t grown here traditionally that are now starting to gain momentum. That’s through access to the potato variety trial.”

The first potato variety trial was planted in B.C. in 2004. The objective of the program is to gather agronomic information about various potato varieties and how they grow under B.C. on-farm conditions. The varieties that show promise are then put through an on-farm storage trial and studied further in test kitchens.

“Essentially we’re looking for new potato varieties that will work in the B.C. marketplace and our growing conditions,” explained Meberg during the 2013 Lower Mainland Horticulture Improvement Association’s (LMHIA) Grower Short Course held recently in Abbotsford, B.C. “We’re looking for varieties that grow well here and can be sold here. We’re also starting to partner with industry to pursue numbered varieties so that all the weight’s not on one grower. We’re working with marketing agencies, buyers and growers to try to make this happen so we can find a new variety that B.C. can call their own.”

The variety trial is a very labour intensive project. ES Cropconsult workers hand plant each of the plots and replicate the 40 main varieties with 20 potatoes per plot. What makes the B.C. trial unique is the tubers are planted in a grower’s field so researchers and growers receive real information under real growing conditions.

“Because the varieties are hand planted, they aren’t treated with any seed treatments before planting,” explained Meberg.

“They are going into a commercial field but they don’t necessarily have that commercial seed treatment.”

The 2012 variety trials were hosted at Rod Swenson’s farm in the Delta, B.C., area. Here the trial was fertilized with 1,100 pounds of 8-18-22 and was irrigated twice. ES Cropconsult workers monitored the crop weekly during the season and provided spray recommendations to the grower who sprayed the research plots along with his own.

About 90 days after planting, typically in late August, ES Cropconsult holds a field demonstration day to provide interested growers an opportunity to see how the new potato varieties are performing.

“When we started doing it the first year, there were about 20 people [attending the field day],” recalled Meberg. “In the last couple of years, there has been well over 130 [attendees]. It’s become a great event.”

Growers from throughout B.C., Washington and Alberta have been known to attend. There have also been attendees from Ontario and P.E.I.

The morning of the event, 10 hills from each test plot are hand dug, displayed out and labeled. As growers arrive, they are provided with a form and are asked to go through the plots and make comments on all of the varieties. The forms are then gathered and the information summarized for each of the varieties.

“I take that and share it with Agriculture and Agri-Food Canada’s breeding programs,” said Meberg. “They take the comments that we make and that will impact the varieties they will focus on.”

Three red varieties were compared against the industry standard, Chieftain. While none could outperform Chieftain in yield, Meberg stressed: “Yield isn’t everything. We also look at uniformity of size and shape. We also look at how it might perform from a culinary perspective – is the skin flaky, is it buff, is the flesh too creamy.”

In the white varieties, both Imola and Columba yielded well as they have done in the previous few years. According to Meberg, Imola – after four years of data – has consistently produced more than 22 ton to the acre.

“Keep in mind with my yield per acre, we pick up every potato and it’s not necessarily graded out if there’s a cut in one,” she added.

In the yellow varieties, quite a few performed better than the industry standard of Yukon Gold.

“Alaska Bloom performed the best out of all of the potatoes in terms of great uniformity in size and shape,” said Meberg.

“It does have a blush on the eye like a Yukon Gold; quite a bit more blush but not offensively so.”

For the russets, the industry standard – Russet Norkotah – performed at the bottom end of the varieties, said Meberg.

The rest of the varieties trailed – Premiere, Pacific, Gold Rush and Alta Crown – didn’t perform well from a yield perspective but had good size uniformity and good shape uniformity.

“They looked really nice,” said Meberg, adding that while Innovator didn’t stand out among the russets, it did show some resistance to late blight.

“It is something we should work toward, especially with the late blight pressure we have in the Fraser Valley,” she said.

In the chipping varieties, Focus and Fontane were compared with the industry standard, Kennebec. Both Focus and Fontane have a yellower flesh than Kennebec, which may have implications in the market place, said Meberg.

“This year, Focus yielded quite a bit better than the Kennebec – a couple ton per acre – but in the cooking trials in the past, Fontane and Focus didn’t quite keep up to Kennebec in terms of cooking quality,” she said.

In the specialty varieties, B.C. tested one purple skin variety with a white flesh, which a lot of people commented on during the field day, said Meberg. Big Rosa and Mozart, which have pinkish skin with a yellow flesh, were also grown in the specialty variety trials. “They are something that would compare against a Klondike Rose,” said Meberg. “Mozart has performed well in several of the years of the trials.”

She hopes to expand the B.C. variety trials in the future, particularly in the area of cook testing. Currently, the cooking trials involve four teachers – two from Delta and two from Maple Ridge – plus a representative from Ag in the Classroom.

They each take the selected varieties into their kitchens and assess them from a sensory capacity.

She has put a proposal in to the potato cluster of the Canadian Horticultural Council to help fund the B.C. potato variety trial over five years.

“With that, we’ll be able to ramp up the cooking portion of the trial so we’re taking them not only to the test kitchens in the schools but taking them to big buyers so they can test them,” said Meberg.

She hopes to have an answer to her proposal by April.