Features Production Vegetables
Searching for what makes a tasty tomato 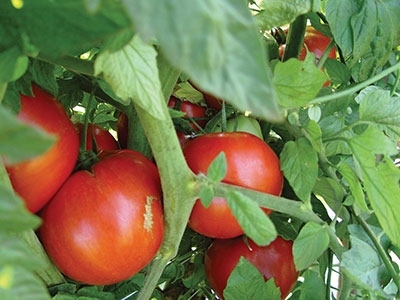 One of numerous varieties of tomatoes grown and analyzed for compounds that play a role in determining flavour. USDA-ARS

Tomatoes are a $2 billion crop in the United States, but a common complaint is that the varieties in supermarkets often lack the flavour of locally grown varieties. To improve flavour, breeders need to know more about the types of tomatoes that hold the greatest potential for enhancing taste.

The team raised 173 varieties on test plots in North Carolina, trained 10 volunteers in sensory analysis, and asked them to rate the varieties on a scale of one to five in four sensory areas: odor, taste, flavour, and texture. The varieties were selected from the approximately 6,000 accessions in the ARS Tomato Germplasm Collection in Geneva because they represent a cross-section of the world’s tomato diversity.

The results, published in Plant Genetic Resources: Characterization and Utilization (2013), represent one of the most comprehensive efforts to date for identifying sources for boosting flavour among commercial varieties and lines used for breeding. They also are a treasure trove for breeders, offering a comprehensive set of rankings on flavour qualities, sweetness, vitamin C content, sugar and acid content, and other characteristics.

The findings show that although thousands of compounds go into determining flavour and other characteristics, two components play a key role: the amounts of sugar and acid. There also was a positive correlation between sweetness and flavour.

The findings are good news for breeders because they show a lot of variation and a broad range of possibilities for adjusting sugar levels and developing more flavourful tomatoes.