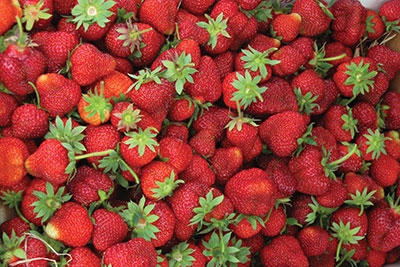 A team of researchers based at Ludwig-Maximilians-Universitaet (LMU) in Munich, Germany, and the Technical University of Munich (TUM) has shown how temporal control of a single gene solves two problems during fruit ripening in strawberries.

Not only human consumers find the rich, red colour of ripe strawberries attractive. In wild strawberries, it also serves to lure the animals the plant then exploits to spread its seeds. When birds and small mammals feed on the fruit, they subsequently excrete the indigestible seeds elsewhere, thus ensuring the dispersal of the species. However, as long as the fruit is in the growth phase and not yet mature, drawing attention to itself would be counterproductive. Moreover, the developing fruit also has to contend with the attentions of pathogens and pests.

Dr. Thilo Fischer, Privatdozent at the Chair of Plant Biochemistry and Physiology at LMU, and Dr. Wilfried Schwab of the Center for Life and Food Sciences Weihenstephan at the Technische Universität München (TUM), took a closer look at how the shift between repulsion and attraction is accomplished. Their findings, which are reported in the journal New Phytologist, elucidate the role played by the enzyme anthocyanidin reductase (ANR) in the switching process.

Botanically speaking, strawberries are neither berries nor fruits. The fleshy part of the fruit is actually a modification of the shoot tip from which the flowers develop. The yellow achenes embedded in its surface are the true fruits, each consisting of a single seed and a hard outer coat. During the growth phase of the fruit, the enzyme anthocyanidin reductase contributes to the synthesis of metabolites called proanthocyanidins in the green fruits. These compounds help to protect the developing fruit against predators, pathogens and abiotic stresses. When the seeds are ripe, the ANR gene is turned off. This makes precursors of proanthocyanidins available for use in the production of anthocyanins, the red pigments that give the mature fruit its alluring colour.

In their study, Dr. Fischer and Dr. Schwab, in co-operation with the Julius Kühn Institute in Pillnitz near Dresden, specifically inactivated the ANR function in growing fruits. This intervention led to the appearance of red stigmas in the flowers, and the production of anthocyanins in immature fruits.

“This finding indicates that the ANR function and the synthesis of protective compounds are also important in the stigmas of the flower,” says Dr. Fischer.

“With the aid of this model, it will be possible to carry out more detailed analyses of the functions of proanthocyanidins,” says Dr. Schwab.

This is also of interest to strawberry breeders, because the timing of the switch between warding off pests and the initiation of pigmentation not only controls the quality of the fruit but also determines the level of pesticide use.