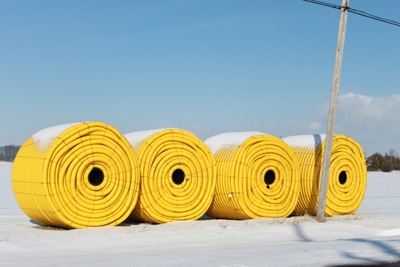 An example of polyethylene corrugated drainage pipe. Potato producers are learning that proper drainage and water management in their fields can save money. Dwight Burdette

Last season in Manitoba began with a very wet spring but Stan Wiebe, a potato grower from near McGregor, Man., reported that the areas of his fields where a tile drainage system has been installed did very well.

“Our average yield increase in those areas was 15 to 20 per cent,” said Wiebe during a presentation to fellow potato growers attending the 2012 Manitoba Potato Production Days conference and trade show at Brandon’s Keystone Centre.

Wiebe was one of several speakers addressing the issues of drainage at the conference. Prior to Wiebe’s presentation, R. Sri Ranjan, a professor in the department of engineering biosystems at the University of Manitoba, spoke of the need to manage drainage for the benefit of soil quality, crop production, water quality and efficacy.

“Growers need to know the options and solutions have to be customized,” he noted.

Sri Ranjan described studies that are underway at Wayne Derksen’s Hespler Farm near Winkler, in southwestern Manitoba.  The study, which was started in September 2009, is a partnership involving the University of Manitoba, Manitoba Agriculture, Food and Rural Initiatives (MAFRI) and industry partners.

“Proper drainage and water management can save a lot of money,” said Sri Ranjan. “The main problems for the potato industry are either too much moisture or lack of moisture.”

“One of the reasons that we wanted to participate in this project is because I wanted to see if we could extend the spacing in our fields to 70 to 80 feet,” said Derksen who plants about 1,600 acres of potatoes. “The standard spacing is 50 feet but no one can tell me why. We have a lot of small fields in our area. I was hoping to get some good information about the efficiency of a travel gun considering it is labour intensive.”

“We installed a number of groundwater monitoring systems which record automatic measurements every five minutes to measure how much water is coming out of each plot,” Sri Ranjan said. “Our target is to bring the water up to two feet below ground surface.

Derksen added that a side benefit of the experimentation was that salinity levels were much reduced in the sub-soil irrigated plots.

“Salinity is a major issue for us,” he said.

Sri Ranjan noted that, since 2010 was a very wet year, there was no need for irrigation. This past season, he reported, the best results were from drainage measures combined with irrigation.

Derksen reported that because last summer was so dry, he had to double the amount of water that was needed to keep the water levels at two feet below ground surface. “A lot of water drained away,” he said.

“How you manage water is critical,” he said. “With controlled drainage, there is hardly any outflow. Controlled drainage reduces the export of water and nutrients. We need better methods of capturing outflow.”

Wiebe reported that he is installing tile drainage on his land at the rate of about 400 acres a year. “We have six more quarters that we consider dry,” he said. “We are still assessing the results to determine if the investment is worth it.