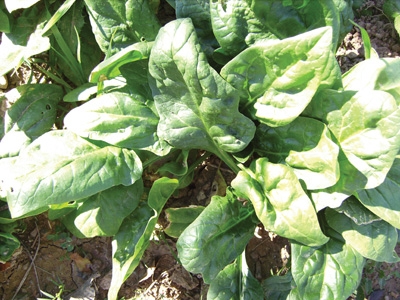 Research at Texas A&M University determined the sensitivity of poliovirus and rotavirus to electron-beam irradiation on fresh greens, such as spinach, and quantified the reduction in health risk of the spinach at different contamination levels and electron-beam doses.

A team of scientists studying the effects of electron-beam irradiation on iceberg lettuce and spinach has had its research published in the February issue of the leading microbiology journal, Applied and Environmental Microbiology, said the study’s lead investigator.

The study quantified the theoretical health-risk reduction from virus-related foodborne illness through the use of electron-beam irradiation.

“The purpose of this study was twofold,” said Dr. Suresh Pillai, director for the National Center for Electron Beam Research at Texas A&M University in College Station. “First, we wanted to determine poliovirus and rotavirus sensitivity to electron-beam irradiation on fresh-cut lettuce and spinach. Secondly, we wanted to quantify the theoretical reduction in health risk of lettuce and spinach at different contamination levels and electron-beam doses.”

Dr. Pillai said the study is important due to growing concern over viral infections transmitted through fresh produce, health-care costs associated with foodborne viruses and the dearth of quantified data on health-risk reduction through the use of electron-beam irradiation.

“Viruses are the number 1 cause of all foodborne illnesses,” he said.

Dr. Pillai said this was a collaborative study involving the centre, the Instituto de Ecologia at the Universidad Nacional Autonoma de Mexico, and the School of Public Health at the El Paso Regional Campus of the University of Texas Health Science Center at Houston.

The study, originally published online ahead of print in mid-December, cites the Produce Safety Project at Georgetown University estimate of current health-care costs associated with foodborne viruses at about $6 billion.

Dr. Pillai said that although norovirus is the leading cause of viral foodborne illnesses, all enteric viruses, including poliovirus and rotavirus, can cause foodborne infection that may lead to chronic disease complications.

“Fresh produce can be contaminated by enteric viruses through irrigation water containing fecal matter or by wash water that has become contaminated, plus the wild-type poliovirus is a health threat in many parts of the world,” he said.

He added that to date the U.S. Food and Drug Administration has approved the use of ionizing irradiation on fresh produce for use on only lettuce and spinach, so the research team studied only those specific leafy greens.

“We selected electron-beam processing as this is the technology that has the potential for worldwide use because it is based on electricity and is basically a switch-on, switch-off type technology,” Dr. Pillai said.

For their experiments, the team obtained iceberg lettuce and baby spinach samples from local grocery stores, then inoculated the samples with rotavirus and poliovirus and exposed the samples to defined electron-beam doses.

Dr. Pillai said results showed that electron-beam irradiation was able to inactivate both rotavirus and poliovirus on lettuce and spinach. The team’s quantitative health-risk estimates showed that even if a serving size of about 14 grams of lettuce contained 140 poliovirus particles, electron-beam irradiation at three kilograys (kGy) will reduce the risk of infection from greater than two in 10 persons, or 20 per cent, to approximately six in 100 persons, or six per cent. A kilogray is measurement unit of an absorbed ionizing radiation dose.

Similarly, according to study results, for a serving size of spinach contaminated with approximately 10 rotavirus particles, electron-beam irradiation at three kilograys will reduce infection risks from about three in 10 persons, or 30 per cent, to about five in 100 persons, or five per cent.

Dr. Pillai, however, noted that electron-beam irradiation is not meant to be used as a “stand-alone” or “clean-up” technology.

“The technology has to be used in conjunction with good agricultural practices in the field, along with good handling and processing practices in packing sheds, so the level of virus contamination on the product is kept as low as possible before electron-beam pasteurization,” he said.

Dr. Pillai said to his knowledge this study is the first to enumerate the reduction in health risks by using electron-beam irradiation on fresh produce.

“This study provides quantified data that electron-beam technology reduces the risk of viral foodborne illness in lettuce and spinach,” Dr. Pillai said. “But so far the fresh produce industry has not adopted this technology. It’s similar to auto manufacturers having a supply of seatbelts but not installing them in their vehicles.

“This research provides quantifiable proof of the risk-reduction benefits of electron-beam irradiation, and we hope it will lead to greater public demand for the use of this technology as part of good agricultural and post-harvest practices.”

He said electron-beam irradiation should only be used as a final step in a comprehensive food safety program, and that reducing infection risks will translate to savings in health-care costs and reduced human suffering.