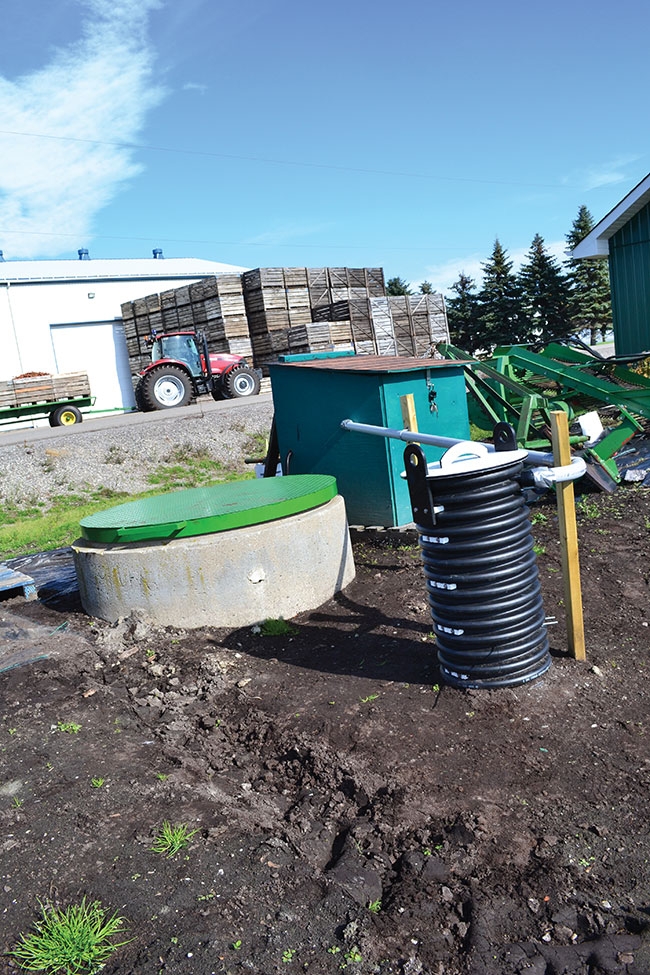 Popular across many U.S. states with both field crop and horticulture crop farmers, controlled drainage (CD) is making inroads in Ontario.

Now, a joint study on these innovative systems, being led by Agriculture and Agri-food Canada (AAFC) and McGill University researchers, is aiming to make Canadian horticulture crop growers and well as drainage contractors more familiar with the technology – and therefore more willing to adopt it and its benefits.

Put simply, controlled drainage delivers advantages for farmers and the environment that standard drainage cannot offer. Let’s take a look at how it works. Each controlled drain, placed just before the outlet, consists of a plastic tube 45 cm wide and almost two metres long, integrated with the existing drainage tile. Inside each tube are vertical plastic panels that can be pulled up to let the water flow freely or pushed downward to stop it. The system is meant to be left open in the spring and fall to help drain the field and closed during the summer to retain water from rainstorms (along with the valuable nutrients in that water). Most years, that should have a positive effect on crop yield. However, CD systems only work well on flat topography. With fields that aren’t flat, more controlled drain structures are required to control water flow and having structures located in the field itself (instead of just at the edge) make tasks such as planting and harvesting quite difficult.

The three-year McGill-AAFC study, currently underway in Ontario’s Holland Marsh area, aims to increase the adoption of CD by broadening its applicability.

“CD has primarily been examined in continuous and corn-soybean production systems because these systems generally cover the majority of acres across Eastern Canada,” explains AAFC Senior Water Management Engineer Andrew Jamieson. “While horticultural production covers fewer acres, it’s often located in areas that have good potential for the installation and success of CD – flat land and medium-to-coarse textured soils.”

Jamieson adds that since horticulture crops have higher nitrogen and phosphorus requirements than field crops, they present a greater opportunity for CD to decrease nutrient loss through runoff. It’s estimated that about 80 to 90 per cent of the phosphorous and nitrogen in a field crop field will stay put with controlled drainage compared to what would have been lost into the watershed with conventional drainage tile systems.

“There is also greater potential for profitability with CD use in the hort sector due to the higher value of the crops,” Jamieson notes. “Research has shown that the yield bump from CD systems doesn’t happen every year (for example, in wet years), so we need a better grasp on how often will a producer see the yield bump and how a grower can manage a CD system to optimize yields.”

The CD structures cost approximately $700 apiece plus installation, and when a farmer could expect to break even depends on yearly crop yields and prices, weather patterns, snow melt, soil type and so on.

Jamieson notes the overall goal of the study – which he is co-leading with McGill’s Dr. Chandra Madramootoo – is to address a number of adoption barriers that have been identified by both producers and tile drain contractors. This same goal also applies to a study of CD in field crops near Lucan, Ont., being spearheaded by AAFC and the Upper Thames River Conservation Authority.

“We have reams of research results confirming the environmental benefits of CD,” Jamieson says. “But what we hope to accomplish with these projects is a better understanding of how CD works at a farm level and the challenges of managing such a system from producer’s point of view.”

For example, producers need have best management practices on when the water table should be raised, or how long in a wet year the field be left to drain.

Tile drainage contractors have also asked AAFC for guidelines and standards for the installation of CD systems, and Jamieson hopes these studies can provide a foundation for that.

“The contractor is the first point of contact for producers regarding drainage on their farm and if we don’t resolve the contractors concerns with CD, then the adoption of CD will remain slow,” he explains.

One concern stems from the fact that CD systems are known to be more effective with newer tile drainage systems as they feature more pipes in the ground. More pipes with less space between them means a more uniform water table in the field can be achieved with the new drainage systems.

The study is taking place in organic soil as it has been identified by researchers as having good potential for CD. The controlled drains were installed during the fall of 2014 at two sites in the Holland Marsh. The first site is 0.62 hectares under organic carrot production. The second site is just more than four hectares being used for organic celery and onion production. A third site with conventional tile drains (organic onion production) will serve as the study control.

“The fields have been instrumented to sample tile runoff and measure tile flow all year round,” Jamieson says. “We’re using two different methods for that – in case one fails, and also to get a sense of which method costs less. During the growing season, the fields will also be equipped with water table and soil moisture monitoring. We should be able to get a good sense of how CD can be used to maintain a fairly constant water table depth.”

Jamieson notes that while some of the results will not be applicable to non-organic production, others definitely will. On the one hand, results on things like nutrient loading impact or ability of the system to maintain a consistent water table will be difficult to directly translate because organic (muck) soil is inherently different.

“However, there will be takeaways about the challenge of managing a CD system with a traditional irrigation system, which are applicable to many horticultural production systems.”

Study of controlled drains has been going on for more than two decades at the AAFC research station in Harrow, and has included an evaluation of the annual impact of CD on nutrient loading from tile and surface runoff on a plot scale, but Jamieson notes that CD research in Canada has generally had an overall focus on its function and effects only during the growing season. A look at the entire year is more valuable as it provides the entire picture, and that’s why Jamieson and his colleagues are taking on the challenge of monitoring over the winter months, attempting to study the annual impacts of CD on a field scale.

“Some recent research results out of Ohio where CD was used in fields after harvest until the spring time show a 40 to 70 per cent reduction in dissolved phosphorus loads,” Jamieson says. “We are looking forward to seeing what conclusions we can draw from our year-round study.”

The next step after this study is complete, says Jamieson, would be to examine the potential of CD and/or sub-irrigation (SI) on additional horticultural crops.

“As well, we should examine the benefits of retrofitting an existing tile system to CD or installing a new CD system for the purposes of reducing the need for irrigation,” he explains. “This would involve a cost-benefit analysis along with examining the differences in time management between CD and/or SI and traditional irrigation methods.”