Features Marketing Production
The future of wine in Nova Scotia 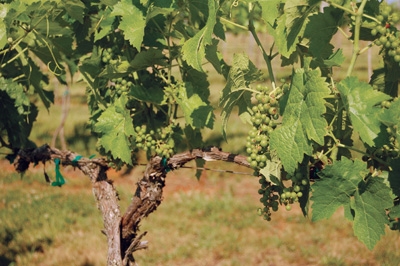 An example of Seyval Blanc, one of several varieties of wine grapes grown in Nova Scotia. Amy C Evans

For most of the past 30 years, Nova Scotia’s wine industry’s growth tempo could be described as leisurely. In 1981, there was just one winery, Grand Pre, located near Wolfville in the Annapolis Valley. By 1999, there were two more, Ste. Famille near Falmouth, also in the Valley, and Jost Vineyards at Malagash on the North Shore.

Then, in the first decade of the 21st century, the wine industry in Canada’s Ocean Playground sprang ahead.

“Only when the wine industry formed the winery association … did it stop flailing around,” said Hans Christian Jost of the Winery Association of Nova Scotia (WANS). “When dealing with government and politicians, they only want to hear from an industry that speaks with one voice.”

“We feel lucky,” said Jost. “It is an industry starting to build.”

The goal of the WANS is to have 1,000 acres in vines and 20 wineries in the province by 2020. According to Jost, there is considerable development potential on a 130-kilometre-long band of south-facing slope on the Annapolis Valley’s North Mountain that could grow enough grapes to produce “enough wine to flood eastern Canada.”

He recommends that Nova Scotia vineyards continue to focus on growing the varietals of Marechal Foch, Seyval Blanc, L’Acadie Blanc and Leon Millot that are well acclimated to Nova Scotia growing conditions.

Nova Scotia isn’t the best place to grow the vinifera varieties some people are familiar with, such as Chardonnay, Merlot and Cabernet Sauvignon. Jost recommends that N.S. growers not plant more than 25 per cent of their acreage to Chardonnay, Riesling or Pinot Noir, unless conditions are favourable.

“What we have to do is get people used to the ones we grow here,” he said. “We tell our growers to concentrate on those vines that are consistent producers every year.”

Jost believes that more grape growing research has to be done in the province. Both Acadia University in Wolfville, N.S., in the heart of Nova Scotia wine country, and the Nova Scotia Agricultural College in Truro, N.S., are working with the wine industry and Jost hopes this will continue in the future.

Although on an expansion track for the foreseeable future, the Nova Scotia wine industry is expected to remain a small, niche player. Nevertheless, Jost expresses optimism for the future of the domestic and provincial wine industries. Canadians, he observes, “are drinking more and more wine.”

As a result of growth in the Atlantic winery industry, the WANS is hosting the 2012 Atlantic Canada Wine Symposium (ACWS) from May 27 to 29, 2012. The event is being held at the Westin Nova Scotian Hotel in Halifax, N.S.

The symposium is the only Atlantic-focused wine conference specific to the needs, climate and interests of East Coast grape growers, winemakers, winery owners and wine enthusiasts.

“We have a small, but distinctive and viable wine industry here on the East Coast that has piqued the interest of international sommeliers, researchers and media,” said Janice Ruddock, managing director of the WANS. “This conference is an opportunity to get together, to share trends, discuss the wine industry and to learn from each
other…it’s a one-stop shop for networking and learning the latest in wine technology and grape growing.”

The 2012 symposium offers interactive educational workshops with three concurrent streams of learning – grape growing, winemaking and business applications for each of the sessions. Delegates will have the opportunity to network with other people invested in the Atlantic Canadian wine industry, high-profile speakers as well as national and international colleagues in the wine industry. They can choose from 35 sessions over the three-day event, including an intensive marketing workshop for wineries and pesticide certification courses for grape growers on Sunday, May 27.

The symposium will feature key industry speakers, a supplier marketplace and wine sampling from across the Atlantic provinces. Registration is currently open. To register or for more information about the symposium, visit www.atlanticwinesymposium.ca.