August 27, 2019By University of Rhode Island 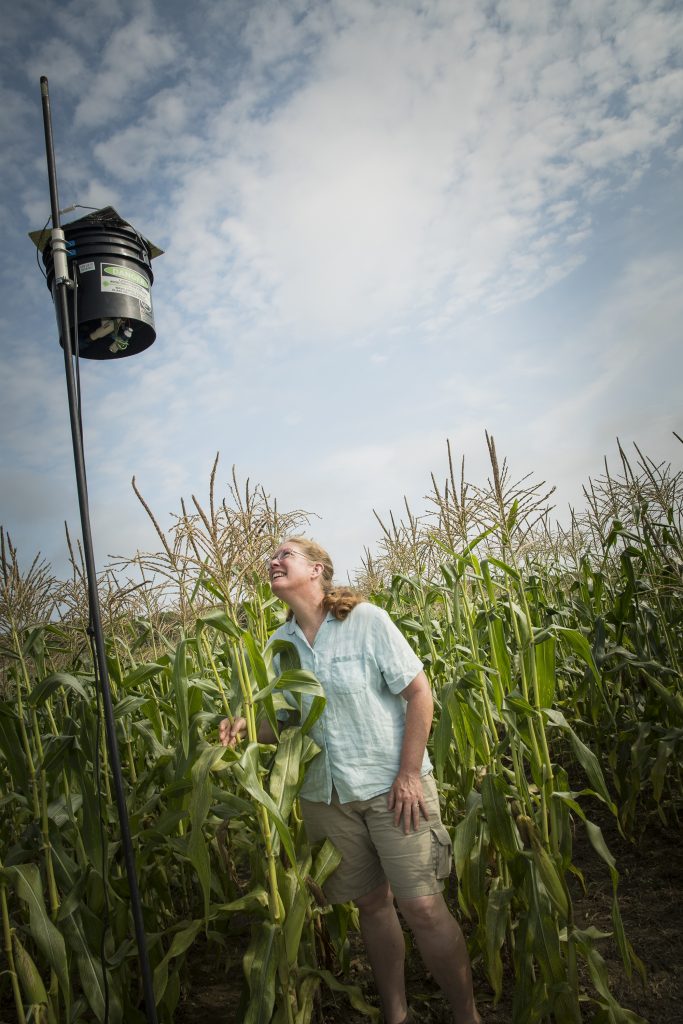 Farmers have had long-running battles trying to keep birds of many varieties from eating their sweetcorn. They’ve used propane cannons, visual deterrents and even shotguns, but none succeed for very long.

Now a University of Rhode Island researcher has created what she calls a laser scarecrow and tested it at numerous farm fields around the state. She found that the technology is highly successful at scaring birds from cornfields.

“Birds, especially starlings and red-winged blackbirds, are a major pest of sweet corn,” said Rebecca Brown, a URI professor of plant sciences. “They rip up the husks, peck at the kernels, and make the ears unmarketable. Despite all the approaches the farmers have used to keep the birds away, it’s not uncommon for them to lose as much as 75 per cent of their crop. And it all happens within about 48 hours of harvest.”

Although propane cannons are somewhat successful at scaring birds away, they are quite loud, which creates conflict between farmers and their neighbors.

“The laser scarecrow has the advantage that they’re relatively simple to set up, and the neighbors don’t even notice them because they’re completely silent and the beam isn’t visible to humans in the sunlight,” Brown said.

Lasers have been used for bird control for more than two decades, but mostly in indoor or partially enclosed settings like warehouses and sports stadiums. The commercial devices developed for those applications were not adapted for use in farm fields.

“In the past five years or so, several things came together to make the technology possible,” said Brown. “LED-based lasers have become much less expensive, they can now be run off batteries that are more powerful and less expensive, and solar panels are available to charge the batteries off the grid. We’ve been able to capitalize on all those developments.”

Brown’s laser scarecrow is housed in a five-gallon bucket to protect the electronic components from the elements, and it can be raised on a pole to the height of the corn tassels. The green laser light – which is the most effective color because birds are especially sensitive to green lighting – automatically moves back and forth across the tassels in a field as large as 600-feet across, scaring the birds away before they can reach the corn ears.

She has tested the device, as well as two commercially available lasers made for other bird control applications, for three years at the URI agricultural fields, as well as at commercial farms in Charlestown, Cranston, Exeter, Little Compton and Warwick. Her home-made device works best on flat fields, because the light doesn’t strike the right part of every corn stalk on rolling fields.

“We think the birds perceive the laser as a solid object they need to get away from, but we don’t know exactly. We can’t get inside the head of a bird,” Brown said. “But we know from tests done using hand-held lasers that if the laser isn’t constantly moving, the birds will eventually ignore it. It works especially well if there are other sources of food nearby that the birds can go to instead of eating the corn. We’re just trying to make the corn less desirable.”

Brown has sold several of her laser scarecrows for $500 to what she calls “early adopters,” farmers willing to try out the new technology before it has become commercialized. Her price is well below the $3,000 to $10,000 charged by existing manufacturers, whose devices aren’t intended for use in farm fields.

“The commercial growers who are trying it are mostly enthusiastic,” said Brown. “This has been a tough year, because bird pressure has been really heavy for some reason. So we didn’t get complete control of all the birds. But overall, no one has called me to say the laser was a waste of their $500. It’s probably going to turn out that it’s best deployed as part of a multi-tool approach to bird control, but it definitely seems to be reducing bird damage,” she added.

Once Brown can prove there is demand among corn growers for her laser scarecrow, she hopes to find a company interested in manufacturing and marketing the device beyond the local area.