Life in the Okanagan is a little bit quieter thanks to new technology from the Netherlands that deters birds from orchards and vineyards using lasers. 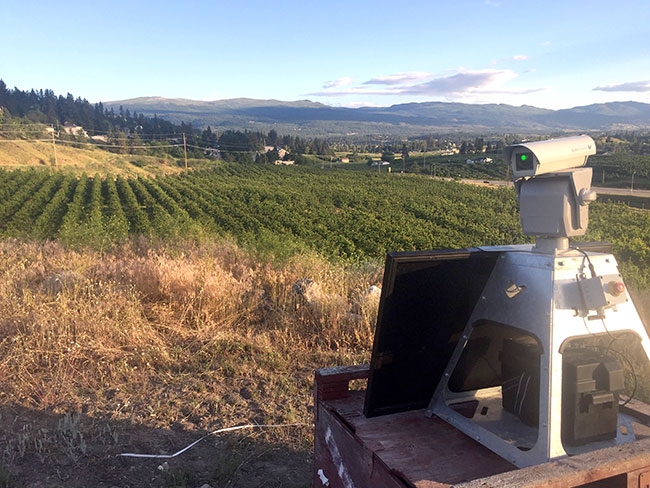 The device that emits the laser comes with a mount. This can be positioned on the ground, fruit bins or even a roof or other platform – anywhere that gives the laser enough elevation to sweep over the top of the orchard. Contributed photo

Protecting fruit crops from birds and other predators has never been easy. Scarecrows, reflective tape, netting, shotguns, propane-powered bangers and other audible bird scare devices, as well as traps and falcons, number among the most popular tools at growers’ disposal.

Now, growers can add lasers to the list after a successful trial of a Dutch system at Vernon cherry grower Coral Beach Farms Ltd.

Coral Beach has long used Bird-Gard’s noisemaker system and experimented with falconry in 2016, but horticulture manager Gayle Krahn says the Agrilaser Autonomic system from Bird Control Group BV in Delft, the Netherlands, has provided the most effective protection she’s seen against birds. It’s also been the least annoying tool for workers and neighbours.

Reducing conflicts with neighbours is a key concern for Coral Beach.

Residents of Coldstream, just east of Vernon, have been battling Coral Beach’s use of blowers, sprayers and helicopters, which the farm uses to keep its high-value cherries – many of which are destined for markets in Asia – dry and in top shape. But noise from the equipment prompted a complaint to B.C.’s Farm Industry Review Board, which handles such matters under the province’s Right-to-Farm legislation.

“The lasers, no one really notices them,” Krahn says. “It’s not an issue. It’s safe. We have it going when there’s pickers in the orchard and there’s never been a problem.”

Crows, magpies and robins are the key birds Coral Beach faces, as an area-wide trapping program has helped to significantly reduce starling numbers in the Okanagan Valley.

How it works
The idea behind the Autonomic system is simple: it shoots a green laser beam across the orchard and the birds instinctively avoid it. Programmed to follow the contours of the local topography, it effectively spreads a net of light across the property so that birds don’t enter. Any that get trapped below the beams find it difficult to escape, because they perceive the rays as a barrier.

“The crows in particular would sit outside of where the laser was running,” Krahn says.

It takes the Autonomic system about two minutes to cover the 88-acre property where it’s installed. It can be programmed to trace up to three different patterns in rotation, preventing the birds from knowing what’s coming next.

Krahn first investigated alternatives to its existing bird control tools in 2014. The lasers came to her attention, and in 2015 one was acquired on a trial basis. It was successful enough that Coral Beach purchased two more, and in 2016 boosted its complement to five. The cost is about US$9,500. Solar panels can be used to power the device.

Set-up is easy. While the initial set-up required 90 minutes, Krahn says subsequent adjustments take just 15 minutes. It requires a laptop – not included – which will load the patterns from the master set of 16.

The device that emits the laser comes with a mount. This can be positioned on the ground, fruit bins or even a roof or other platform – anywhere that gives the laser enough elevation to sweep over the top of the orchard.

The device that emits the laser comes with a mount. This can be positioned on the ground, fruit bins or even a roof or other platform – anywhere that gives the laser enough elevation to sweep over the top of the orchard.

Control effective
Krahn is pleased with the level of bird control the Autonomic system has delivered. Robins were present prior to Coral Beach adopting the lasers, but stay away when the lasers are in play.

Coral Beach continues to use Bird-Gard, and this has allowed Krahn to gauge the relative effectiveness of lasers versus electronic bird calls.

“Coral Beach has two farms that are about three kilometres away from each other,” she says. “One farm we used lasers, the other farm we used Bird-Gard, the audible noisemakers. And lasers won, hands-down. We had a fair bit of damage using Bird-Gard.”

While the particular sound card in the Bird-Gard system may have been a factor, the effectiveness of the lasers is unquestionable in Krahn’s mind.

It’s certainly more effective than scarecrows, something demonstrated in a 2016 research project the BC Blueberry Council funded in partnership with the province and local municipalities. Conducted by agrologist Oliver Busby, principal of EBB Environmental Consulting Inc. in Delta, B.C., the work found the most effective non-lethal bird control measures to be mylar tape, electric bird calls and propane cannons.

Okanagan growers, however, have only been able to see success with these less-intrusive methods of bird control, not to mention lasers, thanks largely to the well-established starling control program the BC Grape Growers Association initiated in 2003 to protect wine grapes.

The program sets up traps in strategic locations and captured birds are euthanized and donated to a local raptor rehabilitation program. With an annual budget of approximately $100,000 drawn from growers as well as local government, the program has managed to eliminate more than 800,000 starlings since inception.

“It was pretty devastating the damage that starlings did in the valley. The flocks were basically uncontrolled. You dealt with massive swarms,” he says. “It was like a war zone here, with scare guns, bird squawkers, shotguns.”

Today, the valley is quieter and growers get to keep more of their crop.

Double-up
The smaller flocks are no reason for reduced concern, however. While softer control measures are great, he says none of them would be viable without the area-wide control program that keeps starling populations in check.

“If people forget that, we’ll end up back where we were, and it will cost millions.”

Krahn agrees that lasers, while a socially acceptable alternative to propane cannons and trapping, aren’t sufficient in and of themselves.

While they’re easy to set up, safe to use, and low maintenance, she says walking the orchard perimeter with a pellet gun remains the most effective defence. Dead birds don’t steal fruit, after all.

“It’s not a silver bullet,” she says of the lasers. “Double-up on your bird control.”