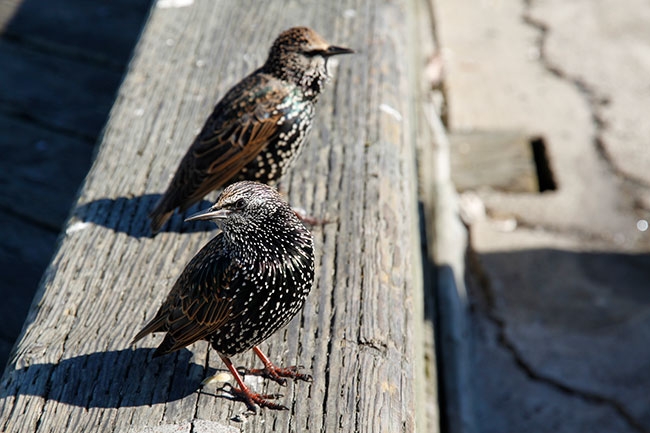 Starlings are unsavory interlopers for fruit producers as they not only spread disease but often destroy an entire fruit crop. Contributed photo

For fruit growers across the globe, birds are a common bane, particularly for those seeking a quiet, humane and cost-effective mitigation strategy. Starlings are especially unsavory interlopers as they not only spread disease but often destroy an entire crop, forcing growers to walk away and leave everything on the tree.

Fortunately for B.C. growers, Coral Beach Farms decided that a new solution was needed – or at least new to B.C. With funding from the Canada-B.C. Agri-Innovation Program, delivered through Investment Agriculture Foundation’s (IAF) Agri-Food Environment Initiative, Coral Beach became the first grower in the province to test the Agrilaser Autonomic Program at its Lake Country orchard.

Recently launched in the Netherlands, the Agrilaser has been successfully used in European orchards and offers a host of benefits, according to Gayle Krahn, Coral Beach hort manager.

“The Agrilaser is clean, silent and safe for humans, birds and the environment,” explains Krahn, who ran the two-year trial that investigated bird activity and damage in both laser-treated and non-laser treated orchards.

While livestock such as cows, pigs and chickens will ignore the laser beam, birds view it as a physical danger and keep their distance.

Configured through remote control and offering a maximum range of 2,000 metres, users can install and control settings from their laptops and are able to define up to ten different areas in which birds are repelled. Coral Beach programmed their laser to sweep just above the trees and only operate during specific times of the day. In less than a minute, the laser covered the 135-acre orchard and led to a dramatic shift in their bird population.

Over time, however, they discovered that while the lasers proved a consistent deterrent on certain species such as starlings and sparrows, crows and magpies eventually became resistant as they adapted to the laser’s pattern. A potential solution is to change the laser’s pattern every two weeks in hopes of continuously confusing the birds and keeping them repelled. Users also have the option to set the laser to change patterns partway through the day to cause even more confusion.

During the trial, Coral Beach also compared the laser to more conventional bird control methods like falconry and noisemakers.

“Noisemakers are exactly that – they make noise and as a result bother neighbors and the surrounding community,” laments Krahn, adding that birds also tend to get used to the noise and eventually ignore it.

While falconry may work for smaller farmers, the higher number of falconers needed for a larger operation is too costly for most.

For now Coral Beach continues to experiment with broader-based monitoring and programming, adding more Agrilaser units to its other orchards and sharing information with growers (many of whom are reluctant to invest in technology until it has been tested locally).

“We want to make sure we share a solution that will benefit all tree fruit, grape and berry growers,” Krahn says. “I have confidence in the lasers and I think by tweaking the program we can have even greater success.”