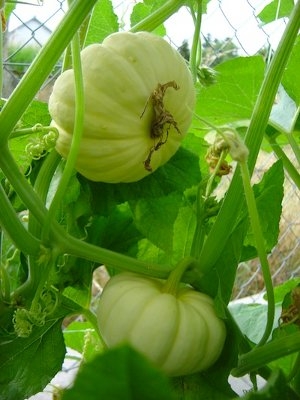 Indian kaddu is also known as a vegetable marrow or a variety of squash. It is a warm season crop that is relatively easy to grow with most varieties maturing 85 to 95 after planting.

Not a lot of information is known about this crop, although, according to Ahmed Bilal, a research associate with the Vineland Research and Innovation Centre (VRIC), research trials in 2009 showed the crop could easily be produced under southern Ontario growing conditions. During the research trials, the kaddu seed was started in the greenhouse with the seedlings transplanted to the field at a density rate of 250 plants per acre.

As a summer-type squash, kaddu skin can bruise quite easily and care needs to be taken during post-harvest handling, according to Bilal.

This crop is very similar to the orange carrots currently produced in Canada but is bright red in colour. This is caused by increased amounts of lycopene, which is also found in tomatoes and watermelons. Lycopene is associated with the reduced risk of macular degeneration, serum lipid oxidation, and helps to prevent heart disease and a wide variety of cancers, including prostate cancer. It also helps maintain healthy skin.

Indian red carrot is very popular among South Asians and can be used raw, cooked in soups and stews, shaved, pickled and pressed into juice, just like orange carrots.

This crop is currently being trialed by the Vineland Research and Innovation Centre. It’s a cool-season crop that can grow well when direct-seeded into muck or sandy loam soil that is well drained. It usually matures 70 to 85 days after planting.

VRIC research associate Ahmed Bilal said he first became interested in trying the crop in Ontario after seeing Indian red carrot advertised for $3.99 per pound in a Brampton area grocery store. “On the same rack, beside these carrots, they had local carrots for 10 pounds for $1.99,” he said.
Seed source is important. Bilal sourced the seed for his trial from Pakistan and India.