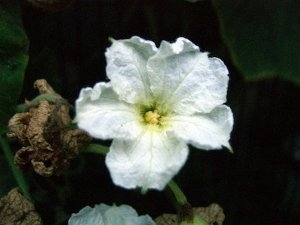 Bottle gourd is also known as calabash, opo squash, and long melon. It is another vine crop grown for its fruit, which can be harvested young as a vegetable or allowed to mature, dry and be used as a utensil or musical instrument.

It is a tropical/subtropical plant typically grown in China, South Asia and Africa. The fresh fruit is light green with a smooth skin and is white inside. Bottle gourd comes in a number of shapes and sizes and can be large, small, round or long. 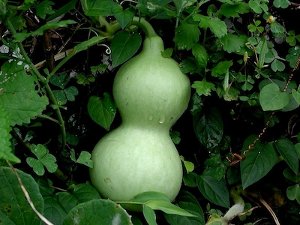 As a vegetable, bottle gourd is used in stir-fries or soups in China, dried and marinated in strips for sushi in Japan, or cooked as a summer squash. In some areas, the seeds are toasted, ground and mixed with other ingredients to make a drink. The shoots, tendrils and leaves can also be eaten as greens.

But partakers should beware. Bottle gourds contains cucurbitacins, which can be toxic. This toxin is responsible for the bitter taste found in members of the cucumber family. It can cause ulcers and has been reported to kill people who have consumed calabash juice.

This crop is currently being field trialed by the Vineland Research and Innovation Centre. While similar to Indian kaddu, which can have a thin skin, bottle gourd skin is tougher. “But it has pretty much the same texture and taste as Indian kaddu,” said Ahmed Bilal, a research associate with VRIC. “So we thought we would test this variety.”