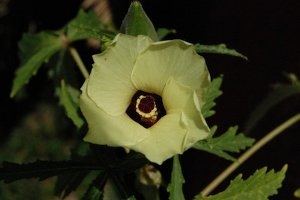 The plant originated in Africa and can be grown in tropical, subtropical and warm temperate regions. It is considered one of the most heat and drought-tolerant crops in the world but can be damaged by severe frost.

Okra is valued for its edible green seedpods, which contain round, white seeds. It can grow quite tall, up to four to five feet, and produces a white to yellow flower, very similar to that of a hibiscus, with a red or purple spot at the base of each petal.

According to Joan Beck, farm manager of J. Collins and Sons farm, located in southwestern Ontario, okra is a very labour-intensive crop and must be picked every other day as the pods can rapidly become long and woody. It is best to pick the seedpods about a week after the flower has been pollinated.

Okra is usually planted from transplants but may be capable of being direct seeded in areas with longer growing periods. The seeds should be soaked overnight and planted to a depth of just under one inch. Germination occurs anywhere between six days and three weeks.

Okra is used in many cultures in many ways. When the seedpod is cooked, it produces a goo or slime that contains a usable form of soluble fibre. This can be used in thick stews or gumbo. In South Asia, okra is usually cut up and used in stir-fries. In the Caribbean, it is a key ingredient in callaloo, and in the U.S., it can be served breaded and deep-fried.

It is reported that okra leaves can also be eaten, cooked in a similar way to the greens of beets and dandelions. The seeds of the fruit can also be roasted and ground to make a coffee substitute (without the caffeine). The seeds can also be pressed to make okra oil, a greenish-yellow oil with an apparent pleasant taste and odour that is high in unsaturated fats.