Also known as aubergine, melongene, brinjal and guinea squash, there are basically two types of eggplant in demand as world crops: Chinese eggplant, which is long and banana-shaped, and Indian eggplant, which is small (about one to two inches across) and round.

A native of India, eggplant generally grows better in Canadian climates if it is planted as a transplant. The plants should be spaced 18 to 24 inches apart. Pests and diseases afflicting the crop are similar to those found on other nightshade crops, such as tomatoes and potatoes. The fruit is typically purple and has a fleshy, meaty texture.

In India, round eggplant is used in everyday cooking as a meat substitute and is also made into a paste to heal wounds and cuts. It is commonly found in curries and chutneys. In China, the largest producer of eggplant in the world, eggplant is braised, stewed, steamed or stuffed. 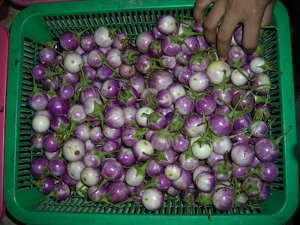