Features Production Profiles
From stock cars to the ‘royal’ family 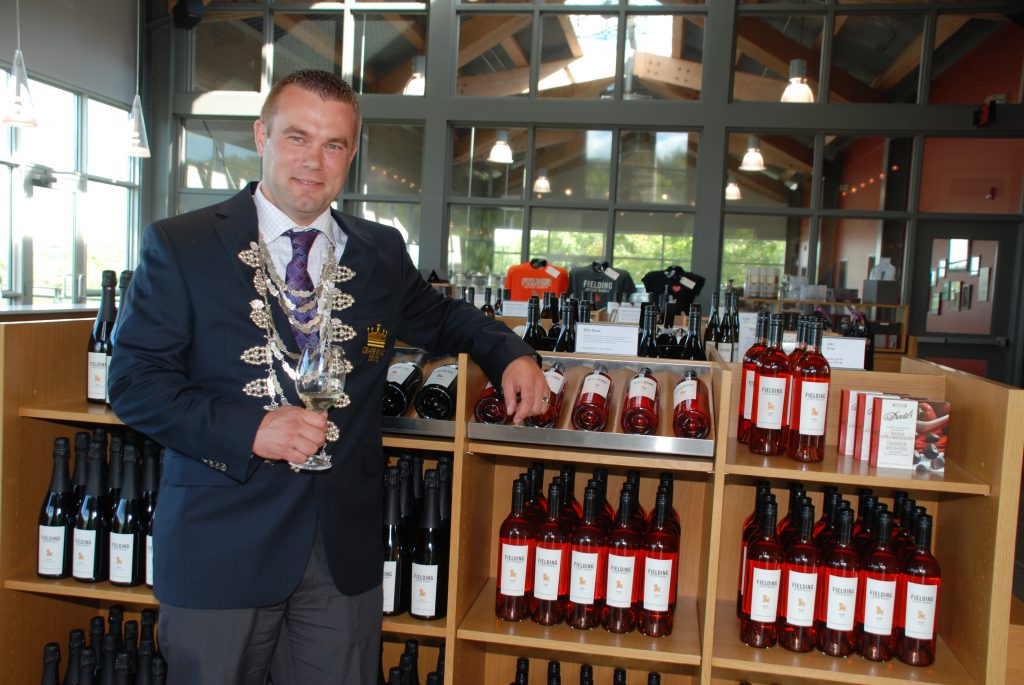 It was a full two months after being caught in the glare of the media spotlight at his coronation to kick off the Niagara Wine Festival. But he needn’t have feared any hardball questions as there’s only one that needed to be answered, and the one he’s always asked: “How did a boy who grew up among the rock outcroppings and pine trees of Ontario’s Haliburton cottage country find his way down to Niagara to become grape-growing royalty?” And this is followed up with a second question: “More to the point, how did he do both that and open a winery in just 12 years?”

That’s how long it’s taken Curtis, 34, to go from a novice grower to inclusion in the “royal” family of 53 previous grape kings (and three grape queens, also called grape kings) who have been ordained since 1956 when what has evolved to become the Niagara Wine Festival was just five years old.

Almost all members of this royal family were born into a grape-growing family. Not Curtis. He raced stock cars in the NASCAR Canadian Tire Series while working on a cash crop farm near Chatham, and still races his Mustang at the Mosport International Raceway east of Toronto.

“I always liked cars, I’m a big gear head,” he said. To that end he graduated from the automotive business marketing program at Georgian College in Barrie, Ont., and had set his cap on a career in car racing.

“There is money in it” he said.

He had been working in Ontario’s corn belt around Chatham at the same time his father was scouting for grape-growing property on which to build a winery. Ken Fielding was looking to reinvest money that he had made as the eastern and Northern Ontario (including Ottawa) regional development agent for Subway earning a fee for each new franchise that opened. He got in on the ground floor of the sandwich store chain some 25 years ago after reading about Subway in a trade publication. He gave up his Dixie Lee fried chicken franchise in Minden, in Ontario’s cottage country, to open a Subway franchise at a time when only a few had been opened in Toronto.

An eager field hand
Ken had his eye on a choice piece of property on the Beamsville Bench growing area on the slope of the Niagara Escarpment. When it came on the market, Curtis changed his agricultural career from large fields and big farm equipment to what would be considered in southwestern Ontario to be a very small 20 acres that was to become Fielding Estate Winery.

To do that he had to learn about growing grapes and making and marketing wine. To that end worked at a nearby winery on the Bench, first in the vineyard and on the crush pad and then in the winery itself. Over three years at Vineland Estates Winery he met a number of growers and found them to be like all farmers.

“They don’t BS you too much and they lay it on the line. You either get along or you don’t,” he said.

“Extremely hard working,” Vineland Estates Winery president Allan Schmidt said about his former field hand. “We were sorry to see him go,” he said, adding that Curtis is very practical and has a work ethic that has served him well as a grower, winery owner, and now a spokesperson for the grape and wine industry.

“He learned quickly,” former grape king (2007) Mattias Oppenlaender said to introduce the 2012 grape king at the coronation ceremony. Oppenlaender would know that more than anyone. Besides running his own vineyard, and managing a large corporate vineyard, Oppenlaender oversaw planting the Reisling and chardonnay vineyard at Fielding Estates Winery where the crowning took place. That production, and another 40 acres of grapes grown closer to Lake Ontario in a second vineyard, fills the current needs of the winery.

Oppenlaender, vice-chairman of the Grape Growers of Ontario, is one of the some 500 close-knit growers who market their grapes through the marketing board. Curtis said he’s learned a lot by reading the history of the marketing board, but is too busy running a winery and raising a young family to seek a position on the board at this time.

Winery is a ‘bit of Muskoka’
The Fielding Estate family winery comprises Ken, his wife Margaret, their son Curtis and his wife Heidi and their two young boys, Ty, 4, and Cole, 2. Curtis met Heidi, the daughter of a General Motors autoworker in St. Catharines, at a wine tasting. That cemented Curtis’s connection to Niagara.

The Fielding family still maintains a home in Minden, which is a lot closer to Algonquin Park (some 50 kilometres south) than to Niagara, which is another 225 kilometres south as the crow flies. To remind themselves of where they came from, the winery was deliberately located close to the rugged rock of the Niagara Escarpment and built with cedar, glass and stone. A welcoming granite fireplace in the tasting room completes the illusion of a northern lodge, while a picture of the iconic Muskoka chair on every bottle of wine identifies the winery in its market branding.

“A bit of Muskoka, but south of Toronto,” Curtis said about the geographic anomaly of transplanting a piece of Ontario’s cottage country to Niagara. On a clear day, the Toronto skyline can be seen to the north across Lake Ontario. The winery is one of a half dozen wineries nestled together on the western edge of the Beamsville Bench grape-growing region.

It had been a peach and pear orchard with some juice grapes. Quality vinifera grapes were planted in 2001 and the winery building was built four years later. From the first harvest – 25 barrels of Cabernet merlot reserve – the winery began winning a cavalcade of awards. Most recently, Fielding emerged the most decorated winery at the prestigious Cuvee Awards ceremony (a component of the Niagara Wine Festival) in January 2012. Fielding Estate Winery walked away with three top awards for its Estate Bottled Pinot Gris and Viognier white wines, and its Cabernet Franc red wine made from the 2010 harvest, which in quality was one of Ontario’s best-ever.

All things being equal, the trio of judges was impressed by the collaboration that Curtis has had with the CFIA (Canadian Food Inspection Agency) research project studying hot water treatment of vines, and with the ongoing cold hardiness program at the Cool Climate Oenology and Viticulture Institute (CCOVI) at Brock University in nearby St. Catharines. Often colder winter temperatures, and the lack of water for irrigation, are concerns for growing grapes on the extreme western end of the Beamsville Bench growing area.

Each year, Ontario’s grape growers nominate a handful of fellow growers for the title of grape king. Candidates are judged on their ability to grow high-risk grape varieties; their management of diseases, insects and weeds; their soil and grape canopy management; and the overall quality of their vineyards. There is a miscellaneous category that includes risk and management of cold and frost, an outreach category that includes collaboration with researchers and involvement in the industry, and an innovation category, which means being on the cutting edge of applying the latest in research and technology.