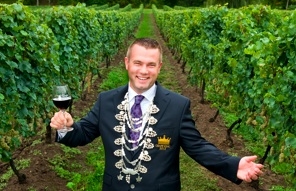 September 19, 2012, St. Catharines, Ont. — Farm Credit Canada, the Grape Growers of Ontario and the Niagara Grape and Wine Festival recently announced that Curtis Fielding of Fielding Estate Winery in Beamsville has been named the 2012 Grape King.

“We are so excited to have Curtis serve as the 2012 Grape King and be the ambassador for Ontario’s viticulture industry,” said Bill George, chair of the Grape Growers of Ontario. “Curtis is a young, dynamic figure who has quickly established himself as a leader in viticulture innovation and producing outstanding wines.”

It has been a good year for Fielding Estate Winery. The family-owned winery situated on the Beamsville Bench came away from the annual Cuvée Awards in March as the most decorated winery, winning three of the prestigious awards. Fielding was honoured with the most outstanding awards for its 2010 Estate Bottled Pinot Gris, 2010 Viognier and 2010 Cabernet Franc.

“This is a huge honour,” said Fielding, 34. “Look at some of the names who have been Grape King in the past. They are big names with world-class vineyards. They are people that our industry really respects and looks up to. It is amazing to have my name associated with them.”

The Grape King jacket is an honour recognizing viticulture excellence. The Grape Growers of Ontario have installed a Grape King each year since 1956, selecting the grape grower judged to have maintained the best vineyard in the province while being able to serve as a representative and ambassador for the industry.

“The annual crowning of the Grape King is recognition of the best that Ontario’s grape growers have to offer,” said Debbie Zimmerman, chief executive office of the Grape Growers of Ontario. “In a relatively short time, Curtis has established himself as an outstanding ambassador for Ontario’s grape growers, producing award-winning wines and experimenting with new varietals that add more layers to Ontario’s rapidly-growing grape and wine industry.”

“Curtis is an excellent example of the next generation of grape grower, a first-generation farmer who has quickly embraced sustainable practices while maintaining a beautiful vineyard and producing top quality wines,” said Kimberly Hundertmark, executive director of the Niagara Grape and Wine Festival.

While Curtis Fielding was once a competitive racecar driver on the Canadian circuit, he has become a natural grape grower as the general manager of Fielding Estate Winery. The Fielding family purchased a 20-acre peach and pear orchard on the Beamsville Bench in the early 2000s, replacing all the trees — and a few rows of juice grapes — with high-quality VQA vinifera vines in the summer of 2001. The Fielding Wine Lodge opened its doors in May 2005 and was named one of Canada’s Top 10 wineries by the Canadian Wine Awards in 2009.

The Fielding operation also includes a 40-acre farm in Beamsville, supplying all the grapes needed to fill the winery’s needs.

Coming out of Georgian College with a diploma in Automotive Business Marketing, and once done with competitive racing, Curtis spent three years learning the ins and outs of the grape and wine industry with winemakers in the Niagara area before embarking on his own winery adventure. At his winery, Curtis and his family have taken great care to be mindful of the environment, using as much natural light in the Wine Lodge as possible, utilizing a natural lagoon to treat wastewater and recycling all left over grape stems as mulch. Curtis is also starting the three-year process to have Fielding Estate Winery recognized as an organic winery. It was noted in the Grape King judging that Curtis’s vineyard is “pristine.”

Curtis lives in Beamsville with his wife Heidi and two young sons.