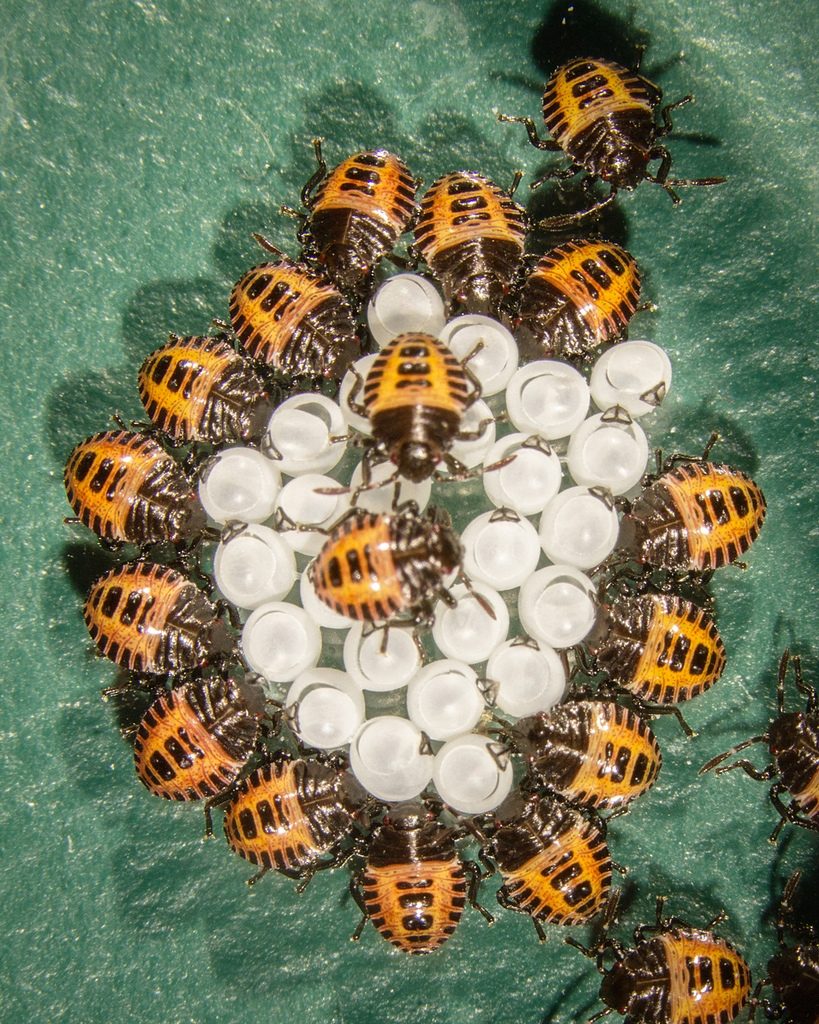 As the brown marmorated stink bug spreads across Oregon and the eastern United States, Oregon State University is studying how to use bug-on-bug warfare to stop this crop-damaging pest.

The insect arrived in the eastern United States in the late 1990s and has since spread to more than 30 states. The non-native bug was found in Portland in 2004 and has since shown up in 13 Oregon counties, including all of the Willamette Valley.

But populations in Oregon are still relatively low in most areas, according to OSU estimates. Although the pest has caused major commercial crop damage in many eastern states, so far it has had minimal impact on northwestern crops.

To keep it that way, OSU researchers are looking to a non-pesticide solution: a tiny wasp imported from China. Smaller than a pinhead, the wasp, known as Trissolcus halyomorphae, lays its eggs in the brown marmorated stink bug’s eggs. A video OSU made showing this process can be viewed at bit.ly/YbMuLh.

The potential release of the wasp in the field could still be years away as researchers need to first test its behaviour in quarantine to determine if it discriminates between the brown marmorated stink bug’s eggs and those of other species. Canada and Mexico must also agree to the wasp’s introduction.

“The problem with the introduction of biological control organisms is that bugs don’t recognize borders like we do – we don’t want to release something that causes more harm than good,” said entomologist Peter Shearer, who’s leading OSU’s stink bug research. “We want to do this right because rarely do we have an ample opportunity to deal with a problem that has the potential to be this bad.”

Oregon farmers fear the insect could severely affect crops if its numbers continue to swell. It has already been spotted near some large agricultural operations in Oregon. The bug isn’t a picky eater, having shown a taste for more than 100 types of crops, including corn, wine grapes, hazelnuts, pears, apples and sweet cherries.

It leaves behind discoloured patches on the food, which is still safe to eat, but the cosmetic blemishes make the products largely worthless in the marketplace.

“It’s more of a list of what it doesn’t eat than what it does feed on,” said Vaughn Walton, an entomologist at OSU.

“Identifying where the bug is found is an ongoing effort. Unfortunately, it has been detected in many of Oregon’s major agricultural areas and the populations are increasing. It looks like it could be a problem soon in some areas based on populations we found in 2012.”

OSU researchers are using this field data to plot an even more aggressive tracking strategy for 2013.

In the winter, the brown marmorated stink bug seeks shelter indoors, often in attics, garages and other dark, moist places. It can be confused with other insects, so the OSU Extension Service has published a two-page guide for the public on how to distinguish it from look-alikes at bit.ly/102dyIw. The document is also in Spanish at bit.ly/S9oHbB. More information on the bug is at bit.ly/Va0m7N.