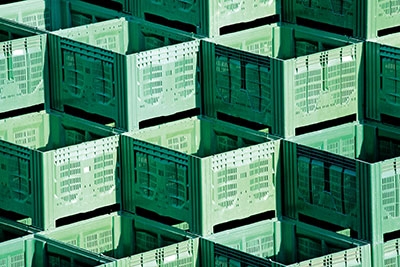 A new study indicates that Reusable Plastic Containers (RPCs) used to ship fruit and vegetables in Canada pose a risk for contamination.

A new study indicates that Reusable Plastic Containers (RPCs) used to ship fruit and vegetables in Canada pose a risk for contamination.

The report, developed by a University of Guelph researcher, calls the possibility for contamination a significant concern.

“The main outcome of the study is that the RPCs meant to be delivered in a sanitary condition were not effectively cleaned,” said Keith Warriner, food safety and quality assurance program director at the University of Guelph and author of the study. “From a food safety perspective, this could mean that pathogens such as salmonella, norovirus and cyclospora could be transferred to produce.

“In addition to human pathogens, it is also possible that plant pathogens such as Erwinia, Pseudomonas, Xanthomonas and Ascomycetes could be transferred, thereby resulting in premature spoilage of produce,” he added.

In Canada, some retailers demand farmers ship fruit and vegetables from the farm to the store using RPCs. The containers are rented by farmers to ship their produce and then returned to the United States for cleaning. In Ontario, for example, RPCs are shipped to Chicago for sanitization.

For Warriner’s study, farm locations in Ontario and Quebec were visited and at each location, 10 randomly selected RPCs were sampled.

A combination of ATP (adenosine triphosphate) swabs and microbiological analysis were the methods chosen to determine the sanitary status of the RPCs. ATP readings taken at farms provided an estimate of viable cells present on the surface of RPCs.

The standards set were those expected of a cleaned surface of a food contact surface within the food industry with a 20 per cent failure rate being deemed the upper limit of acceptability. Trays were sampled as delivered thereby ruling out contamination at the packing facility.

Containers at the Ontario and Quebec farms were tested for overall sanitary status (visual inspection and ATP testing), in addition to bacterial counts (total aerobic counts) that included potential fecal indicators (enterobacteriaceae and coliforms). Collectively, 64 per cent of all RPCs failed in terms of sanitary standards and 56 per cent of trays had a higher aerobic count than expected on a cleaned surface. Trays were sampled as delivered thereby ruling out contamination at the farm.

“The results provided evidence to make a case of potential hazards,” said Warriner. “RPCs used to ship food are a recipe for disaster. We recommend that the decontamination method for RPCs be reviewed to prevent carriage and transfer of human pathogens.”

The results also show a significant variation in the sanitary status of RPCs, and that many RPCs were damaged and visibly dirty. Visual inspection of RPCs revealed a proportion that were damaged or had labels affixed from previous use. While the root of this problem is unknown, inefficient cleaning systems and travel to and from wash stations in the U.S. may explain the sanitary issues.

The study was commissioned following food safety concerns expressed by the growers who are told to ship fruit and vegetables using RPCs, rather than the traditional choice, corrugated boxes.

“We have heard anecdotal reports from growers that the RPCs delivered to their farms sometimes arrive dirty,” said
André Plante, general manager of the Quebec Produce Growers’ Association. “For the safety of Canadians, we need to ensure all food in Canada is shipped using clean packaging, regardless of whether it is paper or plastic.”