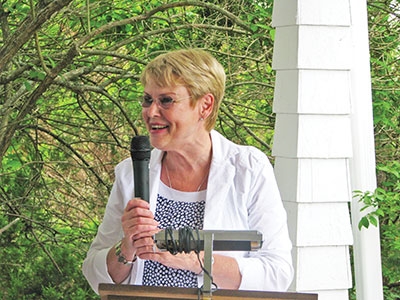 The Nova Scotia Fruit Growers Association’s 150th anniversary celebration evoked an end-of-an-era feeling. The event was held at Blair House on the Atlantic Food and Horticulture Research Centre campus in Kentville, N.S., this past summer.

The NSFGA used its sesquicentennial celebration to pay special tribute to three people who have many years
of service to the NSFGA and the tree fruit industry.

After 50 years as a provincial tree fruit specialist and a tree fruit scientist, Charles Embree retired from Agriculture and Agri-Food Canada last November.

Charles Embree
In presenting Embree with an NSFGA thank-you gift and certificate of appreciation, the NSFGA’s Doug Nichols – a former research associate of Embree – noted that during Embree’s 50 years in the tree fruit industry, he wrote 60 peer-reviewed scientific research papers and 125 technical bulletins.

Embree began his career in 1963 with the Nova Scotia Department of Agriculture as a tree fruit specialist, becoming NSDA’s horticulture and biology branch director in 1978, then joining AAFC as a tree fruit research scientist in 1982.

In the 30 years since, Embree served as a reference co-ordinator for the United States regional research committee in North Central Regional Research, and as a member of the U.S. Germplasm Committee and the North East Plant Growth Regulator Working Group, said Nichols.

Embree also has mentored graduate and undergraduate students as an adjunct professor at the Nova Scotia Agricultural College since 1988 and as a guest speaker at the annual meetings of apple grower groups in Maine, New Brunswick, Nova Scotia and Prince Edward Island, he said.

Nichols also cited the numerous awards and distinctions Embree has earned over the years: the International Society for Horticultural Science’s medal of recognition for organizing its first symposium on organic apples and pears, the NSIA’s Distinguished Life Member’s award, the NSFGA’s Honorary Life Membership, and, more recently, an honorary Doctor of Laws degree from Dalhousie University in 2010 and the NSAC Alumni Association’s Distinguished Alumnus Award.

Bill Craig
“He has been a huge asset to our association,” said NSFGA vice-president Stephen Van Meekeren as he presented Bill Craig with a commemorative gift and certificate. “I am amazed at his memory of all aspects of our industry from rootstock to pests. We were really blessed as an association to have him with us for the past 35 years.”

A lot has changed in the past 35 years, he added, but he has found growers to be open-minded.

“Now, that I am about to retire, thank you very much and all the best in the next 150 years,” he said.

“It takes a big machine to move an industry like this forward,” said Erith. “I want to thank all the many people who have contributed to the success of the industry.”

As part of its sesquicentennial celebration, the NSFGA prepared for distribution certificates of appreciation to 62 individuals who were either long-serving NSFGA members or significant contributors to the health of the tree fruit industry.

The NSFGA also has been very important, she stated, in providing direction on what cultivars to plant and what research should be done. While there are fewer growers today, they have higher productivity because of technology and information sharing among NSFGA members who have been early adapters of new technology.

“The Nova Scotia Fruit Growers Association has a heritage of 150 years of development and growth that is truly amazing,” said Linda MacDonald, the Nova Scotia Department of Agriculture’s director of corporate services and policy.

Scott Brison, the MP for Annapolis Valley-Hants, reflected on the 150 years of change in Valley fruit growing and stressed the importance of localized and regional research in light of the fact the Annapolis Valley has different demands and needs than other growing regions.