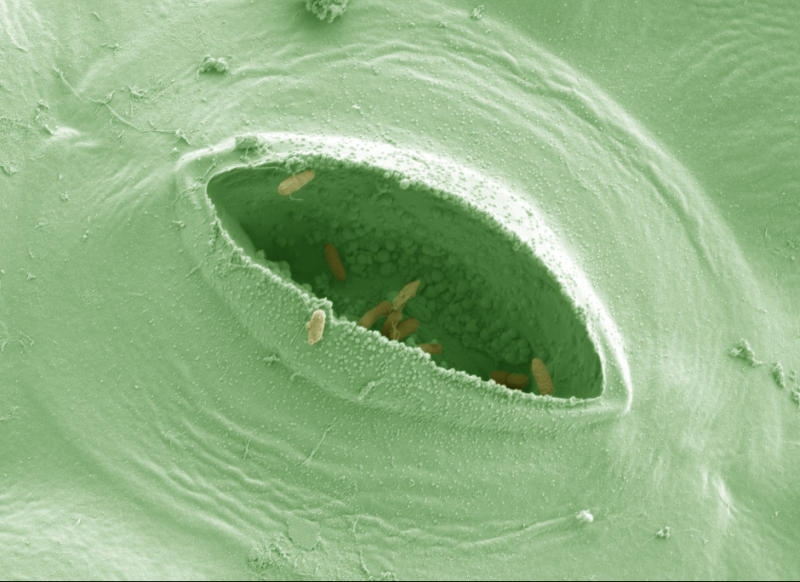 Salmonella on a lettuce leaf.

September 18, 2012 – Researchers at the Institute of Food Research are testing a new technique to ensure fresh produce is free of bacterial contamination.

Plasmas are a mix of highly energetic particles created when gases are excited by an energy source. They can be used to destroy bacteria but as new research shows, some can hide from its effects in the microscopic surface structures of different foods.

Eating fresh fruit and vegetables is promoted as part of a healthy lifestyle, and consumers are responding to this by eating more and in a greater variety. Ensuring fruit and vegetables are free from contamination by food poisoning bacteria is crucial, as they are often eaten raw, without cooking or processing that kills off bacteria.

A move away from current chlorine-based decontamination is driving the search for new, safe ways of ensuring fresh fruit and vegetables are free from bacterial contamination without reducing quality or flavour. One technique being investigated is cold atmospheric gas plasma technology.

Plasmas can effectively inactivate micro-organisms, and as they don’t involve extreme conditions, such as high temperature, they have been suggested for use in decontaminating food surfaces without affecting the structure. Dr Arthur Thompson has been investigating how well cold atmospheric plasmas (CAP) inactivate Salmonella under different conditions and on different fresh produce foods at the Institute of Food Research, which is strategically funded by the Biotechnology and Biological Sciences Research Council.

Publishing in the journal Food Microbiology, Dr Thompson found Salmonella can be effectively inactivated by plasmas but the length of exposure varies greatly depending on the type of produce. Other variables, such as the ambient temperature of the produce or the growth phase of the Salmonella had no significant effect. Inactivation on food surfaces took longer than on an artificial membrane filter surface.

To understand why, the researchers looked at the food surfaces with an electron microscope. At this microscopic level of detail, it was possible to see how Salmonella could hide from the effects of the plasmas. Different structures, such as the bumps on the strawberries, the pores in lettuce leaves or the cell walls of potatoes create shadowed zones that block plasma-reaching bacteria.

This study was conducted using a laboratory scale plasma device, used as part of ongoing research at IFR to study operational parameters and investigate precisely how cold plasmas destroy bacteria.

“The results suggest scaled up devices or combinations with other mild treatments could provide a very effective solution for destroying bacteria with little or no effect on the produce itself.” said Dr Thompson. “What this study shows is that it will be important to take into account the type of food and its surface structure.”