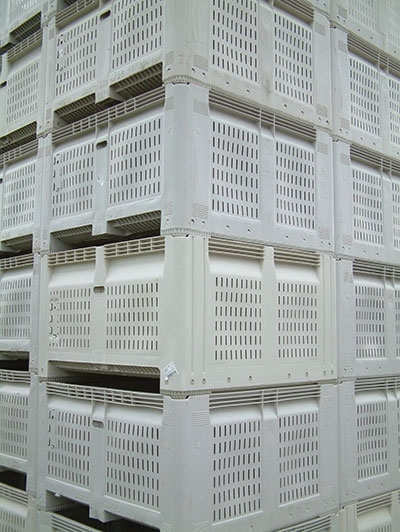 A new study by a University of Guelph professor and researcher found that reusable plastic containers (RPCs) used to ship fruits and vegetables in Canada are not properly sanitized and show traces of E. coli. Margaret Land

A new study demonstrates that reusable plastic containers (RPCs) used to ship fruits and vegetables in Canada are not properly sanitized and show traces of E coli.

The report, developed by University of Guelph professor and researcher Keith Warriner, indicates that sanitation standards of RPCs are inadequate for a second consecutive year.

In fact, using UK food safety standards for food surfaces as a pass/fail baseline, 43 per cent of RPCs failed sanitary standards due to high ATP (adenosine triphosphate) readings (equivalent standards do not exist in North America). Specifically, the fecal indicators were more prevalent in the current sampling trials compared to the study performed in 2013. Rates in the province of Quebec are especially alarming. RPCs sampled in Quebec recorded the highest indicator counts and ATP readings.

“Of concern is the high prevalence of food safety indicators, especially E. coli, which highlights the potential for the presence of enteric pathogens that could encompass viruses, protozoa and bacterial,” says Warriner, the Food Safety and Quality Assurance Program director at the University of Guelph who also conducted last year’s study.

During the study, Warriner assessed the microbiological standard of reusable plastic containers used in different fresh produce packing stations. Locations in Ontario and Quebec were visited several times during the course of the 10-week study. Every time, 10 randomly selected RPCs were sampled at each location.

A combination of ATP swabs and microbiological analysis was chosen to determine the sanitary status of RPCs. ATP readings taken at farms provided an estimate of viable cells present on the surface of RPCs. The standards set were those expected of a cleaned surface of a food contact surface within the food industry with a 20 per cent failure rate being deemed the upper limit of acceptability. Crates were sampled as delivered thereby ruling out contamination at the packing facility.

RPCs made their appearance as a few Canadian retailers recently requested that farmers ship fruits and vegetables using plastic containers. They are rented by farmers for one shipment and are expected to be returned to the United States for cleaning and sanitation afterwards.

This study was commissioned for a second year to monitor improvements following last year’s poor results and food safety concerns expressed by growers who were told to ship fruits and vegetables using RPCs rather than corrugated boxes which is the traditional choice.

This year, Warriner increased the scope of the study from 15 testing units to 160 containers. Photos of the crates tested show visibly dirty crates and labels from previous users were found on an estimated 30 per cent of RPCs, which raises questions about the efficiency of the American sanitation facilities.

Interestingly, it was recently announced that the sanitation procedures for RPCs have been strengthened and that RPC manufacturers established micro-standards to use as indicators of cleanliness.

“Given the state of randomly selected RPCs, I would question whether they are even sent to the U.S. for sanitization at all,” said Warriner.

There are no sanitization facilities in Canada for reusable plastic crates.

“Food must be shipped in safe containers, regardless of whether they are corrugated boxes or plastic,” said John Kelly, executive vice president of the Ontario Fruit and Vegetable Growers Association (OFVGA).