September 13, 2017  By University of British Columbia 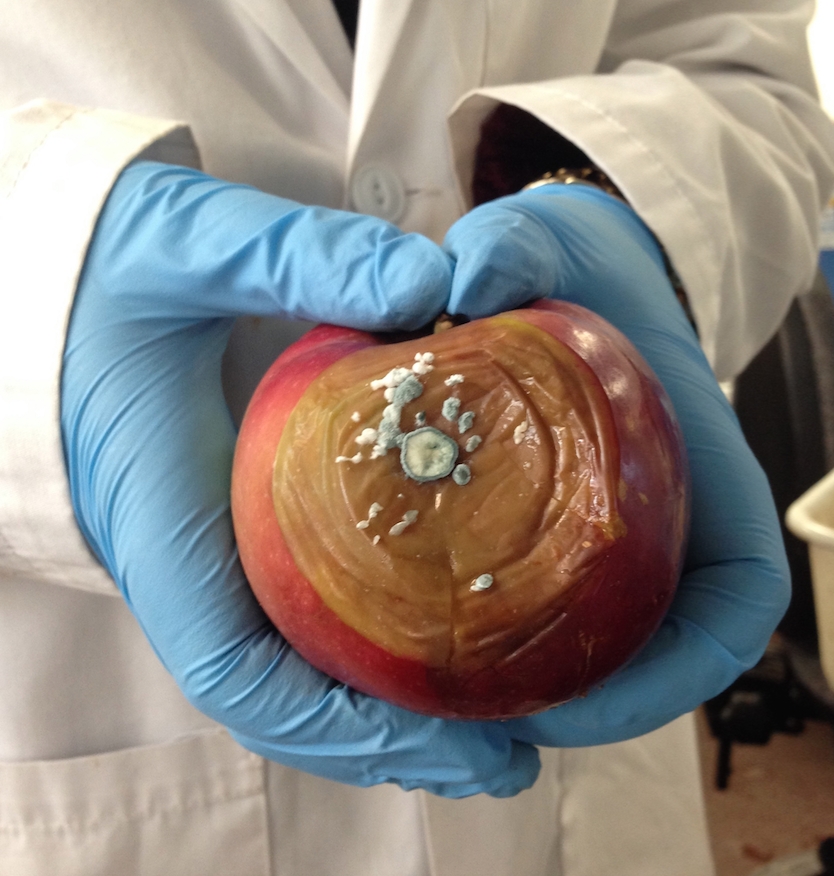 Rhiannon Wallace, a PhD candidate at University of British Columbia’s Okanagan campus, has developed a way to stop, or at least control, blue mold – a pathogen that can rot an apple to its core. Wallace’s research has determined that bacteria, originally isolated from cold Saskatchewan soils, may be the answer to preventing mold growth and apple rot while the fruit is in storage or transport.

“The majority of postharvest fungal pathogens are opportunistic,” explains Wallace, who is working with UBC Biology Prof. Louise Nelson. “If a fruit is physically damaged, it is at an increased risk of rotting during storage. So a tiny blemish on the fruit from harvest or handling can turn into a conduit for attack by fungal pathogens and subsequently result in the development of mold.”

The fungal pathogen Penicillium expansum, also known as blue mold, destroys millions of stored apples each year. Post-harvest rot can result in yield losses of up to 20 per cent in developed countries such as Canada, while developing countries can lose up to 50 per cent of the crop, Wallace says.

The goal of her research is to reduce the amount of produce lost due to post-harvest blue mold. Traditionally, post-harvest rot has been controlled with chemical fungicides, but Wallace says these treatments have become less effective as the pathogen has developed resistance and there is consumer pushback to the chemicals. The research by Wallace and Nelson aims to provide a safer and more sustainable alternative to fungicides.

Wallace suggests the solution may lie in a particular bacterium specific to Saskatchewan soil. Pseudomonas fluorescens, due to its prairie roots, can survive in cold storage – a characteristic that is key to dealing with cold-stored produce like apples.

During tests conducted at the British Columbia Tree Fruits Cooperative storage facility in the Okanagan, Wallace determined that these bacteria can prevent blue mold from growing on McIntosh and Spartan apples while in storage. In addition, during these experiments, the bacteria provided control of blue mold on apples that was comparable to a commercially available biological control agent and a chemical fungicide.

“What is novel about our research is that we show the bacterial isolates we tested have an array of mechanisms to inhibit or kill Penicillium expansum (blue mold) on apples while fungicides generally act only by a single mode,” Wallace says. “These findings suggest that the development of resistance by blue mold against our soil bacteria is unlikely.”

She does note that while all three isolates of P. fluorescens tested provided control of blue mold, the level of control provided by each isolate varied with apple variety.

Wallace’s research, supported by the Canadian Horticulture Council and Agriculture and Agri-Food Canada, was recently published in the journal Postharvest Biology and Technology. Further support came from the BC Tree Fruits Cooperative and Agriculture Canada’s Summerland Research and Development Centre.