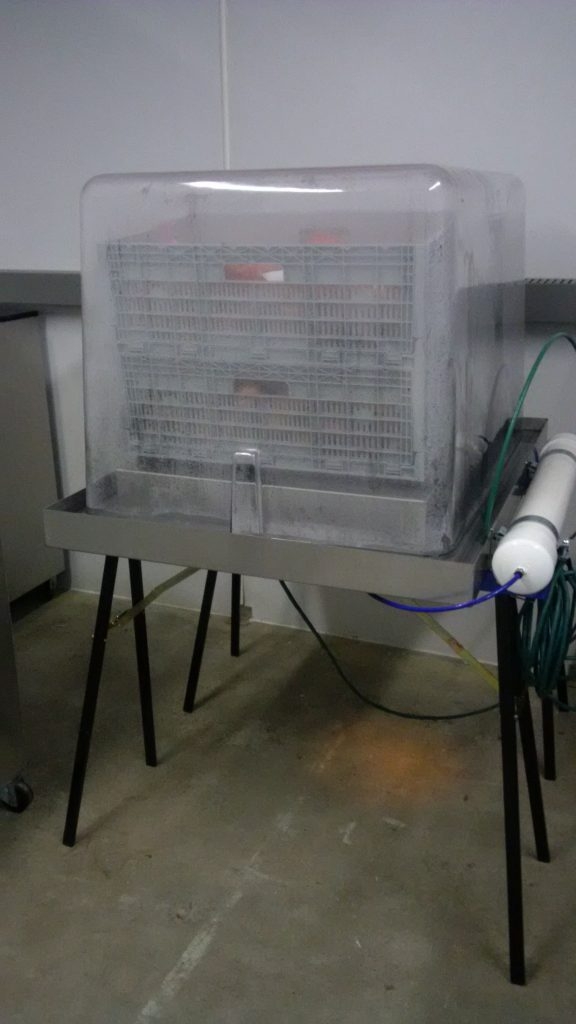 December 15, 2016, Simcoe, Ont – A newly developed technology could result in longer storage life for apples and better quality fruit when they come out of cold storage.

Apples have long been stored in low oxygen environments – called controlled atmosphere storage – to keep them fresher longer and allow Ontario apple growers to market fresh fruit all winter long and not just during the fall harvest season. But it’s never been possible to determine how low the oxygen levels for a specific variety can go before the fruit’s quality begins to suffer – until now.

SafePod measures apples’ response to atmospheric stress by monitoring their respiration rate while they are in storage, allowing storage operators to use the lowest safe oxygen concentration possible.

“Fruit respires using oxygen, just the way people do, and as you lower the oxygen level in their storage environment, they become stressed,” explains Dr. Jennifer DeEll, the fresh market quality specialist for horticultural crops with the Ontario Ministry of Agriculture, Food and Rural Affairs (OMAFRA).

“At their breaking point, when they can’t tolerate the low oxygen level any more, they switch to anaerobic respiration, which is fermentation,” she says. “You want to be able to get that oxygen level as low as possible while still maintaining safe levels because the lower the oxygen, the firmer the fruit and the better the quality.”

An in-storage oxygen concentration of two to three per cent has been standard in the Ontario apple industry for many years, the lowest level that is considered safe for all apple varieties.

SafePod is a small unit that can be filled with four bushels of apples and placed into a large commercial storage amongst the other bins of apples. It lets storage operators measure the actual respiration of the fruit inside the unit by giving a reading of both oxygen and carbon dioxide levels, which together result in a respiration quotient that can indicate when the apples are becoming stressed.

DeEll has been testing SafePod with Empire apples in collaboration with the Ontario Apple Growers, the Norfolk Fruit Growers’ Association and SafePod’s manufacturer, Storage Control Systems of Michigan.

“We could get down to 0.6 per cent oxygen with the Empires in our study and they were fine,” says DeEll.

Levels can be established annually by the storage operator specific to the crop, growing season, variety and even the orchard the apples come from.

“Adding a month or two to storage of apples can really boost the domestic supply of local apples and help ensure they are firm and crunchy when they come out of storage and go to market,” says DeEll.

The three-year research project, which just wrapped up, was supported in part through Growing Forward 2, a federal-provincial-territorial initiative.