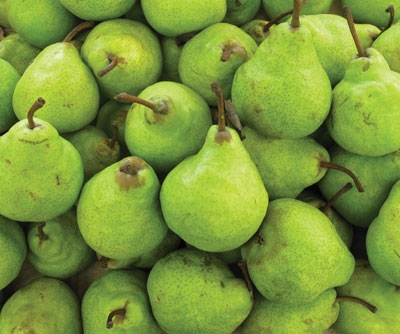 It may seem difficult to confuse pears with apples but when it comes to storage, growers need to be reminded of the differences between the two tree fruits.

On the surface, it might seem pretty difficult to confuse pears with apples. But when it comes to storage, Dr. Robert Prange of Agriculture and Agri-Food Canada (AAFC) states growers need to be reminded of the differences between the two tree fruits.

Dr. Prange, a post-harvest physiology researcher with the Atlantic Food and Horticulture Research Centre, states growers must remember there are a great variety of treatment protocols for the various pear cultivars.

“We must recognize our pear industry isn’t large enough to demand a lot of research on it,” he emphasizes.

Growers can make money with pears, Dr. Prange says, but pears take longer as an orchard system to come into production than apples.
“Plant pears for your heirs,” he recommends.

The key to storing pears is firmness, which is determined by the pears’ maturity and time of harvest, explains Dr. Prange. Pear firmness declines during maturation and post-harvest pear quality is dramatically affected by temperature. All pear varieties should be air stored below 0 C, he adds.

“If you wait two weeks, you will get 100 per cent core breakdown.”

The quicker the pear core gets down to a temperature of -1 C, the more pear storage problems will be prevented, he says.

With low storage temperature; however, it is difficult to achieve this balance. He recommends growers consider polyethylene bin liners, “if they can be combined with good temperature control,” he adds.

Dr. Prange stresses that pear ripening is different from ripening in apples. Most pear cultivars require cold storage at -1 C before they will ripen normally at room temperature.

Cold storage time at -1 C varies for each cultivar, he says, with Bartlett taking only two to three weeks, Bosc four to five weeks and d’Anjou seven to eight weeks.

The best ripening temperatures are between 15 and 21 C, says Dr. Prange, adding consumers must also let the fruit set for a short period at room temperature for the final ripening process to get the best flavour and texture for the fruit.

There are also fewer post-harvest chemicals, he notes, for pears than for apples. 1-MCP (Smartfresh) is not recommended for pears, as it stops ripening. Scald control chemicals are also no longer available in Canada and, although DPA scald control (currently used on apples) is allowed on pears at 0.1 parts per million (ppm), it could soon lose European Union approval, Dr. Prange says. Superficial scald on d’Anjou can be controlled by delaying ripening, while pink end in Bartlett is caused by cold temperatures in the orchard before harvest and is triggered by ethylene in storage and by ripening. Senescent scald and core breakdown (core rot, brown heart or mealy core) are caused by over-mature fruit and friction marking by rough handling, he adds.

Controlled atmosphere (CA) storage is recommended for pears but the CO2 level must be kept below one per cent, lower than CO2 levels for apples. Dr. Prange says the incidence of core browning, senescent scald and internal breakdown are also reduced by CA storage.

CA stored pears maintain high quality much longer than regular air (RA) stored fruit, and disorders, such as scald and internal breakdown, are reduced, Dr. Prange says. DCA (dynamic controlled atmosphere) storages can store fruit at an oxygen level as low as 0.4 per cent and the method also offers maximized pear quality over CA storage, he says. Bartlett stored six months in CA had a core breakdown of 15 per cent compared to just four per cent in DCA storage, while d’Anjou stored eight months in CA had 12 per cent superficial scald compared to zero per cent in DCA.

Dr. Prange says both DCA and CA reduce friction marking, but there is high maturation in CA compared to DCA.