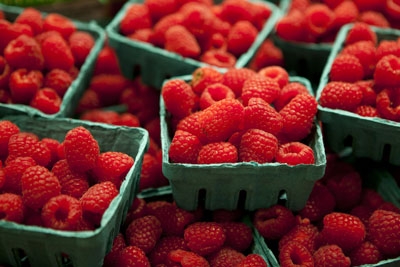 The Webster family has been farming in Nova Scotia for eight generations. In the past 20 years of raspberry production, the brothers who currently operate the farm have seen many changes, including the provision of wholesale marketing and you-pick sales.

Webster and his two brothers – Chris and Brian – have been involved in raspberry production in Atlantic Canada for the past 20 years. And during that time, they have experienced almost constant change.

In the late 1980s, the brothers’ adventure in raspberry growing started with the planting of a half-acre trial plot of three red, summer fruiting raspberry varieties: Nova, Festival and K81-6. While disease issues eliminated K81-6 from the mix, over time, Nova proved to be a more consistent performer than Festival. In the early 1990s, the Websters decided to focus production exclusively on Nova.

It was a smart move on the part of the Websters. Over the past 20 years, the brothers have experienced a three-fold increase in Nova yield, a change Greg credits to being open to adjusting those four crop inputs – variety, management, irrigation and pest control.

In the beginning, the Websters ran mostly a you-pick operation. Over time, they have shifted toward limited wholesale of berries packaged in pints and plan to move toward packaging using plastic clamshells.

Production management has also shifted over those 20 years. At the start, the Websters grew raspberries using a T-trellis system with 10-foot spacing. Eventually, they changed to a fixed V-trellis system while orienting their raspberry rows to a north-south direction to give equal sun exposure to both sides of the canes.

The brothers also established windbreaks around their raspberry fields to provide shelter for the berry crops from wind and winter injury. Over time they also changed their raspberry cane density, thinning to a one-foot maximum. The brothers also tip their canes and tie them after thinning. Greg said the farm is moving away from full suppression to a modified biennial system.

Irrigation was initially provided using a high-rise sprinkler system. The system was considered labour intensive so they decided to try overhead water application using hose reels. Not satisfied with disease control and picking access, the Webster brothers switched to trickle tape wire mounted 14 to 16 inches above the ground to permit mowing of the berry rows.

The operation’s plant nutrition program started in the 1990s with a granular fertility program. In the early 2000s, the Websters switched to a foliar feeding program using Agro K products.

Due to disease pressure, Greg said he would not want to grow berries without fumigation. The Webster brothers also follow an IPM program for the pesticides they use.

“Be careful with pesticides, especially when and how you apply,” said Greg. “The new products are more selective and there are new pests.”

In the early 1990s, the Websters modified their pesticide sprayers and again, 15 years later, modified them to improve their spray coverage. They recently replaced their spray nozzles with a ceramic, hollow-cone model for longer life.

Weather changes have also played a role in raspberry production on the Webster farm. In 2012, the crop experienced ultraviolet scalding four times, which manifested itself in berry colour variability.

“Every year presents a different set of weather issues,” said Greg, adding that food safety issues and weather shifts have also meant a shift to pre-cooling the berries immediately after picking to get them successfully to the retailers.

Also, Employment Insurance rule changes over the years have caused changes to farm labour requirements. Canadian seasonal workers have disappeared on the Webster farm, replaced instead by 24 Mexican migrant labourers.

“We have had to move to offshore labour,” said Greg.

The Websters introduced honeybees to help pollinate their strawberry fields in the mid-1990s. While the rented bees helped solve an irregular pollination and yield problem in the brothers’ Cavendish fields, they also helped out in the raspberry fields.

“I typically bring in 20 hives for both berry crops,” explained Greg, adding he doesn’t typically use bumblebees for pollination. “I am not overly enthusiastic about bumblebees. They are prohibitively expensive, although they work harder in cold, wet weather.”