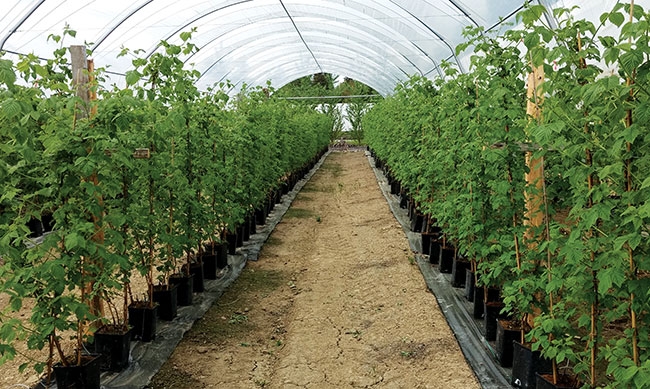 To boost both production and quality, some Canadian producers have been using high tunnels in conjunction with container production and a soilless growth medium.

“There is growing interest in Ontario,” reports Erica Pate, fruit crop specialist with the Ontario Ministry of Agriculture, Food & Rural Affairs, “and there are a couple growers who are in the early stages of production.” Pate says there has been a request for funding for a project in which the government will partner with others to study container high tunnel raspberry production, and confirmation should be received in February.

In Quebec, however, a few growers have been using this type of production for years. Among them is Fraises de l’ile d’Orleans in Saint-Laurent-de-l’Île-d’Orléans owned by André Gosselin, a retired Laval University horticultural scientist. Gosselin considers high tunnels essential for raspberry production in the climate of Quebec, and also notes that using soilless growth mediums in containers eliminates root diseases, along with favouring higher yields and better fruit quality. He uses a peat moss based growing medium developed over many years in collaboration with Berger, a company located in Saint-Modeste, Que. which also has outlets or processing plants in several provinces and two U.S. states.

Fertigation of raspberries grown this way, adds Gosselin, should be based on recommendations from Northern Europe (Holland, Belgium and Switzerland).

“Cultivar selection must be based on conventional criteria such as yield, fruit quality and shelf-life, disease resistance, winter resistance, early maturation and so on,” Gosselin says. “The good news is that excellent new genetic selections are now available from Holland, Italy, France, Poland and more, but they must be tried and evaluated at various sites and growing conditions.”

Also, in Quebec’s Ile-d’Orléans region, Onésime Pouliot Petits Fruits has been growing container-high tunnel raspberries since 2008. They also grow blueberries, strawberries and sweet potatoes, and sell their products through major food chains throughout Quebec, the Maritimes and parts of the U.S.

The farm’s business development manager Joey Boudreault notes because wet raspberries have a very limited shelf life, the dry conditions provided by high tunnels is a game-changer in itself. Having plants in pots allows growers to move some into storage when the weather turns cold, and lay the rest down and cover them for the winter. This means that growers like Onésime Pouliot Petits Fruits can therefore use varieties that would not otherwise survive conventional field cultivation, maximizing both taste and yield.

Staggered harvest
Putting some of their canes in cold storage has another advantage.

“When the spring comes, we take some of them out but not all of them,” Boudreault explains. “We keep some in there, in dormancy. About a month later we take them out, and they progressively start to give fruits like they normally would in the spring. So, we can expand the season, and have a more constant supply of berries throughout the season instead of having one big boom of berries.” Their season runs from mid-July to the end of September, or even very early October depending on the year.

Currently, Onésime Pouliot is unable to meet all of the marketplace demand. But, Boudreault says they should be able to completely meet demand as production grows.

“We do export some of the raspberries in the U.S., to smaller farmers markets,” he adds. “We want to expand that as well. It is good business with the exchange rate.”

While it’s hard to compare the yield between ‘bush’ field-grown raspberries and the container-high tunnel varieties (each cane grows to about six feet tall), Boudreault says the latter obviously benefits from fertigation, which makes them highly productive. They are also much easier to harvest.

“Harvest represents around 50 per cent of our costs, so improving that is major for profit,” Boudreault notes. “We try a lot of varieties each year. For now, the Tulameen stays in front of all of them. Some other varieties have better yield then Tulameen, but it stays the reference in term of taste. We believe that we will get better results long-term with this instead of having more yield of a poorer-tasting berry that will maybe disappoint a customer.”

Onésime Pouliot farm is also a nursery in that it sells varieties suited to container-high tunnel production, and demand is growing for that every year as well. Boudreault notes that sometimes it takes time for people to decide to start this type of production because it’s more expensive than field cultivation.

“You have to put more work in as well,” he says. “The 15 to 25 irrigations per day needs to be taken care of by someone, and growers usually do not need more work. We have a full-time employee dedicated to check the irrigation, verify that everything goes well in the tunnels, program the pumps and injectors, check that the tubes are clean and that everything is going well,” he adds. “This is how much monitoring you need to do. This is very costly production, so if you are going to do it, you have to do it well. Everything is important and the attention to detail will make a big difference down the stretch.”

Boudreault notes that harvest efficiency is key to keeping expenses down, and that they are learning how to be more efficient all the time. They also make high tunnels themselves and might even start selling them to other growers in the very near future.

Research results
Yves Desjardins, professor in the Institute of Nutrition and Functional Food at Laval University, has conducted several studies of soilless high tunnel raspberry cultivation with colleagues in the recent past. With cultivar Jeanne d’Orléans, he and his team found that compared to field-grown plants, they produced a taller and thicker primocane, more fruit and higher total fruit yield. He says that while the growth medium is important, after a couple of months, the roots occupy most of the pot volume and therefore fertigation is the main factor that is influencing plant development.

In another study with cultivar Autumn Britten, Desjardins and colleagues studied responses to fertigation solutions, various substrates and propagation methods. Higher fruit yield was mostly found in this study, he says, due to the advancement of the peak fruiting period because of higher greenhouse temperatures in early spring while root-cutting propagation occurred.

“We are indeed favouring the fastest establishment to obtain good yield of primocane raspberry. Having root cuttings that have a head start at transplantation and providing higher temperatures under tunnels allow for a rapid establishment of the crop,” Desjardins says. “I would personally say that for raspberry, high tunnel production is a must,” he adds. “Californian companies like Driscoll is growing under tunnels for the quality of the fruits, the increased shelf life and size. In northern climate conditions, the gain in productivity is even more important.” He confirms that several, “large Quebec growers are doing very well with this production style.”