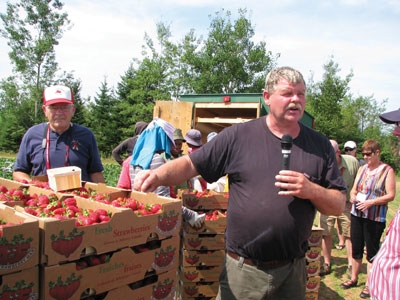 The 65 delegates from 12 U.S. states and six Canadian provinces in the North American Strawberry Growers Association started their tour by visiting Webster Farms of Cambridge, N.S., located in the Annapolis Valley.

Greg Webster told the visitors he and his two brothers moved from perennial raspberry production to biennial growing over the past several year to reduce their labour and management efforts.

They are also doing berry test planting with numbered cultivars from the Atlantic Food and Horticulture Research Centre’s fruit breeding program, Webster adds, although the only raspberry production cultivar they are now growing is Nova. It is a good variety, he said, but they are looking to replace it.

Webster says they are examining the just-named raspberry cultivar, Eden, which he feels is “head and shoulders above Nova. We don’t want for Nova to peter out before we look at another cultivar.”

According to Webster, all cultivars appear to have a life cycle.

“We tried Encore one year,” he recalls. “It was the berry from hell,” he said, adding that it bled after picking.

Since an adjustable raspberry trellis system did not work for them, the Websters modified a three-wire replacement trellis.

Increased problems with two-spotted spider mites prompted the brothers to place beehives around their berry plots.

In 2010, the three brothers planted new raspberry plots from which they are now harvesting about 29,000 pints per acre.

By modifying the operation’s trellis system, adopting biennial production and drip irrigation, Webster estimates they’ve increased their raspberry production from 5,000 pints per acre for all plots to 10,000 to 16,000 pints per acre, exceeding the average Nova Scotia yield.

The Websters also grow strawberries; they are currently trialing two new cultivars, including KO412, which Webster likes in a matted-row system. Production averages about 12,000 to 14,000 quarts of strawberries per acre from their matted rows, which they renew every one to three years.

Webster adds that they tried the strawberry variety Myra but it tasted and looked unpleasant.

The brothers have also tried growing the variety Jewel but removed it after one year due to phytophthora and root rot issues.

Vital Berries
Rolf Meiers of Centreville, N.S., manages about 25 acres of day-neutral strawberries, mainly Albion and Dar Select, growing in a plasticulture system, plus an additional 18 acres of June-bearing berries. Experimentation has shown him that many common strawberry varieties grown in the Annapolis Valley do not thrive under plastic.

As a result, Meiers follows a strict crop management program involving two to three sprays for powdery mildew during the growing season while cropping a row for two years. He then lifts the plants, fumigating the row before replanting to control the high incidence of verticillium that has occurred in his fields in the past.

A great believer in compost, Meiers applies municipal compost to the row at a rate of 1.5 to two pounds per row foot before planting the crowns into plastic. Overall, he applies about 1,500 pounds of compost per acre. He has found it has improved his soil quality while also saving him about $300 in dry fertilizer costs.

Every month, he brews a compost tea and applies it to his berry crop through the trickle irrigation system, along with 26 pounds of nitrogen and 42 pounds of potassium.

Meiers uses only trickle irrigation on his strawberry plantings and claims he experienced a 95 per cent survival rate in an 11-acre plot of strawberries he planted during last July’s drought.

He also uses Typar row covering, applying it over the rows in early October. He has found it works very well at insulating the crop and the strawberry crowns will continue to grow under the covers until early December.

During the fruiting season, Meiers harvests Albion every second day, picking about 50 flats per acre. He also has a five-week Dar Select season, although he has found the variety is temperamental to manage and very susceptible to powdery mildew.

Millen Farms
In northern Nova Scotia near Debert, Curtis Millen operates the province’s largest berry farm with extensive trickle irrigation and fertigation for 55 acres of matted-row strawberries, 55 acres of day-neutral berries and 20 acres of short-day (60-day) berries, with the short-day and day-neutrals both produced using plasticulture.

“He is just experimenting on a big scale, trying to find the right varieties for his needs,” says John Lewis, a berry and grape specialist with Perennia. He adds that Millen is working to extend his berry season earlier into the spring and later into October.

Millen’s objective is to produce berries under row covering for spring and winter protection.

“Our intention is to make sure we don’t have to protect more than 20 acres for frost early in the spring,” Millen says.

He also believes that growing strawberries under poly is a more desirable production method.

“With matted-row we are running into tired plants and ugly fruit,” he says.

Millen’s short-day strawberries are not yet profitable and so he continues to search for the right cultivar while planting them as three- to four-week-old plugs under high-density poly using a tractor fitted with GPS and auto-steering.

“We are still looking for that silver bullet,” he says, adding every cultivar he now grows is under trial.

Early in the 2012 season, Millen purchased a Fresh QC traceability system, which gives each picker and the boxes they fill a distinctive bar code. This system works as a means of traceability and quality control, and is a productivity monitor.