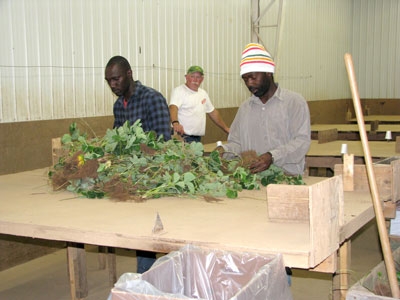 Participation in the Seasonal Agricultural Workers Program is very static according to Ken Forth, president of Foreign Agricultural Resource Management Services (FARMS), the non-profit organization that oversees SAWP. There are about 27,000 participants annually, with 15,000 in Ontario. Dan Woolley

The landscape of the agricultural workforce is changing in Canada, affecting Canadian workers, workers from other countries and employers as well. More than 190,000 temporary foreign workers are employed in Canada each year and about 40,000 of those are in the agricultural sector, says Dr. Kerry Preibisch, a sociologist in the Department of Sociology and Anthropology at the University of Guelph.

Dr. Preibisch’s look at changes in the Canadian farm labour market over the past decade was recently published in the International Journal of Sociology of Agriculture and Food and one major change she’s noticed relates to how many countries migrant farm workers now hail from.

“People from an increasingly wide range of countries are finding jobs on temporary visas in Canada’s food system due to government policy changes in 2002,” notes Dr. Preibisch.

Back in 1966, Canada instituted the Seasonal Agricultural Workers Program (SAWP), a temporary migration program based on bilateral agreements with 13 different countries, with most from Mexico and Jamaica. Since 2002, however, the government has allowed employers who could demonstrate they face a labour shortage for any low-skilled occupation including agriculture to hire migrants on temporary visas from anywhere in the world. (This program created in 2002 is called the Pilot Project for Occupations Requiring Lower Levels of Formal Training, National Occupational Classification C & D, and was formerly called the Low Skilled Workers Pilot Project.) Dr. Preibisch notes that by 2008, the Canadian agricultural sector had employed foreign workers from almost 80 countries. And the type of work they are hired for, she observes, has also broadened, from picking bait worms to vaccinating chickens.

However, as unemployment stays high or worsens in some areas of Canada, the question arises as to whether as many temporary migrant workers will be needed in the country’s agricultural sector. Dr. Preibisch asserts that even though unemployment here has risen in some provinces, Canadians avoid many agricultural labour jobs as they are difficult and seasonal.

“Many employers do want to hire Canadians, but migrants can become a preferred source of labour,” she notes. “They also find it hard to retain Canadians in some cases.”

To be able to hire migrant workers, employers currently have to advertise and show they can’t fill the positions with Canadians (a labour market opinion report), but Dr. Preibisch notes there are ways around this requirement.

“The employer might do limited advertising, and it’s also plausible that some Canadians are hired,” she explains. “But the first day of work is made so hard and unpleasant that they quit, and word spreads.”

Participation in SAWP is very static, says Hamilton-area broccoli grower Ken Forth, president of Foreign Agricultural Resource Management Services (FARMS), the non-profit organization that oversees SAWP. There are about 27,000 participants annually, with 15,000 in Ontario. Forth says SAWP does not track demand for labour in different sub-sectors, such as the fruit and vegetable industry.

When asked to comment on the difficulty or ease of the SAWP process for Canadian farmers, Forth says: “It’s fine. That’s speaking for Ontario. We’ve fixed it over 46 years, and it works pretty smoothly. You do have to plan eight to 10 weeks ahead of time, and submit your labour market opinion, which is eight to 10 pages, and then send to Service Canada, and in Ontario, you get it back in one to 10 days. I don’t know how you could call that cumbersome. There are many aspects to the process – there are logistics involved, finding the workers in the other country, and so on.”

FARMS was recently recognized for its contributions to the Ontario horticulture sector, receiving the Ontario Fruit and Vegetable Growers’ Association (OFVGA) Award of Merit (see article on page 20).

With regard to working conditions, Human Resources and Skills Development Canada (HRSDC) dictates that all foreign workers and their employers must sign a contract that (as stated on the HRSDC website) “provides details about the worker’s job and conditions of employment, including the maximum number of hours of work per week, the wage rate for those hours, and the amount of money that will be deducted from the worker’s pay.” The HRSDC website also describes government liaison officers of source countries in Canada who can intervene on a foreign worker’s behalf, and “confirm that workers have acceptable housing, ensure that workers have health insurance and Workers’ Compensation coverage, gather details of worker injuries, collect pay records from employers, approve worker transfers, and consult with employers who wish to terminate a worker’s contract.”

Dr. Preibisch notes there is a formal role for sending countries in the SAWP, but not so under the new 2002 program (Pilot Project for Occupations Requiring Lower Levels of Formal Training, National Occupational Classification C & D), further weakening the protection afforded to migrants.

Permits
Work permits given to temporary foreign agricultural workers are employer-specific (which means a person coming to Canada is permitted to work for only one employer), and Dr. Preibisch notes that in the eyes of many, this is an urgent issue as it accords employers disproportionate power in the employment relationship. She also notes that the ability of Canadian employers to pull from a ballooning number of countries hasn’t had a positive impact on temporary workers in many cases.

“While workers in processing plants are, for the most part, in unionized environments with standardized working conditions, overtime pay and so on,” she says, “those on farms are more vulnerable.

“Simply put, the increased competition from workers from many other countries puts pressure on people to accept unreasonable working conditions,” Dr. Preibisch says. “If they don’t agree to working longer hours, for example, workers can be threatened with being replaced with those from other places. Many Mexicans are now being replaced with Guatemalan people, not so much because they’ll take less pay, but because Guatemalans are perceived as willing to work longer hours and work harder in comparison.”

Migrants from many areas of the globe are more desperate than previous groups of workers, she asserts: “They face less political freedom and more marginalization, and are willing to work very hard here.”

In her study, Dr. Preibisch also observes a significant lack of regulation and monitoring of migrant recruitment and employment in Canada.

“This can and does result in abusive practices by employers, and some conditions which could be considered close to slavery,” she states.

While employment standards are provincial – employees in Ontario, for example, must be given two 15-minute breaks and a 30-minute lunch period within an eight-hour shift – Dr. Preibisch says there needs to be more co-operation between federal and provincial labour agencies to ensure all workers are treated according to legal requirements.

These concerns are echoed by many other academics in a new 2012 book of essays called Legislated Inequality: Temporary Labour Migration in Canada, co-edited by University of Ottawa professors Patti T. Lenard and Christine Straehle. In an October article on the CBC news website, Lenard said, “The book clearly documents what had long been suspected: temporary workers in Canada are vulnerable to abuse.”

This vulnerability is due in part, she says, to a condition of temporary labour in Canada that creates systemic inequality: workers “are not permitted to change employers, which means they are denied one of the main ways in which employees can protect their rights.”

With the current employer-specific permits, if an employee wants to leave his or her employer for any reason, Dr. Preibisch says, a process does exist to have the permit applied to another employer, but it is too lengthy to have any impact.

“Therefore, some are calling for sector-specific permits,” she notes. “So workers are able to work at any employer in the sector within the time frame of the work permit.”

However, there is also the perspective among Canadian employers in the agriculture industry and other industries who hire migrant workers that if employers live up to their commitments to their employees, they do not want them leaving for another employer after they have gone through all the hoops and time and effort to bring them here and train them. Speaking with regard to SAWP, Forth does not support the idea of sector-specific permits.

“The worker has responsibilities and so do the employers,” he says. “The employers have the legal responsibility to provide proper housing, a minimum number of hours of work, and so on. The housing is government-inspected and if it fails to meet the standard, the SAWP employer can be kicked out of the program for two years. I have never heard a call for sector-specific workers from my members, from our government, from the workers or from representative of foreign governments, and I meet with them all the time. It’s not on the table.”

Other trends
High unemployment numbers may mean that more Canadians turn to farm labour jobs. In addition, the Canadian government announced in April 2012 that preparations are being made to link the federal Employment Insurance program to the Temporary Foreign Worker program. This could mean employment insurance benefits could be restricted or denied to people in areas where foreign workers have been hired in the past, thereby encouraging the Canadian workers to take the jobs.

In addition, it could mean that employers in these areas could be denied access to foreign workers. Response from agricultural employers has been mixed; the thought of hiring Canadians to take jobs under duress seems rife with difficulty to some.

Skilled labourers are a different matter. They usually seek to immigrate permanently to Canada instead of applying as temporary workers – tens of thousands do so annually. The huge number of applications has led to a seven-year processing backlog, and Citizenship and Immigration Canada has dealt with this by destroying applications from more than 280,000 people. The $130 million in fees paid by applicants with unopened files is being refunded and they will be able to re-apply under new criteria. However, those who had files that were just about to be processed are upset, and have launched a legal challenge.

The federal government is making other changes with regard to immigrant workers. The Provincial and Territorial Nominee programs will be expanded, allowing provincial/territorial governments to go through current applications and highlight those that match their needs. In addition, the creations of the “Canada Experience Class” will mean that the best and brightest foreign students and skilled workers who already have experience here will no longer have to leave the country in order to apply for permanent residency. Lastly, the federal government is expected to make an announcement soon regarding changes to the immigration point system.