May 9, 2017  By Ohio State University College of Food Agriculture and Environmental Sciences 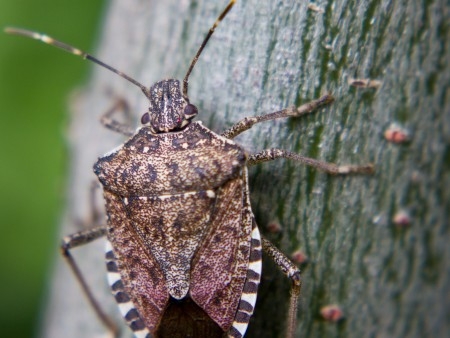 May 9, 2017, Columbus, OH – When Celeste Welty unzips the white, nylon cage, none of the stink bugs inside move.

Why wouldn’t they be? Inside their cage, they enjoy spa-like conditions with all the sunflower seeds and nuts they can feed on, the warmth of the sunlight coming through the window beside them and a few house plants to make it feel like the outdoors, though they’re in a lab.

Young offspring clutch the walls of a separate cage inside what appears to be a refrigerator but instead is a warming chamber.

Such special treatment for the brown marmorated stink bug, which farmers despise and homeowners often flick out of the way when they discover them indoors during the cold months.

Thriving on a range of fruits and vegetables, the marmorated stink bug has damaged or destroyed enough crops in Ohio and across the United States to get the attention of entomologists nationwide.

Welty, an Ohio State University Extension entomologist, is involved in a 15-state study to determine the best, and ideally natural, way to get rid of the marmorated stink bug. The study is one of several being done on stink bugs through Ohio State’s College of Food, Agricultural, and Environmental Sciences.

The brown marmorated stink bug is a foreigner to the U.S., and in the absence of natural predators here, its populations are exploding, particularly in the mid-Atlantic region. Arriving in the U.S. from China, the grayish brown bug was first detected in Allentown, Pa., in 2001. Six years later, one was reported in Ohio.

How the first brown marmorated stink bug got to the U.S. is unclear, but often it is carried through boxes or packages, a hitchhiker of sorts, Welty said.

“They like to nestle down into protected, narrow spaces, and that’s often present in packing materials,” she said. “That’s why they’re known to go in cargo and hang out.”

Three years ago, a grower in eastern Ohio ordered a shipment of snow fencing, the perforated plastic fencing that comes in large rolls. When the grower unrolled the fencing sent from Pennsylvania, he found live stink bugs sprinkled throughout.

From Welty’s colony of marmorated stink bugs, she takes the eggs and places them outside the lab on plant leaves. Two days later when she retrieves them, she hopes some have been attacked by the bug’s natural predator, the tiny Trissolcus japonicus wasp. Also a native of China, the wasp was detected in the United States in 2014 and has since been found in eight states but not yet in Ohio. And nowhere in the U.S. is it plentiful – at least not plentiful enough to keep down the marmorated stink bug population.

“The wasp appears to be spreading on its own, but it’s so early on in the introduction of the wasp that we really don’t know,” Welty said.

Welty and entomologists across the U.S. are hoping to happen upon some T. japonicus wasps in their states.

“We’ve known for a number of years now that this one species of wasp would be great to have,” Welty said. “The stink bug is a terrible pest in agricultural crops, and we want to know how to control it with more sustainable methods than just spraying a lot.”

Stink bugs of any species can be tricky to spot outdoors. They hide well – stationing themselves on the underside of leaves and the backside of flowers.