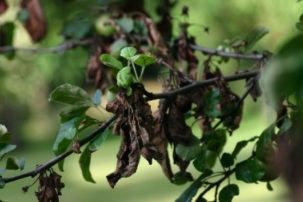 May 9, 2017, Guelph, Ont – The Ontario Ministry of Agriculture, Food and Rural Affairs is again developing fire blight risk maps during the 2017 apple and pear blossom period based on the Cougarblight Model to help support apple and pear growers with their fire blight management decisions.

The risk is based on inputting the seven-day weather forecasts from 67 locations from various regions throughout the province into the Cougarblight model. The results from Cougarblight are then mapped and posted on the OMAFRA Website.

This year, there will be a separate webpage for apples and pears (in English and French).

The maps are animated and will cycle through the seven-day fire blight risk predictions based on the seven-day weather forecast. Updated fire blight risk prediction maps will be generated and posted three times per week (Monday, Wednesday and Friday) until bloom period is over. A new feature on the maps will allow growers to zoom in and out of the maps, reposition them to their specific locations and pause or start the maps.

As with any model, the fire blight risk is a general guide and environmental conditions may be more conducive for fire blight infection in a particular orchard than what is indicated by the maps. All apple and pear growers are encouraged to run either the Cougarblight or Maryblyt model with data generated from their orchards for a more accurate prediction.

If the fire blight situation from last year is not known, it is best to assign the orchard to ‘Fire blight occurred in the neighbourhood last year’ and follow the 2nd map on the webpage. Once the orchard has been assigned to one of the categories above, locate the region of the orchard on the fire blight risk prediction maps and follow the animated maps for the predicted fire blight risk corresponding to the dates on the map. The animated maps will change through the changing risks over the seven day forecast, so watch them carefully. A brief interpretation of the risk will be posted above the maps for each update.

Interpretation of Risk: The following risks (Legend) are colour coded on the maps and designated as follows: