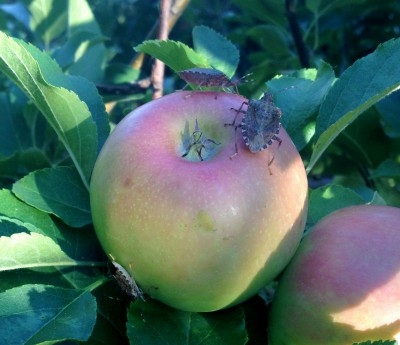 February 20, 2018, East Lansing, MI – This article provides a brief summary of some of the research being produced by some of the institutions participating in a project titled “Management of Brown Marmorated Stink Bug in U.S. Specialty Crops” funded by the United States Department of Agriculture (USDA) and National Institute of Food and Agriculture (NIFA). It is not a detailed summary of all the work being conducted within this project, but provides highlights from areas of the project that may be of interest to growers.

The information required to detect the movement and relative numbers comes from trapping. A great deal of effort has gone into finding the most effective trap and lure. A variety of trap styles exist, but the pyramid trap baited with an attractant lure has been the standard way to detect brown marmorated stink bugs. Lures continue to be improved and the current standard is a two-part lure comprised of an aggregation pheromone and an attractant from a related stink bug.

The pyramid trap was improved by replacing the dichlorvos strip killing agent with a piece of pyrethroid-impregnated netting. The pyrethroid in this case is deltamethrin. The netting is similar to mosquito netting used in malaria prevention programs and is commonly referred to as long-lasting insecticide netting. The benefits are that it lasts for the entire trapping season and is much safer to handle due to its low mammalian toxicity. Long-lasting insecticide netting also shows promise as a means of trapping brown marmorated stink bugs.

The most promising biological control agent continues to be a wasp parasitoid (parasites do not kill their host, but parasitoids do kill them) known as the samurai wasp, Trissolcus japonicas. This tiny wasp puts its own eggs into the stink bug’s eggs, and the developing wasp larvae use the stink bug egg for food until they emerge. In Asia, where brown marmorated stink bug originally came from, 60 to 90 percent of the eggs are parasitized by this wasp. Researchers in the U.S. have determined that the wasp highly prefers brown marmorated stink bug eggs over one of our native stink bugs eggs, spined soldier bug, so they should have little-to-no impact on them.

The USDA has yet to approve the general release of these wasps, but it is under review and could potentially happen at any time. Interestingly, like brown marmorated stink bugs, this wasp has been transported across the ocean. To date, populations have been detected in some Mid-Atlantic states and the Pacific Northwest and are slowly spreading on their own. However, if permission would be given by the USDA, they could be mass-reared and released where they would produce the greatest benefit.

Another area of interest is looking for ways to protect natural enemies from the negative effects of control procedures used against brown marmorated stink bugs. By carefully managing insecticide use, natural enemies may be preserved. One way to manage insecticide use is by establishing threshold levels for the pest. Determining an accurate threshold level requires testing over several years and in many orchard environments.

Insecticide assays in North Carolina showed that out of four Organic Materials Review Institute (OMRI)-approved materials – Entrust, Neemix, Pyganic, Azera – Entrust was the most harmful to two native parasitoid wasp species, even when exposed to 0.1-times the field rate. However, when exposed to residues of sugar-laced pesticides, only the lowest rate of Neemix had no impact.

In an Oregon study, more than half of the wasps exposed to dry residues of Actara, Asana or Admire Pro died within an hour of exposure. After 24 hours, mortality was greater than 75 per cent for those materials and for Entrust and Exirel, but not for Altacor.

A promising management tactic is attract-and-kill using pheromone-baited perimeter trees that receive either a regular insecticide application or have long-lasting insecticide netting within the canopy. Seven- and 14-day spray intervals using attract-and-kill or perimeter sprays were compared to 10 adults per trap (cumulative) threshold sprays of two alternate row middle applications and to a control. If the cumulative threshold level was met in the attract-and-kill or in the threshold spray plots, it also triggered two consecutive alternate row middle sprays.

Fruit injury was significantly reduced in the apple blocks using the perimeter sprays on seven- or 14-day intervals in the blocks using attract-and-kill with sprays at seven- and 14-day intervals or with long-lasting insecticide netting, and in blocks treated after reaching threshold levels of brown marmorated stink bugs, compared to the grower standard. This suggests perimeter sprays are an effective management tactic to employ against brown marmorated stink bugs.

Long-lasting insecticide netting placed in attract-and-kill trees in a vertical orientation killed more brown marmorated stink bugs than when the fabric was oriented horizontally. The level of injury to peaches and apples under grower standard programs was similar to the injury found when just orchard perimeters consisting of the exterior row plus one row toward the interior were sprayed. This did not hold for peaches if the orchard was 10 acres or more in size.

Another use of long-lasting insecticide netting is to drape a 5-foot by 5-foot section of it over a pole or fence and attach an attractant to the netting. Several of these are placed on the orchard perimeter between woods and the orchard. Brown marmorated stink bugs attracted to the lure come into contact with the pesticide in the netting and die. This may allow for interception of the adults before they enter the orchard resulting in less fruit damage.

Multi-state research efforts allow researchers to quickly acquire information that would take individual states or regions many years by themselves. Most of these experiments will be repeated in 2018 and new ones will be added as we continue to grow the knowledge base that allows us to successfully meet the challenges that brown marmorated stink bugs bring to the tree fruit industry.