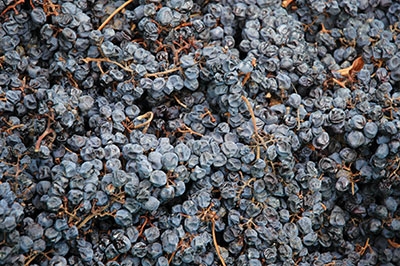 A close up of the dried-up grapes produced during the kiln drying process. Courtesy of Reif Estate Winery.

Gourmet Ontario raisins – who would have thought?

This unusual story officially starts in 2008, but the origins go back another two decades. It began in 1986, when Klaus Reif and his staff at Reif Estate Winery in Niagara started working with the National Research Council of Canada (NRC) on improved development of ice wine, low sulphite wines and optimal bottle closure options.

“In 2008, we had a general meeting with the NRC at our winery to discuss possible new projects and the availability of surplus tobacco kilns came up,” Reif explains. “We discussed how they might be used.”

By 2009, Reif had purchased two kilns from former tobacco farms in southwestern Ontario for the purpose of making appassimento-style wine (which involves outdoor grape drying to concentrate the fruit). This would serve to compliment and expand Reif Estates’ offerings.

“In terms of the raisins, that same year, a neighbouring farmer came by and asked if we had a need or use for a tonne of his surplus Sovereign Coronation grapes,” says Reif, “which he had not been able to sell to supermarkets.”

Reif Naturals Kiln Haus gourmet and preservative-free raisins were the eventual result. They now come in milk chocolate, dark chocolate and chocolate-cinnamon varieties. Making and marketing these premium products also means that the winery can also support an extra two to three employees every season. In 2013, the company produced five tonnes of raisins.

Fitting with the local food craze that has swept the nation, the sweet treats have garnered a lot of attention, starring in articles in Maclean’s, Food and Drink Magazine and many other publications. Director of operations Wade Ruddle says the packaging highlights the local aspects of the product.

Historic winemaking tradition
The history of the Reif family has long been intertwined with grapes. Members of the family have been in the winemaking business for nearly 500 years over twelve generations. They originate from (and still have strong ties in) the small town of Neustadt, Germany, in the Rhine River Valley. In 1977, Ewald Reif decided to immigrate to Canada. He purchased land along the Niagara River and began uprooting the existing grape vines native to Ontario, replacing them with premium vinifera varieties such as Riesling, Chardonnay and Cabernet Sauvignon. Ewald was a pioneer in the Niagara wine industry in his planting of the finest Vitis vinifera varietals alongside French hybrids. He gradually expanded the acreage of his vineyard, eventually growing it into a 125-acre farm.

Back in 1978, his brother and his nephew Klaus visited.

“During that summer trip, I fell in love with the beauty of the region, and soon after I decided to embark on a career in winemaking,” Klaus explains.

The following year, he enrolled in business school in Germany and later worked at a government research winery. In 1984 (the year after Ewald had officially opened Reif Estate Winery), Klaus was accepted into one of Germany’s most prestigious winemaking schools, the Geisenheim Institute. Armed with degrees in viticulture and oenology, Klaus immigrated to Canada, purchasing the winery from his uncle in 1987. In 1990, University of Guelph microbiology graduate Roberto DiDomenico joined the team as master winemaker. Reif and DiDomenico still focus on creating small batches of exceptional wine, letting nature lead and using traditional techniques, but also employing innovative technologies.

“When the farmer with the excess grapes came by in 2009, he asked Roberto and I what we might be able to do with them, and I said to bring some by and we can throw some in the kilns and see what comes of it,” Reif explains.

It took a couple years of testing and trying different techniques to get things right, and it was confirmed again and again that the delicious sweet seedless Sovereign Coronation grapes were the best.

“We’ve refined the drying process in terms of finding the correct combination of humidity, air circulation and temperature, and so by far the greatest challenge these days is our supply of grapes,” Reif explains. “At the moment, the Sovereign Coronation variety is in the stages of being an endangered species in Ontario. Imports are becoming the main source for many retail chains, and Ontario growers are looking to replace this variety with others.”

In addition to the wine and gourmet raisins, Reif Estate Winery is also involved in agritourism. They offer a Legacy Tour and Tasting, Sensory Garden Exploration, plus a Artisan Wine and Cheese Experience and other delicious options during the warmer months. Again this year, they held Days of Wine & Chocolate on weekends throughout February, an exploration of the art of pairing wine with chocolate-infused dishes. Other initiatives include private tours, intimate cellar dinners pairing regional cuisine with estate wines, and winery weddings. They also offer both a membership and a rewards program.

As far back as 1987, the winery’s Vidal Icewine was named by renowned wine critic Robert Parker Jr. as one of the year’s top 10. In all, Reif’s Icewines have received more than 100 Gold Awards. In 2009, Reif received a grant and award as a Canadian Innovative Leader from the National Research Council of Canada for demonstrating specific advances in research and development within its industrial sector and linking scientific research to commercialization, jobs, and economic growth. The winery received $194,600 to support improved ice wine filtration, developing production methods for new products, and research into new techniques for improving the wine production process.

In 2013 came the Premier’s Innovation Award for Kiln Haus Raisins.

“Recognition for the hard work and investment into the project is, of course, always valued and appreciated,” Klaus says.

When asked for his views on of the importance of innovation in Canadian agri-food and thinking outside the box, he says: “It’s very important. Innovation not only keeps us current in the marketplace, but helps us defray the high production costs in Canada by creating great niche market high-value products.

“The chocolate-covered raisins in particular have been a great success, as many consumer prefer them to naked,” Klaus adds.

Keep your eyes peeled for the next innovative delicious Reif treat – all-natural wine gummies made with the estate’s VQA (Vitner’s Quality Alliance) wines.