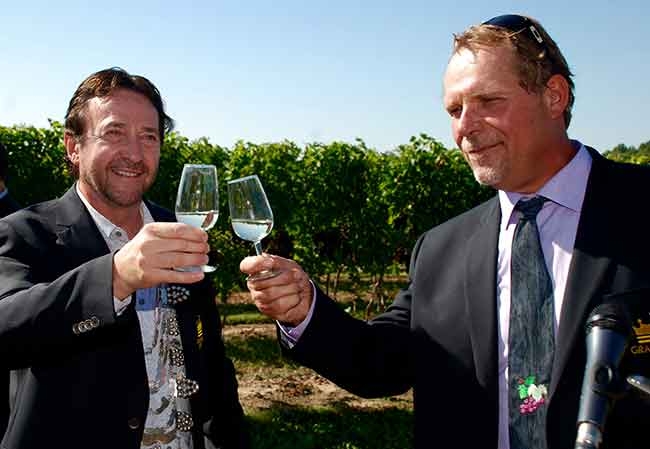 Jamie Slingerland grows grapes and does it well – so much so that he was named the 2015/2016 Niagara Wine Festival’s 60th grape king.

He’s also on the cutting edge of introducing new clones and growing techniques, a winery fieldman who advises other growers on best growing practices, and knows an awful lot about marketing wine, the finished product.

Taken altogether, Jamie’s well-rounded resume impressed a panel of judges – all industry academics – who selected him from a handful of growers who were nominated by some 500 fellow Grape Growers of Ontario (GGO) members.

At his coronation, Jamie made reference to the first few rows of grapes in the vineyard beside him. They are the first commercial vineyard of Corvina grapes grown in Canada, as well as a few Rondinella and Molinara varieties that are all native to Italy. Grafted on the right rootstock, Corvina has proven to be as winter hardly as Cabernet Sauvignon, which is a workhorse red variety grown in Niagara. Even though last winter was the second cold winter in a row, only 76 out of 40,000 vines in the entire vineyard of many different varieties had to be re-planted, he said proudly.

“I credit this to vine health, not over-cropping, planting the right varieties, a great (growing) location, wind machines and timing (their use) right,” he says.

He believes these things earned him points in three of nine judging categories – overall quality of the vineyard, outreach in the grower community, and the all-encompassing miscellaneous category, which has lately been the best use of wind machines. The other six categories are growing a variety of different grape cultures, controlling diseases, insects, and weeds; soil management, and grape canopy management.

His personal project over the past five years has been appassimento – drying grapes to intensify flavour before fermentation. It’s a premium product that demands a higher price, which is good for wineries. On that note, he invited those at his coronation to try newly released 2012 Pillitteri Cabernet Franc Appassimento.

Jamie is the man in the vineyard for Pillitteri Estates Winery in Niagara-on-the-Lake. As director of viticulture, he oversees 14 different grape cultivars grown on five farms totalling 120 acres.  As well, he buys grapes from other growers for the winery, best-known for introducing Canadian icewine to China. Even after some 18 years, it’s now the winery’s main sales market.

“We made China a market when no one else was there and now sell 60 per cent of Canadian bottled wine and 80 per cent of that is icewine, mostly red,” he says.

It’s a big and growing market to be tapped.

“If even five per cent of the people in China bought a bottle of icewine, it would take us 30 to 40 years to produce that much.”

The appeal of icewine has not gone unnoticed by Chinese investors who have bought a handful of Ontario’s more than 100 wineries as well as family farm vineyards in the last five years. It’s not unlike when the Americans and British bought into the Bordeaux region in France, he says philosophically. But, in this case, it’s a way for business people to get their money out of China that is now going through the growing pains of establishing a capitalist economy and what has lately been a fragile stock market.

Ontario’s 43 farmer’s markets are another sales arena the winery got into two years ago when the sale of wine was allowed as a pilot project by the provincial government. Now, legislation has been proposed to put beer and wine on grocery store shelves and that promises to be another lucrative sales market for Pillitteri wines that are seen less and less on LCBO (Liquor Control Board of Ontario) shelves.

“Last year, our LCBO sales were six per cent. This year, it will be three per cent, and next year close to zero per cent,” Jamie says. “It’s a big box entity not fit for a smaller winery
like Pillitteri.”

Besides, he believes it makes sense to gravitate to the lowest tax bracket as the profit margin is a lot less selling through the LCBO, where tax is 65 per cent on a bottle of wine compared to just 17 per cent at the winery door, or through direct delivery.

Jamie’s agricultural and ancestral roots run deep in Niagara – almost 230 years – back to the American Revolution. The Slingerland family backed the losing British in the American Revolution and lost some 10,000 acres in New York State near Albany. His ancestors came to Niagara in 1783 and fought with the local Butler’s Rangers militia. In recognition for service to the Crown they were granted 120 acres in Niagara. Over the generations, they grew tender fruit, mostly peaches, and some grapes. His grandfather was the farm manager for Larking Farms, which once owned about 1,000 acres in Niagara, growing mainly peaches.

At one time, Jamie also thought of becoming a farm manager. But he settled on a career with the Ontario ministry of agriculture, as did his brother, Ken, who for many years was a grape and tender fruit extension specialist with the province’s Ministry of Agriculture, Food, and Rural Affairs (OMAFRA) at Vineland Station. Ken was also a long-time judge in the selection of the grape king.

Jamie served as a fruit and vegetable inspector in Leamington and then Sudbury. He was on a career path that would have taken him to a office job in Toronto. But along the way he met and married Connie Pillitteri, the daughter of winery owner Gary Pillitteri, who Jamie credits with teaching him how to grow grapes.

And, even though at first the young couple didn’t want to farm – Connie had a senior position at a bank branch – they decided to give it a go 30 years ago when Jamie was 27 and had been with OMAFRA for five years. They bought a 20-acre farm in Niagara in 1985. A year later, a severe hailstorm cut a 12-km path through Niagara and they lost not only the financial equity they had in the farm, but also an additional 15 per cent.

They were able to recover financially by severing a lot for housing before that door was closed through municipal legislation and they bought a second farm. There was another hail storm six years later but that time their losses were cut in half and they were able to keep financial afloat with Connie’s salary, Jamie recalls.

When they were offered an amount of money that was way over local real estate market value – “an offer that couldn’t be refused” – the couple moved to a five-acre grape farm.

Jamie credits his father-in-law for the practical knowledge he has gained over 22 years. Gary Pillitteri, now 79 and the 1981 grape king, was first elected Niagara Falls (Lib.) MP in 1993 and entrusted the growing of grapes to his son-in-law while he served

10 years in Ottawa. Jamie thanks him and his mother-in-law, Lena, for the opportunity to help grow a business that’s become the largest family-owned winery in Ontario, providing a livelihood for eight family members.