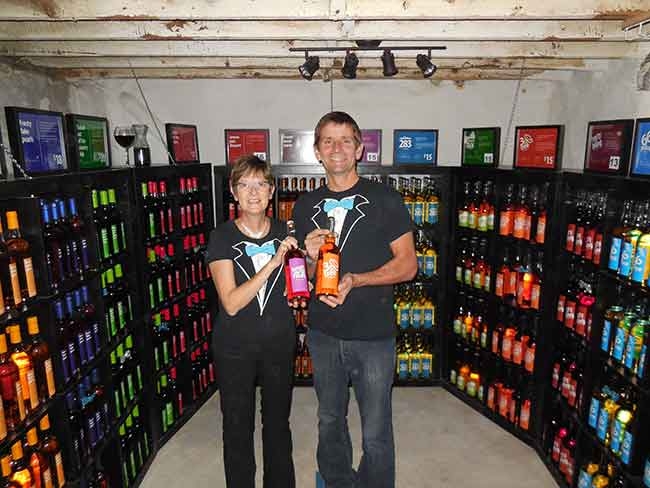 Gary and Diane Fischer sell almost all their product at the farm gate. They want to be unique, drive people to the farm and have the customer interaction. Contributed

At Hoity Toity Cellars, innovation and experimentation are a way of life for Gary and Diane Fischer. This probably explains why they’ve won three regional Premier’s Award for Agri-Food Innovation Excellence. Not surprisingly, all of the awards are connected, each leading to the next.

The story begins with the Fischers purchasing their 86-acre farm in 1983, creating a pick-your-own operation with strawberries and raspberries, plus farm gate and farmer’s market sales. But in 2007, the berries were removed. The Fischers were ready to realize their dream of entering the wine industry.

The couple planted 25 acres of grapes and have never looked back. They also have two acres of apple trees, and two of lavender, with the rest of their acreage supporting a rotation of field crops. Diane is the general manager and taster, while Gary is the grower, crafts the wine/cider and helps with sales.

“We do a ton of tours,” says Gary. “We really see ourselves as farmers first, who just happen to be making alcoholic products.”

The road to this success came with hard work. Producing grapes in Mildmay, Ont., within Bruce County isn’t easy. The location is at the northern edge of where grapes can be cultivated in Ontario.

“The vines usually survive the winters okay,” Gary explains. “It’s the summers that are actually the clincher. Sometimes there’s just not enough heat and sunshine to get the ripening we need.”

That’s why the Fischers grow more grapes than required for their wine volume target. For all the tweaking, research and hard work that went into making the cultivation of grape vines possible in their region, they received their first Premier’s Award.

About three years ago, Gary began experimenting with making cider. Technically, he says, there is no difference between cider and wine, which are made with the same equipment, controlled temperatures and yeast.

“There is a big difference in how they are consumed,” he notes. “Cider is lower in alcohol, usually between four and seven per cent, and it’s a refreshing drink that’s served in a larger-volume glass, whereas wine is sipped and often paired with food. Cider is served ice cold and usually carbonated, and you can make it from any fruit juice in a few weeks.”

The Fischers had apples for cider, but wanted to see if they could make it using other local fruit.

“There’s a fair amount of pear production in Bruce and Grey counties, so pears were a natural choice,” Gary explains.

The third award came from the reality of growing grapes at their northern limit. If there’s a cool summer, only some of the grapes fully ripen. That was the case in 2013, when 55 per cent of the Hoity Toity grapes met wine standards.

“We decided that when we don’t get all of the grapes to fully ripen, we’ll pick them and freeze them and make something else besides wine,” Gary explains. “These un-ripened grapes still taste great and have some sugars, and they are ideal for making into cider.”

“The syrup comes out first and the ice remains, and it’s the concentrated syrup that we use,” he explains. “Freezing reduces the acidity, which naturally happens on the vine, bush or tree as a fruit ripens and the sugars rise, and acidity is important in whatever you’re making. We’ve found unique ways of controlling the acids and the sugars and getting interesting flavours.”

Almost all sales are at the farm gate, the way the Fischers want it.

“We want to be unique and drive people to the farm,” Gary says. “We want the customer interaction.”

He believes the biggest lesson they’ve learned in making and marketing cider is being true to their vision.

“Stick to your niche. We are very quality conscious. The blending and tasting and tweaking is very important, but to do that, you need good quality up front.”