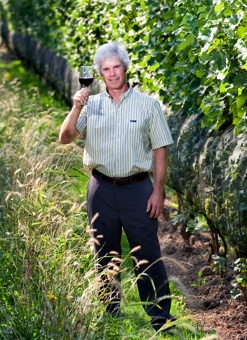 2011 Grape King crowned
RBC Royal Bank, the Grape Growers of Ontario and the Niagara
Grape and Wine Festival recently announced that Ed Hughes of Hughes Vineyards
in Beamsville has been named the 2011 Grape King.


September 22, 2011, St.
Catharines, Ont – RBC Royal Bank, the Grape Growers of Ontario and the Niagara
Grape and Wine Festival recently announced that Ed Hughes of Hughes Vineyards
in Beamsville has been named the 2011 Grape King.

“We are thrilled to have
Ed serve as the 2011 Grape King and act as an ambassador for grape growers and
grape growing in Ontario,” said Grape Growers of Ontario chair Bill George Jr.
“Ed is a dedicated grower who is concerned with the sustainability of Ontario’s
vineyards and has implemented several bio-controls at his Beamsville
operation.”

Ed Hughes interest in
grape growing began in the early 1990s when, as a cook at the Four Seasons Inn
on the Park, he attended a Sommelier course to study food and wine
affiliations. In 1993, Ed purchased a three-acre farm in Beamsville and began
growing grapes there in 1995. In 1999, Ed expanded his operation by purchasing
a well-established 21-acre vineyard that was planted with a combination of
hybrid and concord grapes. Today, Ed farms more than 20 acres of VQA premium
quality vinifera grapes. He sells exclusively to Malivoire Wine Co. in
Beamsville and has also developed a business selling high quality grapes to
amateur wine makers and a number of wine clubs in Southern Ontario.

As Ed’s interest in
viticulture continued to grow, he enrolled in Brock University’s Cool Climate
Oenology and Viticulture Institute program to learn how to improve the grape
quality in his vineyard, with the hopes of starting a small family winery. Over
the last 10 years, Ed has started to implement bio-controls in his vineyard and
has investigated new ways to improve the sustainability of the vineyard,
including developing a more natural ecosystem and experimenting with high
density planting. In 2010, Ed was awarded the Premier’s Award for Agri-Food
Innovation Excellence for his innovative work in the vineyard. Ed lives with
his wife, Caroline, and their two children in Beamsville, Ont.