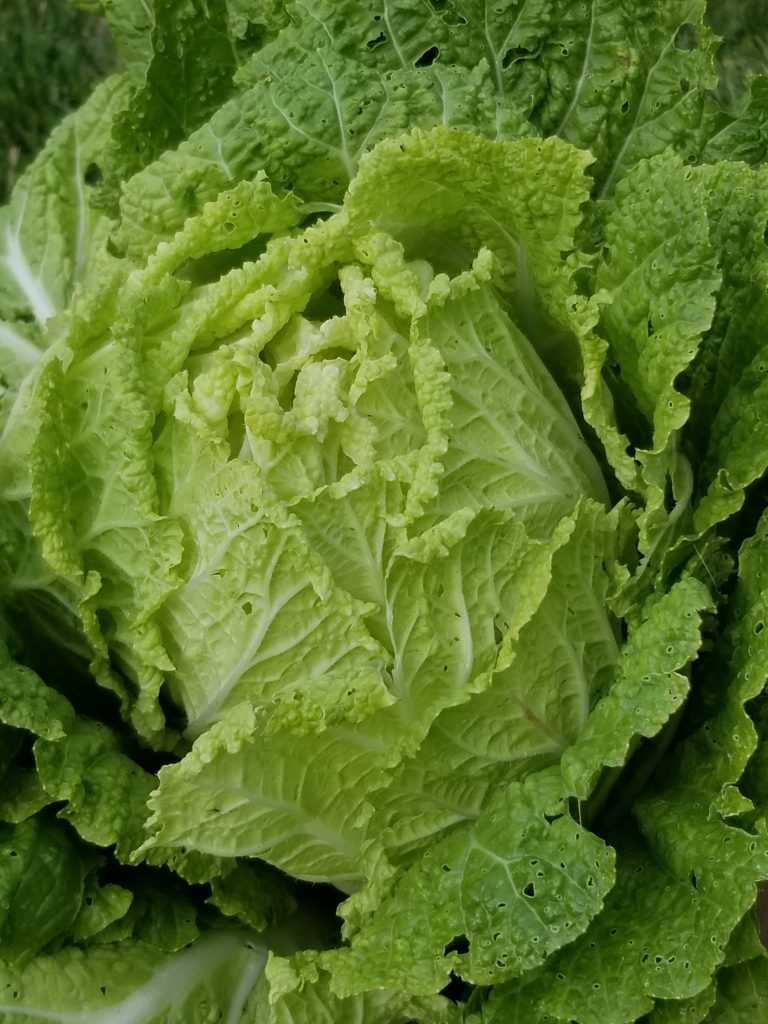 Climate change is one of the most pressing issues of our generation. Although the agricultural industry stands to suffer from the extreme weather caused by the climate crisis, opinions on the topic within the farming community vary wildly. As such, the Organic Council of Ontario (OCO) conducted a survey to better understand Ontario farmers’ perspectives on climate change and  environmentally friendly farming practices. The survey was shared with the members of a number of Ontario agricultural organizations, including OCO, Ecological Farmers Association of Ontario (EFAO), National Farmers Union Ontario (NFU-O), Ontario Federation of Agriculture (OFA), Christian Farmers Federation of Ontario (CFFO), Farms at Work and Pfenning’s Organic Farm producers.

One-hundred farm owners and or managers from across Ontario responded to the survey. Respondents represented a range of production types, evenly distributed between livestock, fruits and/or vegetables, and grains and field crops, with some niche industries such as orchard fruit, greenhouse vegetables and honey and flowers. Forty per cent of respondents were certified organic or in transition. An additional 20 per cent were not certified but followed the Canadian Organic Standards. The remaining 40 per cent of respondents did not identify as organic producers.

The results of the survey

Almost three-quarters (73.96 per cent) of respondents were concerned or very concerned about the impacts of climate change on their business. The top-cited impacts already experienced were drought (51.16 per cent), crop damage or loss (46.51 per cent), invasive species (36.05 per cent), and flood (25.58 per cent). Climate change is expected to increase the frequency and severity of extreme weather events and it is very telling that farmers are already experiencing these adverse effects. To mitigate and adapt to the growing threat of climate change, the vast majority of respondents are employing one or more environmentally beneficial practices, with only 3.13 per cent of respondents indicating that they do not employ any of the practices listed. 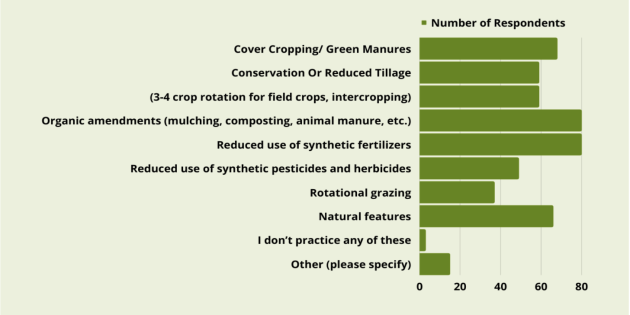 OCO conducted a cross-reference analysis of production type and practices used to account for the fact that not all environmentally friendly practices can be paired with all types of agriculture. When considering the use of rotational grazing among livestock producers, the percentage of respondents using this practice increases to 70 per cent. All four greenhouse producers, all 15 mixed-production farms and 97.5 per cent (39 of 40) of fruit and/or vegetable producers reported using organic amendments in their systems. Following a similar pattern, the top production types implementing cover cropping were greenhouse at 100 per cent, mixed production farms at 86.7 per cent and fruits and/or vegetables at 82.5 per cent. Orchard fruit producers were the most likely to use natural features in their systems at 87.5 per cent, followed by livestock producers at 80.5 per cent. Grain and field crop producers were the least likely to use natural features at 64.1 per cent.

Within the farming community, not everyone has felt the impacts of climate change; a small portion of respondents have not felt threatened by climate change. Those that stated they were not concerned about climate change listed the following reasons for their lack of alarm:

However, farming practices that are good for the environment have many additional benefits beyond addressing today’s climate issues. These benefits can include improving soil and water quality, supporting biodiversity and increasing profitability compared to conventional agricultural systems. So, there are many reasons for farmers to take up climate-friendly practices, even if they are not concerned about today’s climate issues.

Almost 40 per cent of respondents indicated that they have not experienced any barriers to fully implementing these practices. A similar proportion (35.16 per cent) cited weed management as a barrier, followed by the increase in labour and expenses required. A smaller proportion (18.68 per cent) cited training on how to implement these practices as a barrier. When asked what would motivate further adoption of these practices, the majority of respondents reported that they would be motivated to integrate environmentally beneficial practices into their businesses through government subsidies (60 per cent) and an improvement in crop quality (60 per cent).

Some respondents built on the idea of government subsidies, suggesting recognition – in the form of payment or incentives for ecological goods and services that environmentally beneficial practices provide – would encourage them to make a change. Better training resources were also cited as a motivator for almost 40 per cent of respondents. Overall, it would appear that greater financial and mentorship resources are needed to motivate farmers to integrate climate friendly practices into the systems.

There are currently a number of programs already offering support to encourage on-farm climate action. Of the Ontario programs available, the Ontario Soil and Crop Improvement Association: Environmental Farm Plan Workshop is the most well-known (78.67 per cent), followed by Canadian Organic Growers: Growing Eastern Ontario Organically (61.33 per cent). Certified organic and self-identified organic but not certified producers were more likely to be aware of the different organizations and programs that offer climate support to farmers in Ontario than non-organic producers. This demonstrates that there is potential for greater uptake of these supports by raising awareness of their availability throughout Ontario’s agricultural sector.

At the Organic Council of Ontario, we strive to provide farmers in Ontario with accurate and science-based data on organic farming practices. Most recently, we ran our Organic Climate Solutions campaign, which provides farmers with the tools they need to lower their farm’s environmental footprint. For more information, you can check out https://www.organiccouncil.ca/organic-climate-solution/.