Features Environment
How CSA farmers are coping with climate change 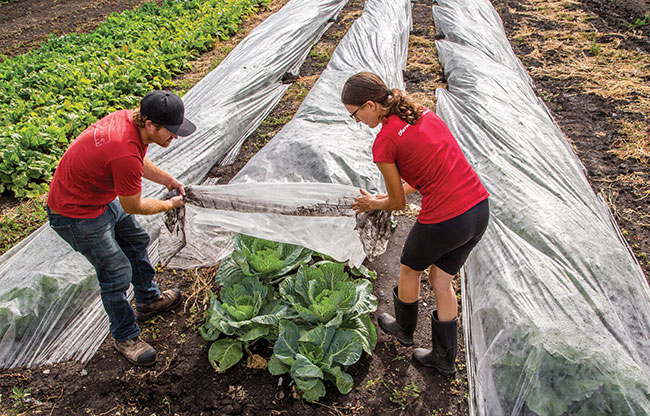 Row covers are one way to manage pests that are showing up earlier and thriving in the warmer temperatures. Photo courtesy of Sandy Black.

For Canadian CSA (community-supported agriculture) farmers like Jenkins, unpredictable weather events that were once an intermittent occurrence are now an ever-present threat. “It’s normal for weather to change every day, but the changes in long-term patterns we’re experiencing are not normal,” says Laurie Beyranevand, professor and director of the Center for Agriculture and Food Systems at Vermont Law School.

While many people may not feel the direct impacts of these changes, farmers are able to observe the fluctuations in weather firsthand, Beyranevand adds. As weather events become increasingly intense and frequent, farmers face a host of challenges as they work to serve their local communities. Some of the biggest challenges, Beyranevand says, have to do with warming temperatures, drought (and, conversely, flooding), and the proliferation of pests. Add to that the unpredictability of it all, and there’s no doubt that farming in the era of climate change takes a heavy mental toll.

Coping with rising temperatures
In Canada, most farmers, regardless of the province in which they reside,

have to deal with big swings in temperature from season to season. Even those farming in pleasant climes, like the West Coast, must contend with snow and cold weather at some point during the year. Still, from B.C. to P.E.I., farmers are increasingly experiencing the effects of rising temperatures. Random heat spells make it difficult for farmers, particularly those with CSA models, to plan crops and work efficiently in the fields, Beyranevand says.

Frequent bouts of intense heat have caused Mark Cormier – whose certified organic CSA, Glorious Organics, is located in Aldergrove, B.C. – to adapt his planting schedule. He avoids planting certain early crops because of a higher risk of bolting during early April heatwaves. While the hot weather poses a threat to specific crops, he adds that the diversity inherent to the CSA model is a plan in and of itself. If something happens to one crop, there’s another to fall back on. Cormier also builds expectations of failure into his plan every year.

More isn’t necessarily better, though. Getting too diverse, he warns, can backfire and cause burnout. Having too many different crops also makes it challenging to practice crop rotation. Because of heat and unpredictable weather, Louis Ménard of La Ferme Trotteuse Co-op in Sainte-Marie-de-Blandford, Que., says that he tends to schedule more backup plantings, which can sometimes cost more money, and, at the very least, may require more labor.

Obstacles thriving in the heat
Additionally, many pests thrive in warmer weather, Beyranevand explains. Cormier says that while cabbage moth has always been an issue on his farm, the pest has become more problematic in recent years. It turns up earlier and earlier, making it difficult to control even with row covers. “We don’t grow a lot of those crops because they’re just really intensive to manage for us, and row covers suck,” Jenkins admits with a laugh, adding that they tend to focus on what they believe they can do well. If something is a magnet for pests, it’s unlikely they’ll grow it.

Cormier also notes increased instances of disease in the last decade that he attributes to the weather. His onion crop, a crop that typically nets around $10,000 a season, was wiped out one year because of mould growth – something he says other farmers in the area have had to contend with as well. An indirect challenge of increased instances of pests and disease – and all climate-related challenges that require additional spending to address – is the difficulty in translating the struggle to the customer. Every year there’s a new bug that can survive further north because of the warmer temperatures, Ménard says. People don’t necessarily understand why something is more expensive, he explains. When crops fail because of pests or other issues, customers don’t always grasp why they’re missing something from their basket or paying more for their farm share because they don’t experience these obstacles firsthand.

In 2020, Teri Jenkins and her family found themselves contending with unexpected flooding when nearby upper river sites failed, and water rushed into the man-made reservoir in Brandon, Man. Photo courtesy of Teri Jenkins.

Beyranevand says many farmers are already facing increased flooding and increased droughts due to drier summers and wetter winters and springs. Photo courtesy of Teri Jenkins.

Dry like the desert
“In Canada, many farmers are already facing increased flooding and increased droughts due to drier summers and wetter winters and springs,” Beyranevand says. Coupled with unrelenting heat, drought poses an incredible challenge for all farmers, particularly small farms that may not have the infrastructure or budget to meet increasing water demands. Intermittent flooding and drought conditions also make it increasingly difficult to grow plants without high amounts of intervention.

About six or seven years ago, Cormier says his farm went through a period of massive drought. The drought, along with skyrocketing temperatures, was the catalyst for investing in drip tape. Cormier adds that relying on drip tape has its downsides: it’s difficult to use, requires labor to move around, and is made of plastic that ultimately ends up in landfills. He’s conscious that some solutions to climate change’s effects may have their own environmental impacts and worries about how farms like Glorious Organics will fare with upcoming plastic-free legislation in B.C.

The toll of uncertainty
When the weather behaves in a slingshot-manner, it’s difficult for farmers to plan ahead. Ménard says his answer to uncertainty is to invest fewer dollars into farm operations. He’s less likely to take big financial swings nowadays because of the increased risks related to climate change. Some farmers note that weather changes, like warmer springs and autumns, occasionally offer an opportunity to grow things they’ve never grown before, like sweet potatoes. However, this silver-lining is hard to appreciate because of planning difficulties.

Leslie Moskovits of Cedar Down Farm in Neustadt, Ont., explains that starting earlier isn’t necessarily possible in her neck of the woods. Even when the spring weather is dryer and more hospitable to specific crops, the snow often still lingers on the ground. Her strategy involves paying closer attention to patterns and taking copious notes to better cope in following years. Cormier concedes that every season is different, and predicting the weather is challenging. In a profession where planning is part of the deal, he admits that plans are constantly changing. Like Moskovits, he monitors the weather, but it’s not always a foolproof strategy. He believes it’ll only get tougher to work with the weather.

The unpredictability of the weather puts a strain on crops but also on mental health. Jenkins admits that farming is stressful and both physically and mentally demanding. However, being able to grow food tempers her worries for the future. “I would be afraid if I didn’t have my hands in the food that I grow,” she says. Cormier admits that witnessing and experiencing the effects of climate change has been a struggle but adds that if he were doing anything else, his mental health would likely suffer even more. For Cormier, the winter is the hardest, but spring is a time of renewal and hope.

CSA farmers can’t hack it alone
Many CSA farmers have found ways to adapt to the challenges thrown their way by Mother Nature. However, as the desire for local food grows, spurred on partially by the pandemic, some farmers remark that it’s impossible to meet the growing demand alone.  “Not all farms with CSAs are created equal,” Beyranevand says. Despite this, she adds that research shows that CSA farms are usually smaller and helmed by younger-than-average farmers. “Studies suggest that they’re also more likely to trend organic or biodynamic,” Beyranevand says.

But while these smaller farms are more likely to employ earth-friendly practices, they’re also more likely to be left behind in terms of access to government programs. Financially, they’re also unlikely to have long-term relationships with banks allowing them to access lines of credit for equipment and adaptations to combat heat, drought and increasing pest activity. Jenkins says that as a CSA, she largely feels ignored by the government; “We’re not fitting into the agriculture box that they’re trying to put us in.” For Moskovits, the issue of access to resources is paramount. “I think more people are interested in providing for themselves and their communities and that we have a system that makes it very difficult for people to do that,” she adds.

Beyranevand suggests that governments should look to these small farms as conservators of land and ecosystems and support them for their work contributing to climate change resilience via a “Payment for Ecosystem Services” program. In turn, this would encourage farms not doing so to move towards sustainable, climate change-combatting practices like crop rotation and integrated pest management. Beyranevand, who contributed to the research that helped form Canada’s National Food Policy, is adamant that governments need to approach climate and agriculture issues in a unified manner. “Agriculture contributes to climate change, but it also has the potential to mitigate it,” she explains.

Moskovits is hesitantly hopeful about the future of her chosen profession. She does her best to farm in a way that mitigates climate change and strongly believes in the resiliency of CSA and organic farming. Despite the challenges they face, Moskovits, Ménard, Cormier, and Jenkins are all committed to moving forward in a way that serves to combat climate change rather than simply withstand it.