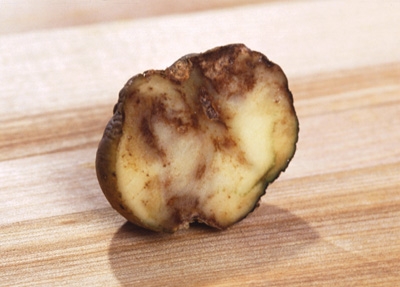 Peters says the key to a successful fungicide program to prevent an outbreak of late blight is to start early with protectant products and ensure complete coverage.  Myron Love

Over the past two growing seasons, there have been dramatic changes in the strains of the late blight pathogens that Canadian potato growers have had to contend with.

“In recent years, the most common strain of the late blight pathogen  (Phytophthora infestans) in Canada has been the US8, A2 strain,” says Rick Peters, a research scientist with Agriculture and Agri-Food Canada. “In 2010, while A2 was still dominant in eastern Canada, 80 per cent of the samples from western Canada contained US-23 and US-24 strains, which are of the A1 mating type. And this past season, US-23 and 24 dominated in New Brunswick as well. In 2011, US-23 was also found in British Columbia, but US-24 predominated in Alberta and Manitoba. Another new strain, US-22 was commonly found on tomatoes in Ontario. In Prince Edward Island, US-8 was still the main strain causing disease in 2011.”

Peters, who is based at AAFC’s Charlottetown, P.E.I., office, began his presentation at the 2012 Manitoba Potato Production Days conference in Brandon, Man., with an overview of a newly established national Late Blight Working Group, of which he is a member. The loose organization is a Canadian monitoring network of scientists, including Khalil Al-Mughrabi, a provincial research scientist at the Potato Development Centre in Wicklow, N.B.; Larry Kawchuk from Lethbridge, Alta.; Fouad Daayf from the University of Manitoba; Ken Conn and Katherine Dobinson from London, Ont., plus Peters. The group’s goal is to identify early outbreaks of late blight and track the strains causing disease across the country.

Samples are sent to AAFC research facilities for analysis in London, Ont., Lethbridge, Alta., and Charlottetown, P.E.I.
Late blight usually shows up in cooler, wetter seasons, Peters explains. The spores are spread by wind and rain.

Peters spoke of the role of volunteer potatoes in spreading late blight.

He recommends destroying volunteer potatoes and avoid planting in fields with a lot of volunteers as measures growers can take to reduce the risk of having crops infected with late blight. He also suggested disposing of cull potatoes before mid-June.

In choosing sites to plant the crop, he advises considering areas with good drainage and air flow.

“Crop scouting is very important in the early detection of late blight,” he says. “Among the host plants – in addition to potatoes – are tomatoes, peppers, eggplant, petunias and some weeds.”

He notes that Russet Burbank and Shepody, the most common potato processing cultivars, are also susceptible to late blight. Dorita is one variety that is quite resistant.

Peters says the key to a successful fungicide program to prevent an outbreak of late blight is to start early with protectant products and ensure complete coverage. He recommends the use of specialty fungicides when disease risk is high in addition to a backbone program of protectants such as Bravo or Manzate.

“Phosphorus acid-based products, such as Confine, are also effective,” he notes. “The product moves easily in the plant, stimulates the plant to activate its own defenses and poses a low environmental risk.

“We are also working with Phostrol, which is another phosphorous acid-based product being considered for licensing in Canada.”

Peters presented recent results from fungicide trials researchers have been conducting on Cavendish Farms. He reports that while Bravo worked well, the best results came from combining Bravo (or a protectant) and Confine (a systemic product).

For post harvest treatment, Peters stresses the importance of applying fungicides, like Confine, within six hours of harvesting the potatoes for the best suppression results. He adds that the application of Confine post-harvest didn’t affect the potatoes’ colour.

However, he cautions that too high a dose of Confine applied to the foliage in older plants or plants that have undergone stress can result in some burning on the leaves. As well, some negative impacts on seed sprouting have been reported.

“Our preliminary studies of 100 isolates in Minnesota, North Dakota and Nebraska indicate that [more than] 75 per cent of them were resistant to Endura (one of the brand names for Boscalid),” he said. “That is of some concern.

“We know of two mutations in the population. When we inoculated plants treated with Endura, we found that the more moderate mutation was up to 50 per cent resistant while the more serious mutation resulted in total resistance.”

A potato with diabetics in mind
Thirteen new selections developed by Agriculture and Agri-Food Canada potato breeders in Fredericton, N.B., are ready for release to industry for further trials.

The selections include a low glycemic potato with potential health benefits for diabetics and diet-conscious consumers. Recent research shows that healthy, low glycemic index diets have a range of benefits, including more sustainable weight loss and improvement in the management of diabetes. Low GI foods digest slowly. The reason lower GI foods are more desirable is they don’t create a big spike of insulin in the body.

Potato Research Centre potato breeder Dr. Benoit Bizimungu sees a low glycemic potato as a niche product that could help develop the market for a potato for diabetics and create a new market for farmers.

The next step is for the potato industry to test it and to see what they think.

There are a baker’s dozen potatoes on offer this year including varieties for the chip and french fry business. There are also a potato with red flesh, a high starch potato for industrial starch use and others for the fresh potato market.

Dr. Bizimungu is capitalizing on some new technologies to speed up potato variety development.

A Near Infrared Spectrometer and a Rheometer at the Potato Research Centre in Fredericton allow scientists to measure starch content and composition of potatoes with a simple test, cutting years of trial and error to identify desirable characteristics.

The 2012 selections can be seen on line at: www.agr.gc.ca/potato-cultivars.