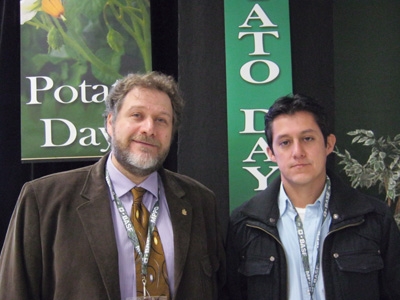 Mario Tenuta (left), a soil ecologist with the University of Manitoba, discussed verticillium wilt at the Manitoba Potato Production Days. He was joined by graduate student/researcher Oscar Molina.

University of Manitoba and University of North Dakota trials suggest that fumigation may be an effective method of killing or controlling verticillium.

Verticillium dahliae is the major culprit in the early dying of potatoes, explained Tenuta, adding that verticillium wilt is characterized by wilting leaves and browning in the stems. Tenuta noted the survival structures of verticillium, called microsclerotia, can survive in the soil for years.  They are resistant to light, heat and freezing temperatures.

Verticillium dahliae, he said, hurts the development of larger tubers in particular. The disease stunts their growth and cuts their weight.

The fight against Verticillium dahliae begins with soil testing in the spring before planting.

Tenuta and his team of researchers have been studying the use of fumigation – toxic gases – in killing verticillium propagules in the soil. Metam sodium – better known under the trade name Vapam – is the chemical most commonly used in the Pacific Northwest and California.

According to the label, for Vapam to be effective, growers need a decent soil temperature – producers can’t wait too late into the fall in most of Canada – with spacings of about six inches between entry points, explained Tenuta. He suggested that Vapam should be injected at least six inches into the soil although Neil Gudmestad’s research indicates the most effective treatment involves injecting Vapam 10 inches into the ground.

“We tried injecting Vapam at six inches and at 10 inches,” Gudmestad said. “The deeper application seems to be more effective at controlling verticillium wilt. We believe this is because the potatoes’ true roots lay below the seed piece.”

Gudmestad’s studies also demonstrated that, contrary to current belief, fumigation targeting Verticillium dahliae propagules can be carried out in temperatures as low as 39 F.

Tenuta said fumigation should be completed in the fall to give the toxic gas time to dissipate well before spring planting. The gas kills other organisms in the soil as well as the verticillium propagules.

The University of Manitoba soil ecologist described trials that his department has been conducting with Vapam in the Shilo area in western Manitoba beginning in 2007.

“We alternated Vapam and non-Vapam treatments on strips of land,” said Tenuta. “[In some strips] we had added verticillium to the soil. The other [strips] contained naturally present verticillium.”

“The application was done in spring, so it wasn’t a completely fair test,” he said. “It should be done in fall before potatoes.”

Another series of trials that Tenuta and his team have been carrying out in the Carberry, Man., area point to compost from animal manure and yellow mustard meal as equally effective in protecting potato plants from verticillium infection.

The team’s most recent trials, carried out over the past season in six different locations in Manitoba, have confirmed the earlier findings that verticillium is killed by the product.

“Some soils are high in verticillium propagules but the potatoes aren’t showing much disease,” he observed. “We think maybe the amount of organic matter in those soils is controlling the verticillium naturally. We need to ask if there is need for application on such soils.”

Gudmestad noted that crop rotation has also been shown to control verticillium propagules but added that a two-year rotation isn’t enough. Crop rotation needs to be carried through for three or four years to be most effective, he said.

Gudmestad noted that metam sodium seems to be most efficacious in sandy loam soils.

Tenuta also spoke about promising research involving the use of DNA to rapidly and more precisely provide soil testing to determine verticillium levels in soils.